Guinea pigs are Cavia porcellus, a kind of rodent. They are not pigs and are not from Guinea. They are domesticated animals which originated in the Andes.

They do not occur naturally in the wild. 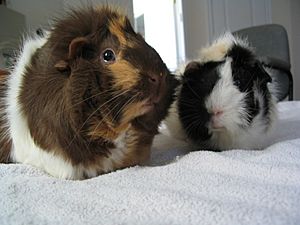 Guinea pigs are large for rodents, weighing between 700 and 1200g (1.5-2.5 pounds), and measuring between 20 and 25 cm (8–10 inches) in length. They typically live an average of four to five years, but may live as long as eight years. According to the 2006 Guinness Book of Records the longest living guinea pig survived 14 years, 10.5 months. 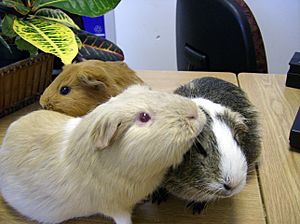 Guinea pigs can learn complex paths to food, and can accurately remember a learned path for months. Their strongest problem solving strategy is motion. While guinea pigs can jump small obstacles, they cannot climb, and are not particularly agile. They startle extremely easily, and will either freeze in place for long periods or run for cover with rapid, darting motions when they sense danger. Larger groups of startled guinea pigs will "stampede", running in haphazard directions as a means of confusing predators. When excited, guinea pigs may repeatedly perform little hops in the air (known as "popcorning"), a movement analogous to the ferret's war dance. They are also exceedingly good swimmers.

Like many rodents, guinea pigs sometimes participate in social grooming, and they regularly self-groom. A milky-white substance is secreted from their eyes and rubbed into the hair during the grooming process. Groups of boars will often chew each other's hair, but this is a method of establishing hierarchy within a group, rather than a social gesture. Dominance is also established through biting (especially of the ears), piloerection, aggressive noises, head thrusts, and leaping attacks.

In many parts of the world, people keep them as pets. In Peru, Bolivia, and several other countries, they are raised for food. The first people who domesticated the animals, did it for food. Besides being a pet and a source of food, in some places people think guinea pigs keep bad spirits away. In Quechua, the language of some the native tribes of Peru, they are called quivi. The Spanish-speaking people of the region call them cuy (plural: cuyes).

Guinea pigs have poor sight, but well-developed senses of hearing, smell, and touch. Vocalization is the primary means of communication between members of the species. 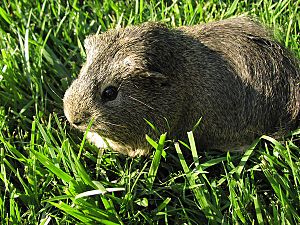 Grass is the guinea pig's natural diet. Their molars are particularly suited for grinding plant matter, and grow continuously throughout the animal's life.

Guinea pigs benefit from feeding on fresh grass hay in addition to food pellets. Alfalfa is also a popular food choice; most guinea pigs will eat large amounts of alfalfa when offered it. Some pet owners and veterinary organizations have advised that, as a legume rather than a grass hay, alfalfa consumed in large amounts may lead to obesity, as well as bladder stones due to excess calcium, in any but pregnant and very young guinea pigs. However, published scientific sources mention alfalfa as a source for replenishment of protein, amino acids, and fiber.

Guinea pigs need large open air cages in which to romp and frolic. They should have a diet of 1/8 cup of high quality grass-based guinea-pig pellets daily, as per manufacturer’s instructions. They should also have unlimited grass hay, and at least one cup of a variety of veggies. Guinea pigs like to be held in hand. Guinea pigs should be kept in cages larger than 7.5 square feet or 10.5 square feet for 2 pigs. They should always have a friend as guinea pigs are social animals. Breeding guinea pigs are not recommended as the rate of pregnancy complications is high.

Other uses of the term

Guinea pig is also slang for a person who is the first to try something. It can also mean the subject of an experiment. This is because guinea pigs are used by scientists to do biology experiments.

All content from Kiddle encyclopedia articles (including the article images and facts) can be freely used under Attribution-ShareAlike license, unless stated otherwise. Cite this article:
Guinea pig Facts for Kids. Kiddle Encyclopedia.