Kids Encyclopedia Facts
This page is about the zoo near Stanley Park, opened in 1972. For the "Blackpool Zoo" that existed before 1972, see Blackpool Tower#Menagerie and aquarium. 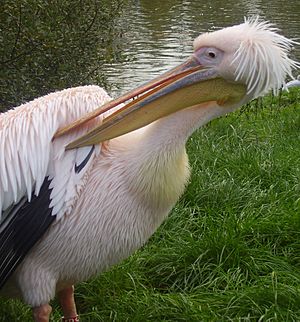 Pelican outside the lemur walkthrough

Blackpool Zoo is a 32-acre (13 ha) zoo, owned by Parques Reunidos and located in the sea-side resort of Blackpool, Lancashire, England. It provides a home to over 1,350 animals from all over the world.

The zoo opened in 1972 on a site which had previously been the Stanley Park Aerodrome.

2005 saw the opening of the 'Dinosaur Safari', a walkthrough exhibition featuring models of 32 life-size dinosaurs around a trail. "Amazonia" opened in 2006. This is a walk-through enclosure of South American animals and birds including squirrel monkeys.

Giraffes were re-introduced to the zoo in 2008, after an absence of fourteen years, and over £0.5m was invested in the new giraffe house and pens.

In summer 2009, penguins were to be added to the list of animals at the zoo, with the arrival of twenty Magellanic penguins from two Spanish conservation centres. A £1m sealion pool was opened in May 2010 along with the addition of a male sealion from Spain. 2011 saw the opening of a new Children's Farm and the expansion and refurbishment of the main restaurant.

In 2018, the zoo opened a new elephant exhibit - Project Elephant Base Camp.

Reopened in 2014, following a £1 million transformation, Orangutan Outlook is home to four Bornean orangutans - a male named Ramon and three females; Cherie, Summer (Cherie's sister) and Jingga (arrived in 2017 from Barcelona Zoo). The upper viewing area is also home to a tank with Chinese water dragons and a Philippine sailfin lizard. Vicky, the first orangutan to be born at the zoo and mother of Cherie and Summer's mother died in 2019.

Project Elephant is the single biggest development investment in the zoo's history and was built on previously undeveloped land. The multimillion-pound investment includes an outdoor grass paddock, sand paddock, pool and the largest indoor elephant house in the UK.

In 2017, the zoo's female elephant, Kate, moved into her new home. She has since been joined by four female elephants, Noor-Jahan, Esha, Tara and Minbu, from Twycross Zoo. The new house, named Project Elephant Base Camp, opened to the public in March 2018. Two more females, Noorjahan and Esha, arrived from Twycross Zoo during summer 2018.. In October 2019 bull elephant Emmett arrived from Whipsnade Zoo as part of the European Endangered Species Programme and he is the first bull elephant in the 47th history at Blackpool Zoo.

In summer 2018, the reptile house was closed to the public and is due for renovations.

The zoo's sea lion pool, which houses California sea lions, was first built in the 1970s and is the largest sea lion pool in a British zoo. It has a 250-seat arena that allows visitors to watch the sea lions interact with their trainers, who use positive reinforcement training. The penguin enclosure, which is next to the sea lion pool, opened in 2009 and houses Magellanic penguins. Blackpool Zoo is the only zoo in the UK to keep this species.

Opened in 2008, Giraffe Heights is home to four female giraffes, named O'Grady, Evie, Olympia and Tiye. During the summer months, two blesbok antelopes share the outdoor grass paddock with the giraffes. The enclosure includes a walkway where visitors can book encounters to hand-feed the giraffes.

The zoo's big cat collection consists of an all-male pride of African lions (comprising Wallace and his cub, Khari, who was born in May 2015), and an Amur tiger (a female named Alyona). The zoo's male Amur tiger died in October 2018.

Wolf Ridge was opened in 2012 and built on land which was previously unused. It houses three Iberian wolves.

Opened in 2010, this enclosure displays red-necked wallabies and both western grey and red kangaroos.

One of the oldest functioning animal houses in the zoo, the small primate house is the centre of the zoo's primate collection and includes: De Brazza's monkeys, pileated gibbons, L'Hoest's monkeys, king colobus, ring-tailed lemurs, red titis, emperor tamarins and grey mouse lemurs. Prevost's squirrels are by the entrance and inside is a herp exhibit for Graham's anoles and White's tree frogs.

The zoo has a long lake that is divided into two. One section is for great white pelicans, and the other side is for American flamingos and several waterfowl species including: red-breasted geese, ruddy shelducks, Ross's geese, greylag geese, emperor geese, brown pintails, red-crested pochards and several others. There is also an island in the flamingo part for emperor tamarins.

What was once the zoo's nocturnal house, this building has now been converted into the main house for red titis which the zoo holds the studbook for. Also to be seen here a dwarf mongooses and Emei Shan liocichlas.

Dinosaur Safari is a walk-through area opened in 2005. It displays over thirty life-size, fiberglass statues of extinct animals, including Tyrannosaurus rex, Triceratops, Stegosaurus, Tanystropheus, Dimetrodon, Spinosaurus, Smilodon and the woolly mammoth, among others. The area has undergone a significant transformation and reopened in July 2019 with newly painted dinosaurs, landscaped gardens, fresh signage, new animatronic dinosaurs, a fossil dig and a fully functioning water display from a central volcano.

When the zoo opened in 1972, British engineering firm Severn Lamb built the Blackpool Zoo Miniature Railway. The railway is 15 in (381 mm) gauge and about 700 yards (640 m) long. Severn Lamb originally supplied two diesel locomotives which had steam-outline bodies of American appearance, and four toastrack carriages. Half of this rolling stock has since been disposed of, leaving two carriages and one locomotive operating the public service. The railway is open on zoo opening days, and there is an additional charge to ride it.

Wheelchairs and pushchairs are available to hire from the zoo's reception. The zoo is built on entirely flat land with all areas being easily accessible.

Blackpool Zoo features two main catering outlets, with a number of additional satellite kiosks. The main cafe, known as the Lakeview Cafe, serves a mixture of hot food, fast food, salads and drinks. There is an adjoining conservatory selling ice creams and refreshments.

In the main entrance there is a coffee shop, selling light snacks and Starbucks drinks. A new Asian themed eatery has recently opened near the Dinosaur Safari, serving noodles and rice dishes. The BBQ Kiosk towards the rear of the park serves hot dogs, chips and refreshments during the summer months.

There are two main shops in the zoo - one located within the main entrance building and a smaller, seasonal shop located adjoining the Amazonia exhibit.

The zoo features a lecture theatre and smaller meeting room which are available to hire for private functions.

Entry to the Playbarn is additional to the zoo, and it can be used by members of the public without needing to visit the zoo.

All content from Kiddle encyclopedia articles (including the article images and facts) can be freely used under Attribution-ShareAlike license, unless stated otherwise. Cite this article:
Blackpool Zoo Facts for Kids. Kiddle Encyclopedia.