The mountain zebra (Equus zebra) is a zebra species in the family Equidae.

It is native to south-western Angola, Namibia, and South Africa. 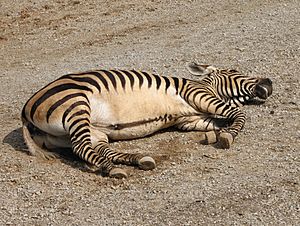 Mountain zebras are found on mountain slopes, open grasslands, woodlands, and areas with sufficient vegetation, but their preferred habitat is mountainous terrain, especially escarpment with a diversity of grass species.

Mountain zebras live in hot, dry, rocky, mountainous and hilly habitats. They prefer slopes and plateaus as high as 2,000 m (6,600 ft) above sea level, although they do migrate lower during winter. Their preferred diet is tufted grass, but in times of shortage, they browse, eating bark, twigs, leaves, buds, fruit, and roots.

They drink every day. When no surface water is available due to drought, they commonly dig for ground water in dry river beds.

The Cape mountain zebra and Hartmann's mountain zebra are now allopatric, meaning that their present ranges do not overlap, which prevents them from crossbreeding. This was not always so, and the current situation is a result of their populations being fragmented when hunters exterminated them throughout the Northern Cape Province of South Africa. Historically, mountain zebras could be found across the entire length of the escarpments along the west coast of southern Africa and in the fold mountain region in the south. However, they generally inhabited poorly productive land and were nowhere really numerous in comparison to those species of zebras or antelope that inhabited the plains, for example. 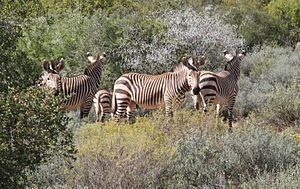 A harem of Cape mountain zebras

Mountain zebras do not aggregate into large herds like plains zebras; they form small family groups consisting of a single stallion and one to five mares, together with their recent offspring. Bachelor males live in separate groups, and mature bachelors attempt to capture young mares to establish a harem. In this they are opposed by the dominant stallion of the group.

Mares give birth to one foal at a time. The foal feeds mainly on its mother's milk for about a year, after which it is weaned onto solid forage. Cape mountain zebra foals generally move away from their maternal herds sometime between the ages of 13 and 37 months. However, with Hartmann's mountain zebra, mares try to expel their foals when they are aged around 14 to 16 months. Young males may wander alone for a while before joining a bachelor group, while females are either taken into another breeding herd or are joined by a bachelor male to form a new breeding herd.

The main threats to the species are the loss of habitat to agriculture, hunting, and persecution. Poaching for food (for example, during guerrilla fighting) has decreased their numbers.

The species is listed as vulnerable under the IUCN Red List. The Cape mountain zebra was hunted to near extinction. In the 1930s, their population was reduced to about 100 individuals. However, consistent and vigorous conservation measures have succeeded in reversing the decline, and in 1998, the population of the Cape mountain zebra was estimated to have increased to some 1200, about 540 in national parks, 490 in provincial nature reserves, and 165 in other reserves. However, the population has increased to about over 2,700 in the wild due to conservation efforts.

Though both mountain zebra subspecies are currently protected in national parks, they are still threatened. The European Zoos Endangered Species Program and co-operative management of zoo populations worldwide have been set up for them.

All content from Kiddle encyclopedia articles (including the article images and facts) can be freely used under Attribution-ShareAlike license, unless stated otherwise. Cite this article:
Mountain zebra Facts for Kids. Kiddle Encyclopedia.