The South American tapir (Tapirus terrestris), also commonly called the Brazilian tapir (from the Tupi tapi'ira), the Amazonian tapir, the maned tapir, the lowland tapir, in Portuguese anta, and in mixed Quechua and Spanish sachavaca (literally "bushcow"), is one of the four widely recognized species in the tapir family, along with the mountain tapir, the Malayan tapir, and Baird's tapir. It is the largest surviving native terrestrial mammal in the Amazon. 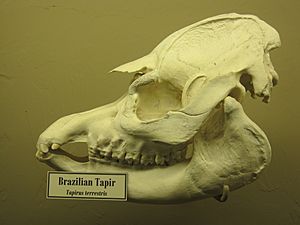 The South American tapir can be found near water in the Amazon Rainforest and River Basin in South America, east of the Andes. Its geographic range stretches from Venezuela, Colombia, and the Guianas in the north to Brazil, Argentina, and Paraguay in the south, to Bolivia, Peru, and Ecuador in the west. On rare occasions, waifs have crossed the narrow sea channel from Venezuela to the southern coast of the island of Trinidad (but no breeding population exists there).

T. terrestris is an excellent swimmer and diver, but also moves quickly on land, even over rugged, mountainous terrain. It has a life span of approximately 25 to 30 years. In the wild, its main predators are crocodilians (only the black caiman and Orinoco crocodile, the latter of which is critically endangered, are large enough to take these tapirs, as the American crocodile only exists in the northern part of South America) and large cats, such as the jaguar and cougar, which often attack tapirs at night when tapirs leave the water and sleep on the riverbank. The South American tapir is also attacked by the green anaconda (Eunectes murinus). T. terrestris is known to run to water when scared to take cover.

There is a need for more research to better explore social interactions. 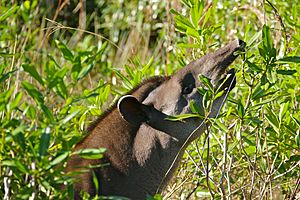 The South American tapir is an herbivore. Using its mobile nose, it feeds on leaves, buds, shoots, and small branches it tears from trees, fruit, grasses, and aquatic plants. They also feed on the vast majority of seeds found in the rainforest. This is known because the diet is studied through observation of browsing, analysis of feces, and studying stomach contents. 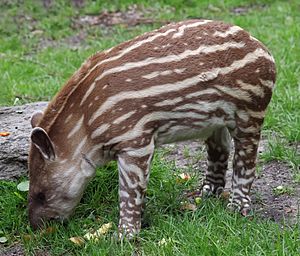 A calf of the South American tapir.

Females go through a gestation period of 13 months (390–395 days) and will typically have one offspring every two years. A newborn South American tapir weighs about 15 pounds (6.8 kilos) and will be weaned in about six months.

The dwindling numbers of the South American tapir are due to poaching for meat and hide, as well as habitat destruction. T. terrestris is generally recognized as an endangered animal species, with the species being designated as endangered by the United States Fish and Wildlife Service on June 2, 1970. It has a significantly lower risk of extinction, though, than the other four tapir species.

All content from Kiddle encyclopedia articles (including the article images and facts) can be freely used under Attribution-ShareAlike license, unless stated otherwise. Cite this article:
South American tapir Facts for Kids. Kiddle Encyclopedia.