The Malayan Tapir (Tapirus indicus), also called the Asian Tapir, is the largest of the five species of tapir and the only one native to Asia. The scientific name refers to the East Indies, the species' natural habitat. In the Malay, the tapir is commonly referred to as "cipan", "tenuk" or "badak tampong".

The animal is easily identified by its markings, most notably the light-colored patch that extends from its shoulders to its rear end. The rest of its hair is black, except for the tips of its ears, which, as with other tapirs, are rimmed with white. This pattern is for camouflage; the disrupted coloration makes it more difficult to recognize it as a tapir, and other animals may mistake it for a large rock rather than prey when it is lying down to sleep. 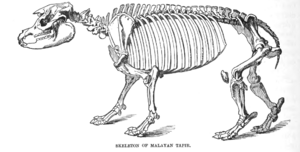 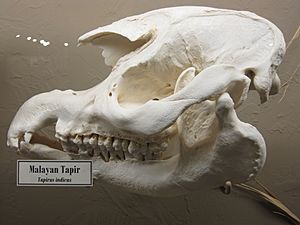 Photo of a Malayan Tapir Skull, on display at the Museum of Osteology

They have a large sagittal crest, a bone running along the middle of the skull that is necessary for muscle attachment. They also have unusually positioned orbits, an unusually shaped cranium with the frontal bones elevated, and a retracted nasal incision. All of these modifications to the normal mammal skull are, of course, to make room for the proboscis. This proboscis caused a retraction of bones and cartilage in the face during the evolution of the tapir, and even caused the loss of some cartilages, facial muscles, and the bony wall of the nasal chamber.

Malayan tapirs have very poor eyesight, making them rely greatly on their excellent sense of smell and hearing to go about in their everyday lives. They have small, beady eyes with brown irises on either side of their faces. Their eyes are often covered in a blue haze, which is corneal cloudiness thought to be caused by repetitive exposure to light. Corneal cloudiness is a condition in which the cornea starts to lose its transparency. The cornea is necessary for the transmitting and focusing of outside light as it enters the eye, and cloudiness can cause vision loss. This causes the Malayan tapir to have very inadequate vision, both on land and in water, where they spend the majority of their time. Also, as these tapirs are most active at night and since they have poor eyesight, it is harder for them to search for food and avoid predators in the dark.

A small number of melanistic (all-black) Malayan tapirs have been observed. In 1924, an all-black tapir was sent to Rotterdam Zoo and was classified as a subspecies called Tapirus indicus brevetianus after its discoverer, Captain K. Brevet. In 2000, two melanistic tapirs were observed during a study of tigers in the Jerangau Forest Reserve in Malaysia. The cause of this variation may be a genetic abnormality similar to that of black panthers that appear in populations of spotted jaguars. However, unless and until more T. i. brevetianus individuals can be studied, the precise explanation for the trait will remain unknown. 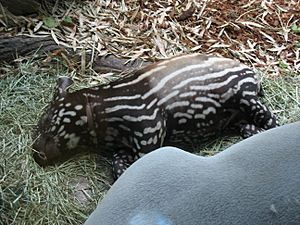 The gestation period of the Malayan tapir is about 390–395 days, after which a single offspring, weighing around 15 pounds (6.8 kg), is born. Malayan tapirs are the largest of the five tapir species at birth and grow more quickly than their congeners. Young tapirs of all species have brown hair with white stripes and spots, a pattern that enables them to hide effectively in the dappled light of the forest. This baby coat fades into adult coloration between four and seven months after birth. Weaning occurs between six and eight months of age, at which time the babies are nearly full-grown, and the animals reach sexual maturity around age three. Breeding typically occurs in April, May or June, and females generally produce one calf every two years. Malayan tapirs can live up to 30 years, both in the wild and in captivity.

Malayan tapirs are primarily solitary creatures, marking out large tracts of land as their territory, though these areas usually overlap with those of other individuals. Tapirs mark out their territories by spraying urine on plants, and they often follow distinct paths, which they have bulldozed through the undergrowth. 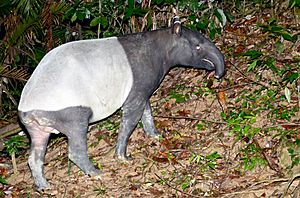 Exclusively herbivorous, the animal forages for the tender shoots and leaves of more than 115 species of plants (around 30 are particularly preferred), moving slowly through the forest and pausing often to eat and note the scents left behind by other tapirs in the area. However, when threatened or frightened, the tapir can run quickly, despite its considerable bulk, and can also defend itself with its strong jaws and sharp teeth. Malayan tapirs communicate with high-pitched squeaks and whistles. They usually prefer to live near water and often bathe and swim, and they are also able to climb steep slopes. Tapirs are mainly active at night, though they are not exclusively nocturnal. They tend to eat soon after sunset or before sunrise, and they will often nap in the middle of the night. This behavior characterizes them as crepuscular animals. 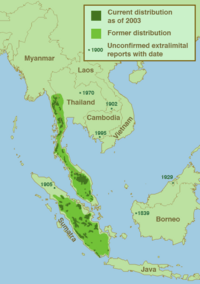 Map of Malayan tapir distribution in the wild, data circa 2003

The Malayan tapir was once found throughout the tropical lowland rainforests of Southeast Asia, including Cambodia, Indonesia, Laos, Malaysia, Myanmar (Burma), Thailand, and Vietnam. However, its numbers have decreased in recent years, and today, like all tapirs, it is in danger of extinction. Because of their size, tapirs have few natural predators, and even reports of killings by tigers are scarce. The main threat to the Malayan tapirs is human activity, including deforestation for agricultural purposes, flooding caused by the damming of rivers for hydroelectric projects, and illegal trade. In Thailand, for instance, capture and sale of a young tapir may be worth US$5500.00. In areas such as Sumatra, where the population is predominantly Muslim, tapirs are seldom hunted for food, as their physical similarity to pigs has made tapir meat a taboo, but in some regions they are hunted for sport or shot accidentally when mistaken for other animals. Protected status in Malaysia, Indonesia, and Thailand, which seeks to curb deliberate killing of tapirs but does not address the issue of habitat loss, has had limited effect in reviving or maintaining the population.

All content from Kiddle encyclopedia articles (including the article images and facts) can be freely used under Attribution-ShareAlike license, unless stated otherwise. Cite this article:
Malayan Tapir Facts for Kids. Kiddle Encyclopedia.