A black panther is the melanistic colour variant of any Panthera, particularly of the leopard (P. pardus) in Asia and Africa, and the jaguar (P. onca) in the Americas. Black panthers of both species have excess black pigments, but their typical spotted markings are also present. Melanism in the leopard is caused by a recessive allele, and in the jaguar by a dominant allele.

A melanistic leopard in Out of Africa Wildlife Park in Camp Verde, Arizona 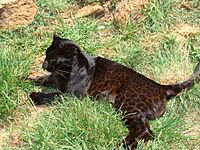 Markings on a female black leopard at the Rhino and Lion Nature Reserve, Kromdraai

In 1788, Jean-Claude Delamétherie described a black leopard that was kept in the Tower of London and had been brought from Bengal. In 1794, Friedrich Albrecht Anton Meyer proposed the scientific name Felis fusca for this individual, the Indian leopard. In 1809, Georges Cuvier described a black leopard kept in the Ménagerie du Jardin des plantes that had been brought from Java. Cuvier proposed to name it Felis melas, the Javan leopard. By 1929, the Natural History Museum, London also had skins of black leopards collected in South Africa and Kanara in southern India.

Melanism in the leopard is conferred by a recessive allele. Melanistic and non-melanistic animals can be littermates. It is thought that melanism confers a selective advantage under certain conditions since it is more common in regions of dense forest, where light levels are lower. Preliminary studies also suggest that melanism might be linked to beneficial mutations in the immune system. The typical spotted markings are present but hidden due to the excess black pigments, which is called "ghost rosettes".

Frequency of melanism appears to be approximately 11% over the leopard's range. Data on the distribution of leopard populations indicates that melanism occurs in five subspecies in the wild: Indian leopard, Javan leopard, African leopard, Indochinese leopard (P. p. delacouri) and Sri Lankan leopard (P. p. kotiya). Based on records from camera traps, melanistic leopards occur foremost in tropical and subtropical moist forests. Melanistic leopards are common in Java, and are also reported from densely forested areas in southwestern China, Myanmar, Assam and Nepal, from Travancore, and some parts of southern India where they may be more numerous than spotted leopards. Most leopards recorded at 16 sites south of the Kra Isthmus between 1996 and 2009 were black, indicating a near fixation of melanism in peninsular Malaysia.

A pseudo-melanistic leopard has a normal background color, but the spots are more densely packed than normal and merge to obscure the golden-brown background color. Any spots on the flanks and limbs that have not merged into the mass of swirls and stripes are unusually small and discrete, rather than forming rosettes. The face and underparts are paler and dappled like those of ordinary spotted leopards.

A melanistic jaguar at the Henry Doorly Zoo

Melanism in the jaguar is caused by deletions in the melanocortin 1 receptor gene and conferred by a dominant allele.

There is no authenticated case of a truly melanistic cougar. None was photographed or killed in the wild, and none has ever been bred. Unconfirmed sightings known as the "North American black panther" are currently attributed to errors in species identification by non-experts, and by the mimetic exaggeration of size.

All content from Kiddle encyclopedia articles (including the article images and facts) can be freely used under Attribution-ShareAlike license, unless stated otherwise. Cite this article:
Black panther Facts for Kids. Kiddle Encyclopedia.