As of 2015[update], fewer than 60 individuals were estimated to survive in Russia and China. Camera-trapping surveys conducted between 2014 and 2015 revealed 92 individuals in a 8,398 km2 (3,242 sq mi) large area along the Russian-Chinese border.

Results of genetic research indicate that the Amur leopard is genetically close to leopards in northern China and Korea, suggesting that the leopard population in this region became fragmented in the early 20th century. 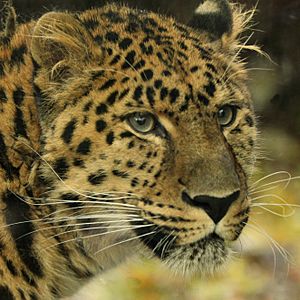 The close-up of face at Diergaarde Blijdorp

Hermann Schlegel first described an Amur leopard in 1857 on the basis of a skin from Korea.

Amur leopards differ from other subspecies by a thick coat of spot-covered fur. Leopards from the Amur River basin, the mountains of north-eastern China and the Korean Peninsula have pale, cream-colored coats, particularly in winter. Rosettes on the flanks are 5 cm × 5 cm (2.0 in × 2.0 in) and widely spaced, up to 2.5 cm (0.98 in), with thick, unbroken rings and darkened centers.

Their coat is fairly soft with long and dense hair. The length of hair on the back is 20–25 mm (0.79–0.98 in) in summer and up to 70 mm (2.8 in) in winter. The winter coat varies from fairly light yellow to dense yellowish-red with a golden tinge or rusty-reddish-yellow. The summer coat is brighter with more vivid coloration pattern.

Amur leopards have long limbs and are well adapted to walking through deep snow. They can run at 37 mi (60 km) per hour 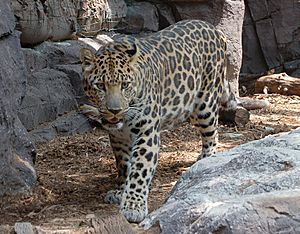 The Amur leopard is the only Panthera pardus subspecies adapted to a cold snowy climate. Fossils of leopards from the Pleistocene period have been excavated in Japan.

The distribution of the Amur leopard has been reduced to a fraction of its original range. It once extended throughout northeastern ("Manchurian") China and throughout the Korean Peninsula. The species range in Russia was dramatically reduced during the seventies, losing about 80% of its former range.

Today, the Amur leopard inhabits about 5,000 km2 (1,900 sq mi). The last remaining viable wild population, estimated at 57 individuals, is found in a small area in the Russian Province of Primorsky Krai, between Vladivostok and the Chinese border.

In adjacent China, 7-12 scattered individuals are estimated to remain. In South Korea, the last record of an Amur leopard dates back to 1969, when a leopard was captured on the slopes of Odo Mountain, in South Gyeongsang Province.

Leopards cross between Russia, China, and North Korea across the Tumen River despite a high and long wire fence marking the boundary. 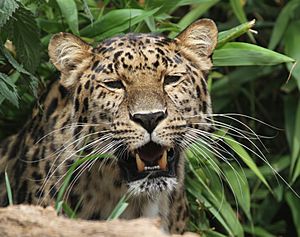 Amur leopard numbers have been reduced via over hunting of prey and poaching combined with habitat loss from agricultural and urban development.

However, both camera-trapping and snow-tracking surveys indicate that the population has been stable over the last 30 years, but with a high rate of turnover of individuals. If appropriate conservation actions are taken, there is great potential for increasing population size, increasing survival rates and habitat recovery in both Russia and China. 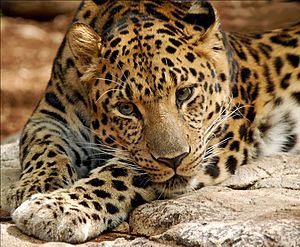 Amur Leopard At the Audubon Zoo in New Orleans

Amur leopards are crepuscular and usually start hunting shortly before sunset. They are active again in the early mornings. During the day, they rest and hide in caves or dense thickets, but rarely hunt. They are solitary, unless females have offspring. 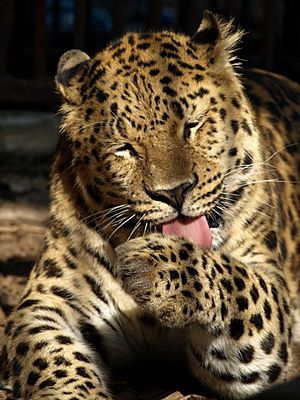 Amur Leopard in the zoo in Děčín, Czech Republic

They may use the same hunting trails, routes of constant migration, and even places for extended rest constantly over the course of many years. 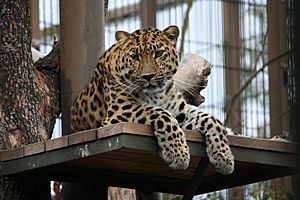 An Amur leopard at the Helsinki Zoo

Sexual maturity sets in at the age of 2–3 years and ability to reproduce continues up to 10–15 years of age. Amur leopards breed in spring and early summer. The breeding season is in the late winter months, usually around January or February.

The weight of a newborn cub is 500–700 g (1.1–1.5 lb). The young open their eyes on the 7th–10th day and begin to crawl on the 12th–15th day. By the second month they emerge from their dens and also begin to eat meat. Cubs begin to be weaned at three months and taught to hunt.

Lactation continues for five or six months. Cubs reach independence at approximately two to three years old. They stay with their mother until they are around eighteen months to two years in age.

Breeding can take place year-round, and average litter size is 2-3 cubs. Amur leopards can live up to 20 years in captivity, but the average lifespan in the wild is unknown. 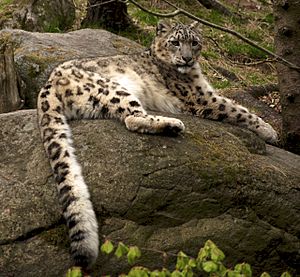 The Amur Leopard and Tiger Alliance (ALTA) is an initiative of Russian and Western conservation organisations to conserve the Amur leopard and Amur tiger, and secure a future for both species in the Russian Far East and Northeast China.

An oil pipeline planned to be built through leopard habitat was rerouted, following a campaign by conservationists.

Reintroduction into the wild 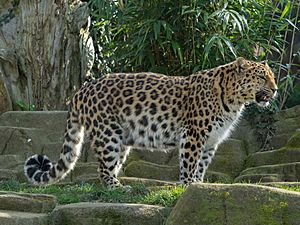 Since 1996, the idea of reintroducing leopards in the south of Sikhote-Alin has been discussed by ALTA members.

Amur leopards are top predators which means they play a crucial role in maintaining a healthy balance of species within their habitat. This in turn influences the condition of the forest and overall ecosystem – which supplies both nature and people with food, freshwater and many other resources. 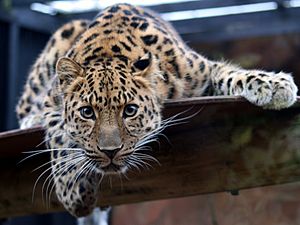 A captive population of Amur leopards was established in 1961 from nine wild-born founders.

As of December 2011, 173 captive Amur leopards are in zoos worldwide. In American and Canadian zoos, another 31 males and 41 females are kept within the Population Management Program.

In China, another Amur leopard captive population is in Beijing Zoo, the founders of which were from North Korea.

All content from Kiddle encyclopedia articles (including the article images and facts) can be freely used under Attribution-ShareAlike license, unless stated otherwise. Cite this article:
Amur leopard Facts for Kids. Kiddle Encyclopedia.