Results of genetic analysis indicate that the snow leopard also belongs to the Panthera, a classification that was accepted by IUCN assessors in 2008. The genus Neofelis is also closely related.

The tiger, lion, leopard, and jaguar are the only cat species with the anatomical structure that enables them to roar. The primary reason for this was formerly assumed to be the incomplete ossification of the hyoid bone. However, new studies show the ability to roar is due to other morphological features, especially of the larynx. The snow leopard does not roar. Although its hyoid bone is incompletely ossified, it lacks the special morphology of the larynx.

In Panthera species, the dorsal profile of the skull is flattish or evenly convex. The frontal interorbital area is not noticeably elevated, and the area behind the elevation is less steeply sloped. The basicranial axis is nearly horizontal. The inner chamber of the bullae is large, the outer small. The partition between them is close to the external auditory meatus. The convexly rounded chin is sloping. All Panthera species have an incompletely ossified hyoid bone. Specially adapted larynx with proportionally larger vocal folds are covered in a large fibro-elastic pad. These characteristics enable all Panthera species except snow leopard to roar. Panthera species can prusten, which is a short, soft, snorting sound; it is used during contact between friendly individuals. The roar is an especially loud call with a distinctive pattern that depends on the species.

During the 19th and 20th centuries, various explorers and staff of natural history museums suggested numerous subspecies, or at times called races, for all Panthera species. The taxonomist Pocock reviewed skins and skulls in the zoological collection of the Natural History Museum, London and grouped subspecies described, thus shortening the lists considerably. Since the mid-1980s, several Panthera species became subject of genetic research, mostly using blood samples of captive individuals. Study results indicate that many of the lion and leopard subspecies are questionable because of insufficient genetic distinction between them. Subsequently, it was proposed to group all African leopard populations to P. p. pardus and retain eight subspecific names for Asian leopard populations.

Black panthers do not form a distinct species, but are melanistic specimens of the genus, most often encountered in the leopard and jaguar. 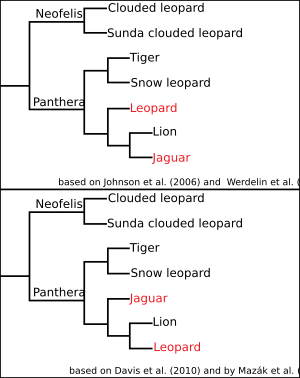 The cladogram below follows Mazák, Christiansen and Kitchener (2011).

In 2018, results of a phylogenetic study on living and fossil cats were published. This study was based on the morphological diversity of the mandibles of saber-toothed cats, their speciation and extinction rates. The generated cladogram indicates a different relation of the Panthera species, as shown below:

The following list of the genus Panthera is based on the taxonomic assessment in Mammal Species of the World and reflects the taxonomy revised in 2017 by the Cat Classification Task Force of the Cat Specialist Group:

All content from Kiddle encyclopedia articles (including the article images and facts) can be freely used under Attribution-ShareAlike license, unless stated otherwise. Cite this article:
Panthera Facts for Kids. Kiddle Encyclopedia.