Kids Encyclopedia Facts
Not to be confused with the cougar, sometimes also referred to as "American lion".

The American lion (Panthera leo or P. atrox) is also known as Naegele’s giant jaguar or American cave lion. It is an extinct species of lion which lived in North America during the Pleistocene (340,000 years ago to 11,000 years ago). It existed for about 330,000 thousand years.

The American lion belonged to the family Felidae. By analysing the species' genes, scientists have shown that it shared the same ancestor as the Eurasian cave lion. Most remains have come from the La Brea tar pits.

The American lion was large, about 25% larger than the modern African lion. There is no evidence that it was a social hunter like the modern lion, and that may explain its size. 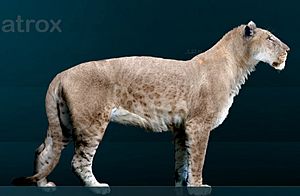 Reconstruction of an American lion

About 80 American lion individuals have been recovered from the La Brea Tar Pits in Los Angeles, so their morphology is well known. Their features strongly resemble those of modern lions, but they were considerably larger, and are believed to have been the largest subspecies of lion.

The earliest lions known in the Americas south of Alaska are from the Sangamonian Stage - the last interglacial period - following which, the American lion spread from Alberta to Maryland, reaching as far south as Chiapas, Mexico.

The American lion was formerly believed to have colonized northwestern South America as part of the Great American Interchange. However, the fossil remains found in the tar pits of Talara, Peru actually belong to an unusually large jaguar. On the other hand, fossils of a large felidae from late Pleistocene localities in southern Chile and Argentina have been reported to be remains of the American lion. 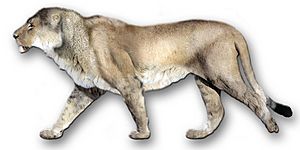 Reconstruction of the American lion

The American lion inhabited savannas and grasslands like the modern lion. In some areas of their range, American lions lived under cold climatic conditions. They probably used caves for shelter from the cold weather in those areas. They may have lined their dens with grass or leaves, as the Siberian tiger does, a tiger subspecies that lives in North Asia.

The remains of American lions are not abundant at the La Brea Tar Pits, which suggests that they may have been smart enough to avoid tar traps. 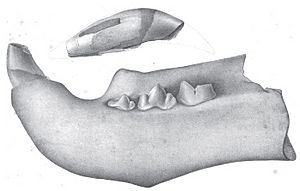 Illustration of the type specimen from Leidy 1852

The American lion went extinct along with most of the Pleistocene megafauna during the Quaternary extinction event. The most recent fossil, from Edmonton, dates to 11,355 years ago. American lion bones have been found in the trash heaps of Paleolithic Native Americans, suggesting human predation may have contributed to its extinction.

A replica of the jaw of the first American lion specimen to be discovered can be seen in the hand of a statue of famous paleontologist Joseph Leidy, currently standing outside the Academy of Natural Sciences in Philadelphia.

All content from Kiddle encyclopedia articles (including the article images and facts) can be freely used under Attribution-ShareAlike license, unless stated otherwise. Cite this article:
American lion Facts for Kids. Kiddle Encyclopedia.