The clouded leopard (Neofelis nebulosa) is a wild cat occurring from the Himalayan foothills through mainland Southeast Asia into China. Since 2008, it is listed as Vulnerable on the IUCN Red List. Its total population is suspected to be fewer than 10,000 mature individuals, with a decreasing population trend, and no single population numbering more than 1,000 adults. The clouded leopard is the state animal of the Indian state of Meghalaya.

Clouded leopards hunt in trees as well as on the ground. The genetic analysis of specimens suggests the species diverged 1.4 million years ago.

In captivity, they have an average lifespan of 11 years. One individual has lived to be almost 17 years old. As of December 2011, 222 clouded leopards are believed to exist in zoos. 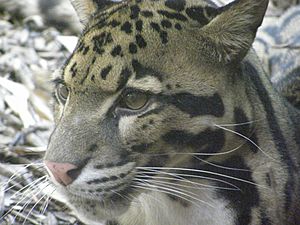 The fur of clouded leopards is of a dark grey or ochreous ground-color, often largely obliterated by black and dark dusky-grey blotched pattern.

Their irises are usually either grayish-green or brownish-yellow in color. Their legs are short and stout, with broad paws. They have rather short limbs compared to the other big cats, but their hind limbs are longer than their front limbs to allow for increased jumping and leaping capabilities.

They have exceptionally long, piercing canine teeth. The upper pair of canines may measure 4 cm (1.6 in) or longer. They are often referred to as a “modern-day sabre-tooth” because they have the largest canines in proportion to their body size, matching the tiger in canine length. 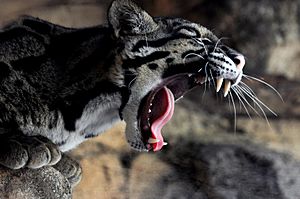 Clouded leopard in the San Antonio Zoo and Aquarium 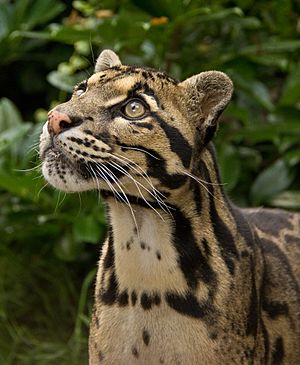 The clouded leopard is a solitary cat. Early accounts depict it as a rare, secretive, arboreal, and nocturnal inhabitant of dense primary forest. Clouded leopards are the most talented climbers among the cats. In captivity, they have been observed to climb down vertical tree trunks head first, and hang on to branches with their hind paws bent around tree limbs. When balancing on thin branches, they use their long tails to steer. They can easily jump up to 1.2 m (3.9 ft) high.

They rest in trees during the day and hunt at night. When hunting, clouded leopards either come down from their perches in the trees and stalk their prey or lie and wait for the prey to come to them. After making a kill and eating, they usually retreat to the trees to digest and rest.

Their partly nocturnal and far-ranging behaviour, their low densities, and because they inhabit densely vegetated habitats and remote areas makes the counting and monitoring of clouded leopards extremely difficult. Consequently, little is known about their behaviour and status. 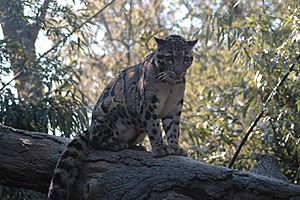 The clouded leopard occurs from the Himalayan foothills in Nepal, Bhutan and India to Myanmar, southeastern Bangladesh, Thailand, Peninsular Malaysia, Indochina, and in China south of the Yangtze River. It is regionally extinct in Singapore and Taiwan. The last confirmed record of a Formosan clouded leopard dates to 1989 in the Taroko area.

In Nepal, the clouded leopard was thought to be extinct since the late 1860s. But in 1987 and 1988, four individuals were found in the central part of the country, close to Chitwan National Park and in the Pokhara Valley. These findings extended the known range westward, suggesting it is able to survive and breed in degraded woodlands that previously harboured moist subtropical semideciduous forest. 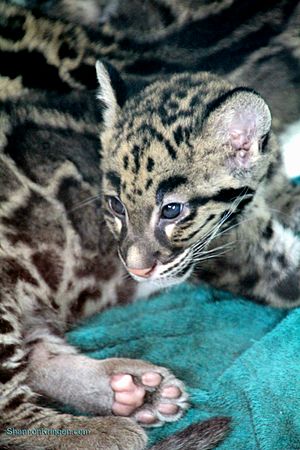 Females give birth to a litter of one to five, mostly three cubs. Initially, the young are blind and helpless, much like the young of many other cats, and weigh from 140 to 280 g (4.9 to 9.9 oz). Unlike adults, the kittens' spots are "solid" — completely dark rather than dark rings. The young can see within about 10 days of birth, are active within five weeks and are fully weaned at around three months of age. They attain the adult coat pattern at around six months, and probably become independent after around 10 months. Females are able to bear one litter each year.

In captivity, they have an average lifespan of 11 years. One individual has lived to be almost 17 years old. 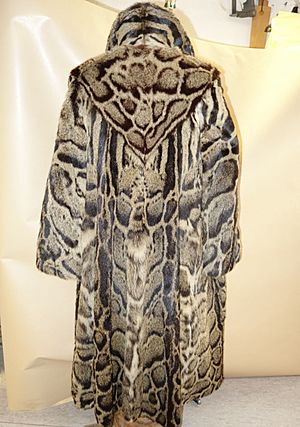 Many of the remaining forest areas are too small to ensure the long-term persistence of clouded leopard populations. They are threatened by habitat loss following large–scale deforestation and commercial poaching for the wildlife trade. Skins, claws, and teeth are offered for decoration and clothing, bones and meat as substitute for tiger in traditional Asian medicines and tonics, and live animals for the pet trade.

Hunting is banned in Bangladesh, China, India, Malaysia, Myanmar, Nepal, Taiwan, Thailand, and Vietnam. It is not legally protected outside Bhutan's protected areas. Hunting is regulated in Laos. No information about its protection status is available from Cambodia. These bans, however, are poorly enforced in India, Malaysia, and Thailand. The Rukai people of Taiwan considered the hunting of clouded leopards a taboo.

In the United States, the clouded leopard is listed as endangered under the Endangered Species Act, prohibiting trade in the animals or any parts or products made from them.

All content from Kiddle encyclopedia articles (including the article images and facts) can be freely used under Attribution-ShareAlike license, unless stated otherwise. Cite this article:
Clouded leopard Facts for Kids. Kiddle Encyclopedia.