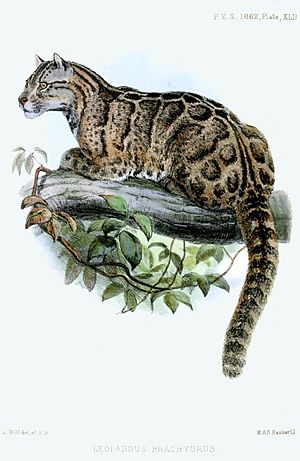 Gray described the genus Neofelis as having an elongate skull, a broad and rather produced face on the same plane as the forehead, a large and elongate nasal, a moderate orbit, a truncated lower jaw and very long conical upper and lower canine teeth with a sharp cutting hinder edge. This skull has resemblances to that of the fossil Smilodon, with very much elongated upper canines.

Pocock described the skull of Neofelis as recalling in general features that of Panthera pardus, especially in the shortness and wide separation of the frontal and malar postorbital processes, relative proportion of mandibular teeth; but differing in the greater posterior width of the nasals, the thicker, more salient inferior edge of the orbit, and the mandible being greatly elevated anteriorly.

The Sunda clouded leopard has longer upper canines and a narrower palate between them.

Neofelis species range from Nepal and Sikkim eastward to south China and Hainan, southeastward to Burma, Annam, the Malay Peninsula, Sumatra, Java and Borneo. They are most closely associated with primary evergreen tropical rainforest, but make use of other types of habitat. Sightings have also been made in secondary and logged forest, as well as grassland and scrub. In the Himalayan foothills they have been recorded up to 1,450 m (4,760 ft).

Deforestation is the foremost threat for both Neofelis species. They are also threatened by commercial poaching for the wildlife trade. Skins, claws and teeth are offered for decoration and clothing, bones and meat as substitute for tiger in traditional Asian medicines and tonics, and live animals for the pet trade. Few poaching incidents have been documented, but all range states are believed to have some degree of commercial poaching. In recent years, substantial domestic markets existed in Indonesia, Myanmar and Vietnam.

Both Neofelis species are listed in CITES Appendix I and are protected over most of their range. Hunting is banned in Bangladesh, Brunei, Cambodia, China, India, Indonesia, Malaysia, Myanmar, Nepal, Taiwan, Thailand, and Vietnam. Hunting regulations apply in Laos.

All content from Kiddle encyclopedia articles (including the article images and facts) can be freely used under Attribution-ShareAlike license, unless stated otherwise. Cite this article:
Neofelis Facts for Kids. Kiddle Encyclopedia.