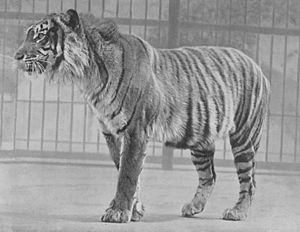 A Javan tiger in London Zoo before 1942

The Javan tiger (Panthera tigris sondaica) is 1 of 3 extinct types of tigers. It lived on the island of Java in Indonesia. It became extinct in the 1970s-1990s. The last known sighting of one was in 1972.

At the beginning of the 20th century, 28 million people lived on the island of Java. The annual production of rice was insufficient to adequately supply the growing human population, so that within 15 years, 150% more land was cleared for rice fields. In 1938, natural forest covered 23% of the island. By 1975, only 8% forest stand remained, and the human population had increased to 85 million people. In this human-dominated landscape, the extirpation of the Javan tiger was intensified by several circumstances and events:

All content from Kiddle encyclopedia articles (including the article images and facts) can be freely used under Attribution-ShareAlike license, unless stated otherwise. Cite this article:
Javan tiger Facts for Kids. Kiddle Encyclopedia.