Colchester Zoo is a zoological garden situated near Colchester, England. The zoo opened in 1963 and celebrated its 50th anniversary on 2 June 2013. It is home to many rare and endangered species, including big cats, primates and birds as well as many invertebrates and fish species.

The animals habitats at Colchester Zoo are presented in a number of different themed zones.

Opened in Spring 2015, Butterfly Glade is a walk through exhibit which is housed near Bears of the Rising Sun. It is home to many different species of butterflies, plants and flowers. It was opened in memory of Isobel Rose Parmenter who died in October 2014 from Langerhans cell histiocytosis.

Opened in summer 2014, Australian Rainbows is an exhibit that previously housed the Wild about Animals theatre. Inside the building is a waterfall, a large pond and colourful gardens. Visitors are able to journey through an aviary of lorikeets, with the opportunity to feed a treat of nectar to these colourful birds.

Within this exhibit there are two large pools housing a variety of koi carp. There are also two filtration systems visible to visitors. The exhibit is set in the style of a typical Japanese garden with statues, ornaments and waterfalls.

Walking Giants opened in the summer of 2012 and is split into two sections. The complex houses three out of four of the world’s biggest tortoise species including Aldabra giant tortoise, Asian forest tortoise, and African spurred tortoise.

Opened in Easter 2012, Lost Madagascar is a walk-through enclosure that is home to troops of ring-tailed lemurs and red-bellied lemurs. The exhibit can only be accessed by taking a ride on the zoo's road train, known as the Lost Madagascar Express.

Otter Creek was opened in August 2011 and houses a family of smooth-coated otters who are part of breeding programme around Europe, to help ensure there is a healthy population in captivity.

Wilds of Asia is a group of enclosures housing various different species from across Asia. Among the species on display in Wilds of Asia are pileated gibbons, red pandas, rhinoceros hornbill, binturongs, Burmese pythons and lion-tailed macaques.

Kingdom of the Wild

Kingdom of the Wild multi-species complex, which houses several different African species including reticulated giraffes, southern white rhinoceros, ostriches, zebras and greater kudu, while the indoor area features aardvarks, pygmy hippopotamus, patas monkeys and various species of African reptiles, invertebrates and fish, which include leopard tortoises. There is also an aviary, 'Vulture Valley' which is home to white-backed vultures and Ruppell's griffin vultures.

Elephant Kingdom is home to Colchester Zoo's herd of African elephants. It has a unique design which allows all the elephants maximum sight, sound and physical contact and has specially designed night stalls, a roped off "safe area" and spacious indoor bull elephant quarters.

Edge of Africa can be found within the far end of the zoo park, and houses cheetah, spotted hyena, mandrills, red river hogs, warthogs and other African species in large outdoor areas.

Opened in August 2003, Playa Patagonia is home to an all-female group of five Patagonian sea lions named Atlanta, Milan, Winnipeg, Paris and Sydney. The enclosure also features the largest straight underwater tunnel in Europe, holding 500,000 gallons of water and with glass that is 10 millimetres thick.

Orangutan Forest is home to one male orangutan. Named Tiga, a pure-bred Bornean orang-utan. It was the home of a hybrid of a Bornean and Sumatran orang-utan named Rajang who died at the age of 50 in 2018 having lived at the zoo since 1980.

Colchester Zoo is one of the few zoos in the UK approved to keep Komodo dragons and currently houses a number of komodo dragons and previously had breeding success within the EEP breeding programme for this species. The enclosure is designed to mimic conditions in the wild, and includes a large pool with showers, as well as a glass roof that can be drawn back to allow in sunlight.

Tiger Taiga is large complex area home to three Amur tigers, a male named Igor and two females called Taiga and Anoushka. With multiple areas, pools and a high viewing platform for the tigers as well as a viewing tunnel that runs through the enclosure leads viewers into the Nature Area.

Bears of the Rising Sun

This enclosure is home to a pair of sun bears, a male named Jo-Jo and a female named Srey-Ya. Both bears were given to the zoo by the Rare Species Conservation Centre in 2010, after being confiscated by government anti-poaching patrols in Cambodia.

Penguin Shores is home to a large colony of Humboldt penguins, as well as an aquarium containing various types of freshwater and coral reef fish.

Opened in May 2009, Suricata Sands houses a mob of thirteen meerkats, including a breeding pair named Robin and Pippa.

Opened in May 2008, Worlds Apart consists of six enclosures, which include an open enclosure home to rhinoceros iguanas, poison dart frogs, green and a walk-through small primate exhibit that houses emperor and cottontop tamarins.

The outdoor section of Worlds Apart. Among the animals on display are two-toed sloths, golden lion tamarins, silvery marmosets and southern tamandua.

Revamped in 2013, a new larger Chimp World houses a group of seven common chimpanzees, three males and four females. The dominant male of the troop is named Tombe.

An Australia-themed walk-through enclosure that houses a group of Bennet's wallabies.

The Lakes holds a small collection of waterbirds such as Chilean flamingo and formerly Dalmatian pelican along with many red-eared terrapins that live freely in the lakes.

The Medellin Monkeys enclosure is home to one of the main groups of Colombian black spider monkeys.

Heart of the Amazon

This complex is home to a large troop of common squirrel monkeys, but also features silver dollar, angelfish, green iguana, and a pair of red-backed bearded saki. The enclosures just outside Heart of the Amazon were previously home to both black and brown bears but currently house one of the zoo's Geoffroy's cats and the troop of yellow-breasted capuchins.

Outdoor area including horses, goats, llamas, alpacas, Kune Kune pigs, chickens and wallabies. There is a walk through with the goats where you can feed them and the Wallaby Walkabout through the wallaby enclosure.

This group of enclosures houses the zoos' second large group of Colombian black spider monkeys and a second group of Humboldt penguins along with an aviary home to scarlet ibises.

Call of the Wild

This exhibit is near the Wilds of Asia complex and as of December 2013 features three timber wolves. They can be viewed from the Lost Madagascar Express train, and also from the glass viewing areas.

In July 2016 the zoo opened a new augmented reality display that gives its visitors the chance to walk with digitally-recreated mammoths. The attraction is located inside the elephant house and is believed to be the first of its kind in a UK zoo. 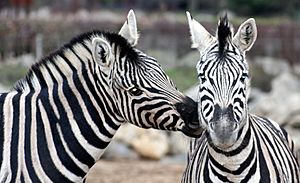 The zoo has its own charity Action for the Wild to assist projects worldwide. It provides both financial and technical assistance, and aims to raise awareness among local people in community conservation programmes, as well as supporting conservation research around the world.

Since 2005, Action for the Wild has been working to set up the 6,000 hectare UmPhafa Private Nature Reserve in KwaZulu Natal, South Africa. Working to rehabilitate the land which was previously managed as separate cattle farms, to return it to a healthy state and to release native animal species back onto the reserve. Many species have been released; these species include zebra, nyala, giraffe, red hartebeest, blesbok, waterbuck, common reedbuck, blue wildebeest and ostrich.

This exhibit used to house Sasha, the zoo's well-known and loved white tiger. Sasha died on 15 December 2010 aged 15. The exhibit underwent extensive work, and re-opened as Lost Madagascar at Easter 2012.

Hornbill Hill was a steep and narrow pathway that featured enclosures for Waldrapp ibis, southern ground hornbill, black hornbill, red-billed blue magpie and at the top of the hill there is an enclosure that has previously held snow leopard, fossa, giant anteater and various New World monkeys and an African aviary that normally holds purple gallinule, hamerkop, Von der Decken's hornbill and curlew. There is also a small hidden enclosure for Geoffroy's cat. The Hornbill Hill aviaries, Geoffroy's cat enclosure and part of the Medellin Monkeys exhibit have all been demolished to make way for the new sun bear enclosure.

The zoo is currently devising plans to build a brand new tropical walk-through exhibit which will bring over seven new species to Colchester Zoo, including a brand new species of crocodile. The exhibit will be spread over two floors and will incorporate an underwater viewing tunnel in which visitors will be able to see crocodiles swim and feed above their heads, before coming out to see them basking around their outdoor pool on their heated rocks through three large glass windows.

The zoo is currently renovating an enclosure for its pride of lions. The next project will be to refurbish the hippo enclosure.

All content from Kiddle encyclopedia articles (including the article images and facts) can be freely used under Attribution-ShareAlike license, unless stated otherwise. Cite this article:
Colchester Zoo Facts for Kids. Kiddle Encyclopedia.