Geoffroy's cat (Leopardus geoffroyi) is a wild cat native to southern and central South America. It is about the size of a domestic cat. The species is relatively common in many areas, but is considered to be "near threatened" by IUCN.

The cat was examined and described by the early 19th century French anatomist Étienne Geoffroy Saint-Hilaire. He collected it on an expedition to South America. 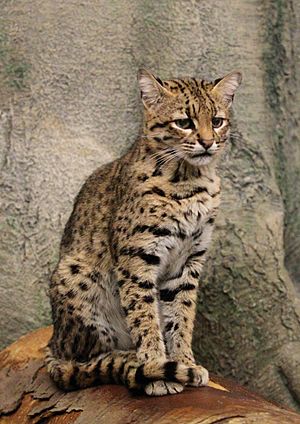 Geoffroy's cat at the Cincinnati Zoo

The Geoffroy's cat is about the size of a domestic cat, but has numerous black spots and dark bands on the cheeks, head and neck as well as on the tail and limbs. The background colour of its fur varies from a brownish-yellow coat in the northern part of its range to a more grayish coat in the south. The underbelly hair is cream-coloured or even white. The backs of the ears are black with white spots. Black individuals are common. 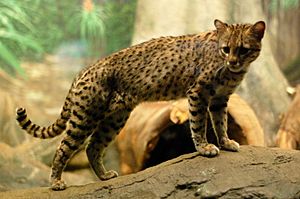 The Geoffroy's cat inhabits the Andes, Pampas (scrubby forest parts), and Gran Chaco landscape from southern Bolivia to the Straits of Magellan at elevations ranging from sea level up to 3,300 m (10,800 ft). It prefers open woodland or scrubland with plenty of cover. It also occurs in grasslands and marshy areas.

Although it appears to be plentiful in central regions, including Bolivia, where it is the second most common cat after the ocelot, it is considered to be endangered in regions such as southern Chile. The IUCN previously listed the species as "Near Threatened" because of the concern over habitat conversion in many countries in its range.

The Geoffroy's cat is nocturnal and a solitary hunter that contacts conspecifics only during the mating season. Geoffroy's cats have been observed to stand up on their hind legs to scan the surrounding landscape and use their tail as a support, an unusual behaviour among cats. It is able to climb trees but rarely does, except to leave faeces to scent mark its territory.

It is at the top of the food chain in its range and preys primarily on rodents, hares, small lizards, insects, and occasionally frogs and fish. Females maintain home ranges about 2 to 6 km2 (0.77 to 2.32 sq mi) in size, while males range over up to 12 km2 (4.6 sq mi). 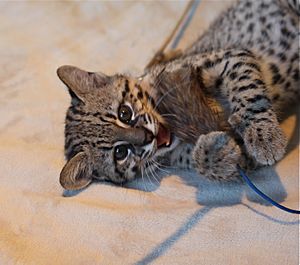 The breeding season for Geoffroy's cats lasts from October to March. During this time, the female comes into estrus for periods of up to twelve days, between three and five weeks apart. Mating during this time is brief and frequent, often taking place on a high ledge or similar site.

Gestation lasts for 72–78 days. Most births occur between December and May. Litters consist of one to three kittens, and one or two is more common.

The kittens are born blind and helpless, weighing about 65 to 95 grams (2.3 to 3.4 oz), and develop rather more slowly than in the domestic cat. The eyes open after from eight to nineteen days, and they begin to eat solid food at six or seven weeks. Kittens become independent of their mother at around eight months, but are generally not sexually mature until 18 months for females and 24 months for males.

All content from Kiddle encyclopedia articles (including the article images and facts) can be freely used under Attribution-ShareAlike license, unless stated otherwise. Cite this article:
Geoffroy's cat Facts for Kids. Kiddle Encyclopedia.