The red-eared slider (Trachemys scripta elegans) is a semi-aquatic turtle. It belongs to the family Emydidae. It is the most popular pet turtle in the United States. It lives in Southern United States. It is also found in many other places as an invasive species. They can be found in the US state of California where it was introduced. 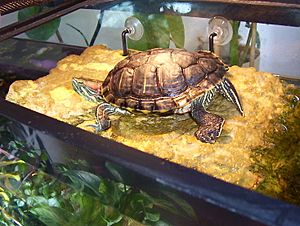 Red-eared slider basking on a floating platform under a sunlamp 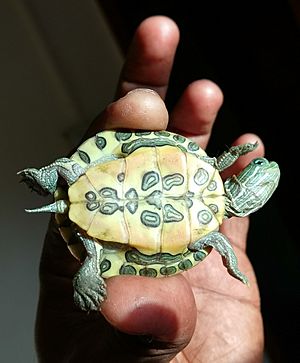 The carapace of this species can reach more than 40 cm (16 in) in length, but the average length ranges from 15 to 20 cm (6 to 8 in). The females of the species are usually larger than the males. They typically live between 20 and 30 years, although some individuals have lived for more than 40 years. Their life expectancy is shorter when they are kept in captivity. The quality of their living environment has a strong influence on their lifespans and well being. 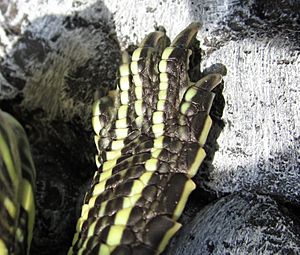 The shell is divided into two sections: the upper or dorsal carapace, and the lower, ventral carapace or plastron. The upper carapace consists of the vertebral scutes, which form the central, elevated portion; pleural scutes that are located around the vertebral scutes; and then the marginal scutes around the edge of the carapace. The rear marginal scutes are notched. The scutes are bony keratinous elements. The carapace is oval and flattened (especially in the male) and has a weak keel that is more pronounced in the young. The color of the carapace changes depending on the age of the turtle. The carapace usually has a dark green background with light and dark, highly variable markings. In young or recently hatched turtles, it is leaf green and gets slightly darker as a turtle gets older, until it is a very dark green, and then turns a shade between brown and olive green. The plastron is always a light yellow with dark, paired, irregular markings in the centre of most scutes. The plastron is highly variable in pattern. The head, legs, and tail are green with fine, irregular, yellow lines. The whole shell is covered in these stripes and markings that aid in camouflaging an individual. 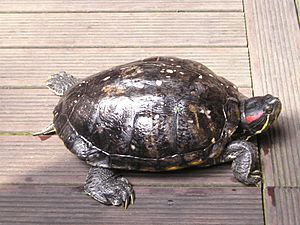 The turtle can retract its head and extremities inside its shell if it feels threatened.

Turtles also have a complete skeletal system, with partially webbed feet that help them to swim and that can be withdrawn inside the carapace along with the head and tail. The red stripe on each side of the head distinguishes the red-eared slider from all other North American species and gives this species its name, as the stripe is located behind the eyes where their (external) ears would be. These stripes may lose their color over time. Some individuals can also have a small mark of the same color on the top of their heads. The red-eared slider does not have a visible outer ear or an external auditory canal; instead, it relies on a middle ear entirely covered by a cartilaginous tympanic disc.

Red-eared sliders do not hibernate, but actually brumate; while they become less active, they do occasionally rise to the surface for food or air. Brumation can occur to varying degrees. In the wild, red-eared sliders brumate over the winter at the bottoms of ponds or shallow lakes. They generally become inactive in October, when temperatures fall below 10 °C (50 °F). During this time, the turtles enter a state of sopor, during which they do not eat or defecate, they remain nearly motionless, and the frequency of their breathing falls. Individuals usually brumate underwater, but they have also been found under banks and rocks, and in hollow stumps. In warmer winter climates, they can become active and come to the surface for basking. When the temperature begins to drop again, however, they quickly return to a brumation state. Sliders generally come up for food in early March to as late as the end of April.

During brumation, T. s. elegans can survive anaerobically for weeks, producing ATP from glycolysis. The turtle's metabolic rate drops dramatically, with heart rate and cardiac output dropping by 80% to minimise energy requirements. The lactic acid produced is buffered by minerals in the shell, preventing acidosis. Red-eared sliders kept captive indoors should not brumate. 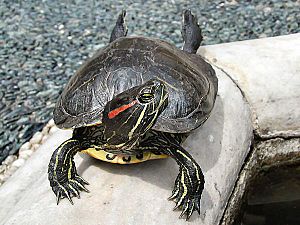 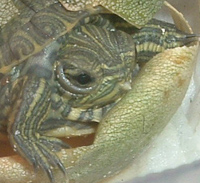 Hatching turtle with its egg tooth 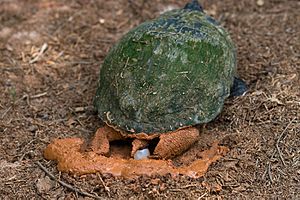 Courtship and mating activities for red-eared sliders usually occur between March and July, and take place under water. During courtship, the male swims around the female and flutters or vibrates the back side of his long claws on and around her face and head, possibly to direct pheromones towards her. The female swims toward the male and, if she is receptive, sinks to the bottom for mating. If the female is not receptive, she may become aggressive towards the male. Courtship can last 45 minutes, but mating takes only 10 minutes. 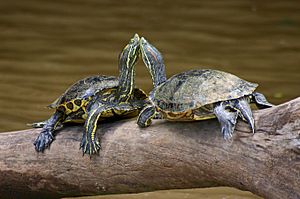 A pair of red-eared sliders.

On occasion, a male may appear to be courting another male, and when kept in captivity may also show this behaviour towards other household pets. Between male turtles, it could be a sign of dominance and may preclude a fight. Young turtles may carry out the courtship dance before they reach sexual maturity at five years of age, but they are unable to mate.

After mating, the female spends extra time basking to keep her eggs warm. She may also have a change of diet, eating only certain foods, or not eating as much as she normally would. A female can lay between two and 30 eggs depending on body size and other factors. One female can lay up to five clutches in the same year, and clutches are usually spaced 12 to 36 days apart. The time between mating and egg-laying can be days or weeks. The actual egg fertilization takes place during the egg-laying. This process also permits the laying of fertile eggs the following season, as the sperm can remain viable and available in the female's body in the absence of mating. During the last weeks of gestation, the female spends less time in the water and smells and scratches at the ground, indicating she is searching for a suitable place to lay her eggs. The female excavates a hole, using her hind legs, and lays her eggs in it.

Incubation takes 59 to 112 days. Late-season hatchlings may spend the winter in the nest and emerge when the weather warms in the spring. Just prior to hatching, the egg contains 50% turtle and 50% egg sac. A new hatchling breaks open its egg with its egg tooth, which falls out about an hour after hatching. This egg tooth never grows back. Hatchlings may stay inside their eggshells after hatching for the first day or two. If they are forced to leave the eggshell before they are ready, they will return if possible. When a hatchling decides to leave the shell, it still has a small sac protruding from its plastron. The yolk sac is vital and provides nourishment while visible, and several days later it will have been absorbed into the turtle's belly. The sac must be absorbed, and does not fall off. The split must heal on its own before the turtle is able to swim. The time between the egg hatching and water entry is 21 days.

Damage to or inordinate motion of the protruding egg yolk, enough to allow air into the turtle's body, results in death. This is the main reason for marking the top of turtle eggs if their relocation is required for any reason. An egg turned upside down will eventually terminate the embryo's growth by the sac smothering the embryo. If it manages to reach term, the turtle will try to flip over with the yolk sac, which would allow air into the body cavity and cause death. The other fatal danger is water getting into the body cavity before the sac is absorbed completely and while the opening has not completely healed yet. 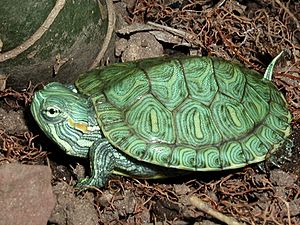 Red-eared slider turtles are the world’s most commonly traded reptile, due to their relatively low price, and usually low food price, small size and easy maintenance. As with other turtles, tortoises, and box turtles, individuals that survive their first year or two can be expected to live generally around 30 years. They present an infection risk; particularly to salmonella. This risk can be mitigated and minimized by changing the aquarium water at least once per two weeks for teenagers and once per week for babies or use a proper Aquarium water filter system. To protect oneself from infection wash hands whenever handling a red-eared slider or the water they dwell in. When they mature they can inflict painful bites, leading irresponsible owners to release them into the wild with negative ecological, social and, economic impacts.

All content from Kiddle encyclopedia articles (including the article images and facts) can be freely used under Attribution-ShareAlike license, unless stated otherwise. Cite this article:
Red-eared slider Facts for Kids. Kiddle Encyclopedia.