The lion-tailed macaque (Macaca silenus) is an Old World monkey. It lives in the Western Ghats mountains of India.

The hair of the Lion-tailed macaque is dark-brown or black. There is a black tuft at the end of the tail, similar to a lion's tail. With a head-to-tail length of 45 to 60 cm and a weight of 3 to 10 kg, it is one of the smaller macaques.

It is a diurnal animal, active during the day. It lives in the rainforest dweller. It is a good climber and spends most of its life in the upper branches. Unlike other macaques, it avoids humans.

The lion-tailed macaque is one if the rarest primates. Many zoos take part in breeding programs to help this species survive. 368 of these Macaque are reported to live in zoos. 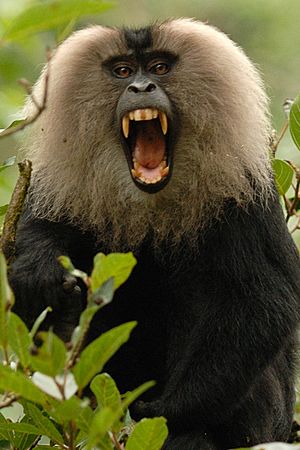 A male showing his canines

The hair of the lion-tailed macaque is black. Its outstanding characteristic is the silver-white mane which surrounds the head from the cheeks down to its chin, which gives this monkey its German name Bartaffe - "beard ape". The hairless face is black in colour. With a head-body length of 42 to 61 cm and a weight of 2 to 10 kg, it ranks among the smaller macaques. The tail is medium in length at about 25 cm, and has a black tuft at the end that is similar to a lion's tail, although this tuft is more pronounced in males than in females.

Gestation is approximately six months. The young are nursed for one year. Sexual maturity is reached at four years for females, and six years for males. The life expectancy in the wild is approximately 20 years, while in captivity is up to 30 years.

The lion-tailed macaque is a diurnal rainforest dweller. It is a good climber and spends a majority of its life in the upper canopy of tropical moist evergreen forests. Unlike other macaques, it avoids humans. In group behavior, it is much like other macaques; it lives in hierarchical groups of usually 10 to 20 animals, which consist of few males and many females. It is a territorial animal, defending its area first with loud cries towards the invading troops. If this proves to be fruitless, it brawls aggressively.

Lion-tailed macaque behaviour is characterized by typical patterns such as arboreal living, selectively feeding on a large variety of fruit trees, large interindividual spaces while foraging, and time budgets with high proportion of time devoted to exploration and feeding. It primarily eats indigenous fruits, leaves, buds, insects and small vertebrates in virgin forest, but can adapt to rapid environmental change in areas of massive selective logging through behavioural modifications and broadening of food choices to include fruits, seeds, shoots, pith, flowers, cones, mesocarp, and other parts of many nonindigenous and pioneer plants. In the forests of Kerala they were observed preying on nestling and eggs of pigeons.

All content from Kiddle encyclopedia articles (including the article images and facts) can be freely used under Attribution-ShareAlike license, unless stated otherwise. Cite this article:
Lion-tailed macaque Facts for Kids. Kiddle Encyclopedia.