Lories and lorikeets facts for kids

Lories and lorikeets (tribe Loriini) are small to medium-sized arboreal parrots. They have special brush-tipped tongues to feed on nectar of blossoms and soft fruits, preferably berries.

They are a monophyletic group in the parrot family Psittacidae. Sequence analysis and morphology show that the group is in the middle of other groups.

They are widely distributed throughout the Australasian region, including south-eastern Asia, Polynesia, Papua New Guinea, Timor Leste and Australia, and the majority have very brightly coloured plumage.

Those studies show that the lories and lorikeets form a single group, closely related to the budgerigar and the fig parrots. 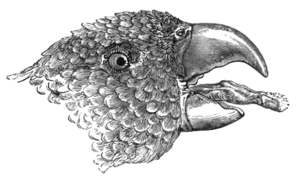 Tongue of a lory

Lories and lorikeets have specialized brush-tipped tongues for feeding on nectar and soft fruits. They can feed from the flowers of about 5,000 species of plants and use their specialized tongues to take the nectar. The tip of their tongues have tufts of papillae (extremely fine hairs), which collect nectar and pollen.

The multi-coloured rainbow lorikeet was one of the species of parrots appearing in the first edition of The Parrots of the World and also in John Gould's lithographs of the Birds of Australia. Then and now, lories and lorikeets are described as some of the most beautiful species of parrot.

In the wild, rainbow lorikeets feed mainly on pollen and nectar, and possess a tongue adapted especially for their particular diet. Many fruit orchard owners consider them a pest, as they often fly in groups and strip trees containing fresh fruit. They are also frequent visitors at bird feeders that supply lorikeet-friendly treats, such as store-bought nectar, sunflower seeds, and fruits such as apples, grapes and pears. Occasionally they have been observed feeding on meat. 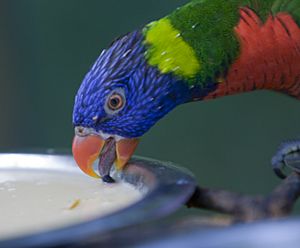 The ultramarine lorikeet is endangered. It is now one of the 50 rarest birds in the world. The blue lorikeet is classified as vulnerable. The introduction of European rats to the small island habitats of these birds is a major cause of their endangerment. Various conservation efforts have been made to relocate some of these birds to locations free of predation and habitat destruction.

A "Lory" famously appears in Chapter III of Lewis Carroll's Alice's Adventures in Wonderland. Alice argues with the Lory about its age.

All content from Kiddle encyclopedia articles (including the article images and facts) can be freely used under Attribution-ShareAlike license, unless stated otherwise. Cite this article:
Lories and lorikeets Facts for Kids. Kiddle Encyclopedia.