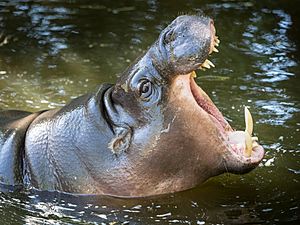 Showing its teeth at the Lagos Zoo in Portugal

The pygmy hippopotamus (Choeropsis liberiensis or Hexaprotodon liberiensis) is a small hippopotamid which is native to the forests and swamps of West Africa, primarily in Liberia, with small populations in Sierra Leone, Guinea, and Ivory Coast.

The pygmy hippo is reclusive and nocturnal. It is one of only two extant species in the family Hippopotamidae, the other being its much larger relative, the common hippopotamus (Hippopotamus amphibius) or Nile hippopotamus. The pygmy hippopotamus displays many terrestrial adaptations, but like the hippo, it is semiaquatic and relies on water to keep its skin moist and its body temperature cool. Behaviors such as mating and giving birth may occur in water or on land. The pygmy hippo is herbivorous, feeding on ferns, broad-leaved plants, grasses, and fruits it finds in the forests.

A rare nocturnal forest creature, the pygmy hippopotamus is a difficult animal to study in the wild. Pygmy hippos were unknown outside West Africa until the 19th century. Introduced to zoos in the early 20th century, they breed well in captivity and the vast majority of research is derived from zoo specimens. The survival of the species in captivity is more assured than in the wild; the World Conservation Union estimates that fewer than 3,000 pygmy hippos remain in the wild.

Pygmy hippos are primarily threatened by loss of habitat, as forests are logged and converted to farm land, and are also vulnerable to poaching, hunting for bushmeat, natural predators, and war. Pygmy hippos are among the species illegally hunted for food in Liberia. 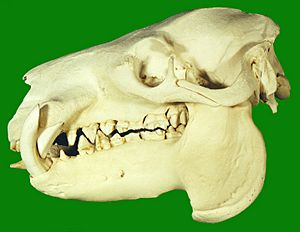 The taxonomy of the genus of the pygmy hippopotamus has changed as understanding of the animal has developed. Samuel G. Morton initially classified the animal as Hippopotamus minor, but later determined it was distinct enough to warrant its own genus, and labeled it Choeropsis. In 1977, Shirley C. Coryndon proposed that the pygmy hippopotamus was closely related to Hexaprotodon, a genus that consisted of prehistoric hippos mostly native to Asia.

The Nigerian pygmy hippopotamus ranged in the Niger River Delta, especially near Port Harcourt, but no reliable reports exist after the collection of the museum specimens secured by I. R. P. Heslop, a British colonial officer, in the early 1940s. It is probably extinct. The subspecies is separated by over 1,800 km (1,100 mi) and the Dahomey Gap, a region of savanna that divides the forest regions of West Africa. The subspecies is named after I. R. P. Heslop, who claimed in 1945 to have shot a pygmy hippo in the Niger Delta region and collected several skulls. He estimated that perhaps no more than 30 pygmy hippos remained in the region.

Heslop reportedly sent four pygmy hippopotamus skulls he collected to the British Museum of Natural History in London. These specimens were not subjected to taxonomic evaluation, however, until 1969 when G. B. Corbet classified the skulls as belonging to a separate subspecies based on consistent variations in the proportions of the skulls. The Nigerian pygmy hippos were seen or shot in Rivers State, Imo State and Bayelsa State, Nigeria. While some local populations are aware that the species once existed, its history in the region is poorly documented.

The evolution of the pygmy hippopotamus is most often studied in the context of its larger cousin. Both species were long believed to be most closely related to the family Suidae (pigs and hogs) or Tayassuidae (peccaries), but research within the last 10 years has determined that pygmy hippos and hippos are most closely related to cetaceans (whales and dolphins). Hippos and whales shared a common semi-aquatic ancestor that branched off from other artiodactyls around 60 mya.

This hypothesized ancestor likely split into two branches about six million years later. One branch would evolve into cetaceans, the other branch became the anthracotheres, a large family of four-legged beasts, whose earliest member, from the Late Eocene, would have resembled narrow hippopotami with comparatively small and thin heads.

Hippopotamids are deeply nested within the family Anthracotheriidae. The oldest known hippopotamid is the genus Kenyapotamus, which lived in Africa from 16 to 8 mya. Kenyapotamus is known only through fragmentary fossils, but was similar in size to C. liberiensis. The Hippopotamidae are believed to have evolved in Africa, and while at one point the species spread across Asia and Europe, no hippopotami have ever been discovered in the Americas. Starting 7.5 to 1.8 mya the Archaeopotamus, likely ancestors to the genus Hippopotamus and Hexaprotodon, lived in Africa and the Middle East. 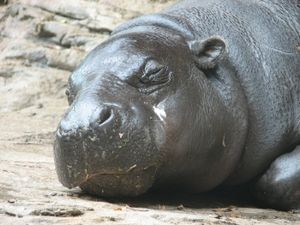 Resting at Louisville Zoo. The skull of a pygmy hippo has less pronounced orbits and nostrils than a common hippopotamus.

Pygmy hippos share the same general form as a hippopotamus. They have a graviportal skeleton, with four stubby legs and four toes on each foot, supporting a portly frame. The pygmy hippo, however, is only half as tall as the hippopotamus and weighs less than 1/4 as much as its larger cousin. Adult pygmy hippos stand about 75–100 cm (2.46–3.28 ft) high at the shoulder, are 150–175 cm (4.92–5.74 ft) in length and weigh 180–275 kg (397–606 lb). Their lifespan in captivity ranges from 30 to 55 years, though it is unlikely that they live this long in the wild.

The skin is greenish-black or brown, shading to a creamy gray on the lower body. Their skin is very similar to the common hippo's, with a thin epidermis over a dermis that is several centimeters thick. Pygmy hippos have the same unusual secretion as common hippos, that gives a pinkish tinge to their bodies, and is sometimes described as "blood sweat" though the secretion is neither sweat nor blood. This substance, hipposudoric acid, is believed to have antiseptic and sunscreening properties. The skin of hippos dries out quickly and cracks, which is why both species spend so much time in water.

The skeleton of C. liberiensis is more gracile than that of the common hippopotamus, meaning their bones are proportionally thinner. The common hippo's spine is parallel with the ground; the pygmy hippo's back slopes forward, a likely adaptation to pass more easily through dense forest vegetation. Proportionally, the pygmy hippo's legs and neck are longer and its head smaller. 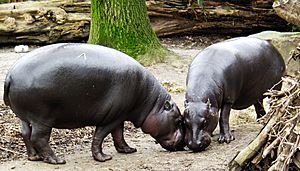 Nuzzling couple at the Duisburg Zoo in Germany

Despite adaptations to a more terrestrial life than the common hippopotamus, pygmy hippos are still more aquatic than all other even-toed ungulates. The ears and nostrils of pygmy hippos have strong muscular valves to aid submerging underwater, and the skin physiology is dependent on the availability of water. 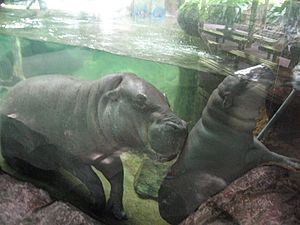 The behavior of the pygmy hippo differs from the common hippo in many ways. Much of its behavior is more similar to that of a tapir, though this is an effect of convergent evolution. While the common hippopotamus is gregarious, pygmy hippos live either alone or in small groups, typically a mated pair or a mother and calf. Pygmy hippos tend to ignore each other rather than fight when they meet. Field studies have estimated that male pygmy hippos range over 1.85 km2 (460 acres), while the range of a female is 0.4 to 0.6 km2 (99–148 acres).

Pygmy hippos spend most of the day hidden in rivers. They will rest in the same spot for several days in a row, before moving to a new spot. At least some pygmy hippos make use of dens or burrows that form in river banks. It is unknown if the pygmy hippos help create these dens, or how common it is to use them. Though a pygmy hippo has never been observed burrowing, other artiodactyls, such as warthogs, are burrowers.

Like the common hippopotamus, the pygmy hippo emerges from the water at dusk to feed. It relies on game trails to travel through dense forest vegetation. It marks trails by vigorously waving its tail while defecating to further spread its feces. The pygmy hippo spends about six hours a day foraging for food. 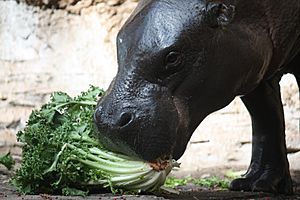 Pygmy hippos are herbivorous. They do not eat aquatic vegetation to a significant extent and rarely eat grass because it is uncommon in the thick forests they inhabit. The bulk of a pygmy hippo's diet consists of ferns, broad-leaved plants and fruits that have fallen to the forest floor. The wide variety of plants pygmy hippos have been observed eating suggests that they will eat any plants available. This diet is of higher quality than that of the common hippopotamus. 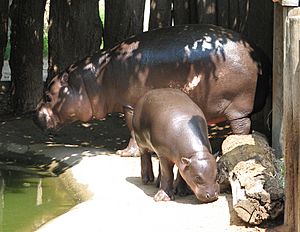 Baby stands near its parent at a zoo in Jihlava, Czech Republic

The gestation period ranges from 190–210 days, and usually a single young is born, though twins are known to occur.

The common hippopotamus gives birth and mates only in the water, but pygmy hippos mate and give birth on both land and water.

Young pygmy hippos can swim almost immediately. At birth, pygmy hippos weigh 4.5–6.2 kg (9.9–13.7 lb) with males weighing about 0.25 kg (0.55 lb) more than females. Pygmy hippos are fully weaned between six and eight months of age; before weaning they do not accompany their mother when she leaves the water to forage, but instead hide in the water by themselves. The mother returns to the hiding spot about three times a day and calls out for the calf to suckle. Suckling occurs with the mother lying on her side. 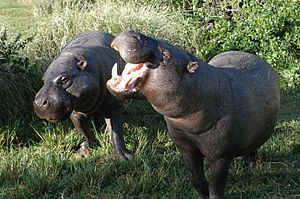 The greatest threat to the remaining pygmy hippopotamus population in the wild is loss of habitat. The forests in which pygmy hippos live have been subject to logging, settling and conversion to agriculture, with little efforts made to make logging sustainable. As forests shrink, the populations become more fragmented, leading to less genetic diversity in the potential mating pool.

Pygmy hippos are among the species illegally hunted for food in Liberia. Their meat is said to be of excellent quality, like that of a wild boar; unlike those of the common hippo, the pygmy hippo's teeth have no value. The effects of West Africa's civil strife on the pygmy hippopotamus are unknown, but unlikely to be positive. The pygmy hippopotamus can be killed by leopards, pythons and crocodiles. How often this occurs is unknown.

Basel Zoo in Switzerland holds the international studbook and coordinates the entire captive pygmy hippo population that freely breeds in zoos around the world. Between 1970 and 1991 the population of pygmy hippos born in captivity more than doubled. The survival of the species in zoos is more certain than the survival of the species in the wild. In captivity, the pygmy hippo lives from 42 to 55 years, longer than in the wild. Since 1919, only 41 percent of pygmy hippos born in zoos have been male.

All content from Kiddle encyclopedia articles (including the article images and facts) can be freely used under Attribution-ShareAlike license, unless stated otherwise. Cite this article:
Pygmy hippopotamus Facts for Kids. Kiddle Encyclopedia.