The Louisville Zoo, or the Louisville Zoological Garden, is a 134-acre (54 ha) zoo in Louisville, Kentucky, situated in the city's Poplar Level neighborhood. Founded in 1969, the "State Zoo of Kentucky" currently exhibits over 1,700 animals in naturalistic and mixed animal settings representing both geographical areas and biomes or habitats.

The Louisville Zoo is accredited by the Association of Zoos and Aquariums and the American Alliance of Museums. During the 2006–07 season, the zoo set an all-time yearly attendance record with 810,546 visitors.

The Louisville Zoo's mission is "To better the bond between the people and our planet".

The Louisville Zoo opened on May 1, 1969, with 250 animals on exhibit. The zoo was built on land acquired by the City of Louisville in the 1960s from the estate of Ben Collins. Much of the initial funding was donated by local philanthropist James Graham Brown.

Opening Day in 1969 mostly had exhibits with four-legged animals such as elephants and giraffes. The zoo also offered a train to take zoo visitors past several exhibits; the attraction operates to this day. Opening Day had some criticism from the general public as a lack of shade was evident throughout the zoo. Over time, tree growth has reduced the problem.

In 1997, a fully restored Philadelphia Toboggan Company (PTC #49) carousel was added as an attraction. In May 2007, Glacier Run Splash Park, a children's water playground with 42 water-spray features, opened at the zoo. The splash park was the first phase of the Glacier Run area to open, which features polar bears exhibts modeled after the town of Churchill, Manitoba, Canada.

Inside the circular Gorilla Sanctuary, visitors are separated only by glass and can get nose-to-nose with the gorillas. Several different outdoor vantage points are available from which to see the gorillas playing and relaxing.

The HerpAquarium features 100 species of reptiles, amphibians, and fish from around the world.

A notable resident of the HerpAquarium is a 6-foot-long (1.8 m) rare albino American alligator named King Louie. He is named after King Louis XVI of France, after whom the city of Louisville is also named.

The Louisville Zoo currently houses a group of critically endangered Panamanian golden frogs. The zoo is working to preserve this species of frog from extinction. Their numbers have declined in the wild partly due to the chytrid fungus and habitat destruction.

On March 31, 2006, the zoo added a bachelor group of seven vampire bats obtained from the Philadelphia Zoo, and another 10 males from the Sedgwick County Zoo were added to the group in late May 2006. Eventually, the exhibit will house around 40 bats. The exhibit is designed to look like an old mine shaft. 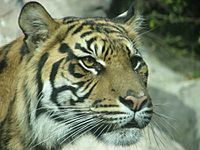 The zoo has a distinctive zoological exhibit called "Islands", which is the first exhibit in the world that uses a system of rotating a variety of animals into one exhibit. This way, the animals can explore different habitats throughout the day, as they would in the wild. This helps to give the animals needed stimulation and heightens their awareness. Moreover, the exhibit is the first to have natural predator and prey in the same space. It has three outdoor exhibit areas and one indoor area. All animals in this exhibit are endangered or threatened species. The animals on display here change from day to day so that visitors can have a new and different experience with each visit to the zoo. The animals that can be seen in this exhibit include the Sumatran tiger, orangutan, siamang, babirusa, and Malayan tapir.

The zoo is home to four orangutans, two males named Teak and Segundo (aka Gunny) and two females named Amber and Bella. Amber and Teak are half-siblings sharing the same father and are hybrid orangutans, while Gunny and Bella are purebred Sumatran orangutans and are under breeding recommendation, though there has yet to be any successful breeding between them.

The Islands Pavilion is an indoor area that houses many species of birds, including the white-throated ground-dove. The zoo was the first zoo in the world to hatch this rare dove in captivity. The first hatchling was born on October 17, 2006, and a second followed on December 1, 2006. Some of the other bird species included in the Islands Pavilion are the Mariana fruit dove, Madagascar fody, and the rockhopper penguin. The pavilion also houses the Rodrigues fruit bat, Cuban crocodile, and Komodo dragon. 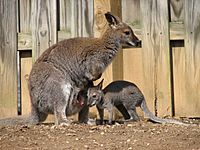 The new Wallaroo Walkabout that opened in 2007 lets guests walk directly through the exhibit, which is home to the wallaroo and red-necked wallaby, as well as some Australian birds including the kookaburra, blue-faced honeyeater, emu, and tawny frogmouth. Visitors are able to interact with the wallaroos and wallabies if they stay on the walkway.

Lorikeet Landing is an Australian exhibit that is a walkthrough aviary filled with several brightly colored birds known as lorikeets. Visitors can feed nectar to the birds right out of their hands. The lorikeet species at the Louisville Zoo are the black-winged lory, green-naped lorikeet, perfect lorikeet, red lory, and Swainson's lorikeet.

Finished in early 2011, this 4.3-acre (1.7 ha) outdoor exhibit is based on the theme of an old gold-mining town bordered by a glacier. It features polar bears, grizzly bears, seals, and sea lions, as well as a splash park for children. The splash park opened in 2007, and was the first part of this $25 million exhibit to open.

The exhibit also includes classrooms, party rooms available for rental, viewing areas above and below water, and a 200-seat outdoor auditorium for watching animal training demonstrations.

The zoo also includes a Zoo Key System. At the front of the park, a key, usually in the shape of an animal, may be purchased. Around the park, visitors can insert these keys into Zoo Key boxes for a song and/or information about the animal.

The zoo has a booth called "Handimals" located by the entrance where kids can make an animal out of their hand prints.

Often when an animal is born in the zoo, the zoo holds a contest where participants send in ideas for names.

All content from Kiddle encyclopedia articles (including the article images and facts) can be freely used under Attribution-ShareAlike license, unless stated otherwise. Cite this article:
Louisville Zoo Facts for Kids. Kiddle Encyclopedia.