The Alaska Zoo is a zoo in Anchorage, Alaska, located on 25 acres (10 ha) of the Anchorage Hillside. It is a popular attraction in Alaska, with nearly 200,000 visitors per year.

The zoo is currently home to more than 100 birds and mammals representing some 50 species. The zoo has the widest variety of animals native to the state of Alaska as well as some exotics such as Amur tigers, Bactrian camels, and yaks.

In addition to viewing, the zoo specializes in education, research, wildlife conservation, and animal rehabilitation; many of the animals currently in the zoo were found orphaned or injured. 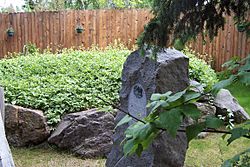 In 1966, Anchorage grocer Jack Snyder won a contest offering a prize of "$3,000 or a baby elephant". He chose the elephant, a female Asian elephant named Annabelle. Annabelle was initially kept at the Diamond H Horse Ranch, located in the Hillside area of Anchorage and owned by Sammye Seawell, which had the only heated stalls available.

With Annabelle's increasing popularity, Seawell formed a non-profit corporation to build a place "where the public could visit animals and learn about them." It was incorporated on March 28, 1968, as the Alaska Children's Zoo, which opened in 1969 with Annabelle and other donated animals. The zoo was located on land adjacent to Seawell's ranch. The zoo's name was changed to Alaska Zoo in June 1980.

In 1983, a female African elephant named Maggie arrived at the Alaska Zoo as a companion for Annabelle.

The zoo attracted some attention, even outside Alaska, in 1994 when Binky, then one of the zoo's polar bears, injured several visitors who entered his enclosure, famously pacing with an Australian woman's shoe dangling from his mouth (the current polar bear exhibit is human-proof).

In 1997, Annabelle died, leaving her companion, Maggie alone. In 2004, in spite of mounting criticism, Alaska Zoo officials decided to keep Maggie in Alaska for at least three more years, rather than sending her to an elephant sanctuary in a warmer climate, where she could also socialize with other elephants. As of June 6, 2007, she was moved to the PAWS sanctuary in California.

Annabelle, an Asian elephant, was born in India in 1964. In 1966, in a Chiffon Tissue contest sponsored by Crown Zellerbach, she was offered as an alternative prize between "$3,000 or a baby elephant". The prize-winner, Anchorage grocer Jack Snyder, chose the elephant. Annabelle was initially kept at the Diamond H Horse Ranch, located in the Hillside area of Anchorage and owned by Sammye Seawell, which had the only heated stalls available. Annabelle was one of the first animals when the zoo was founded as the Alaska Children's Zoo in 1969, along with several orphaned and injured animals in need of homes, including a black bear, seal, Arctic fox, and petting zoo goats.

Annabelle died of complications of a foot infection on December 15, 1997.

Maggie, an African elephant, came to the Alaska Zoo in 1983 as a companion for Annabelle. Maggie originated in Zimbabwe, Africa, where her herd had been culled – selectively destroyed to reduce numbers – leaving her in need of a home. Maggie is also known as having the first elephant treadmill in the world.

In 2007, Maggie was moved to the PAWS sanctuary in California.

The Alaska Zoo is proactive in its conservation efforts and research, as well as education programs. The zoo is a part of the Species Survival Program for tigers and snow leopards, and the Polar Bear International helping with the conservation of polar bears. Also, the zoo is involved in animal husbandry and research on a variety of scales in part with the University of Alaska Anchorage.

All content from Kiddle encyclopedia articles (including the article images and facts) can be freely used under Attribution-ShareAlike license, unless stated otherwise. Cite this article:
Alaska Zoo Facts for Kids. Kiddle Encyclopedia.