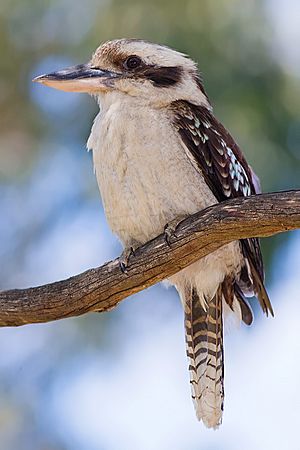 The laughing kookaburra (Dacelo novaeguineae) is a type of kingfisher. They were previously called the laughing jackass and the giant kingfisher.

It is thought that laughing kookaburras only have one mate for their whole life.

They are normally off white with pale brown lines. They have brown wings and back. They look similar to the Blue-winged kookaburra which is found in the same area. male and female birds look similar. They are 43 to 45 cm long and weigh around 0.5 kg.

They are originally from eastern Australia. Humans have put them into south-west Australia, Tasmania and New Island. They live nearly everywhere in this area where there are suitable trees.

They eat insects, crustaceans and worms. Sometimes, they will eat small snakes, mammals, frogs and birds.

They can become tame and may accept meat from a human's hand.

All content from Kiddle encyclopedia articles (including the article images and facts) can be freely used under Attribution-ShareAlike license, unless stated otherwise. Cite this article:
Laughing kookaburra Facts for Kids. Kiddle Encyclopedia.