The lizard commonly known as green iguana or common iguana (Iguana iguana) is native to Central and South America and the Caribbean. It is an arboreal herbivorous species that belongs to the genus Iguana.

The green iguana ranges over a large geographic area, from southern Brazil and Paraguay as far north as Mexico. Also the Caribbean islands, especially Puerto Rico, where they are very common throughout the island; and in the United States in South Florida (including the Florida Keys), Hawaii, and the Rio Grande Valley of Texas. 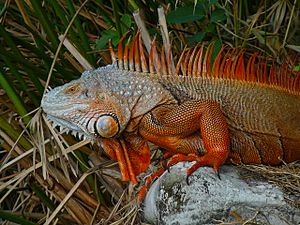 When frightened by a predator, green iguanas will attempt to flee, and if near a body of water, they dive into it and swim away. If cornered by a threat, the green iguana will extend and display the dewlap under its neck, stiffen and puff up its body, hiss, and bob its head at the aggressor. If threat persists the iguana can lash with its tail, bite and use its claws in defense. The wounded are more inclined to fight than uninjured prey.

Green iguanas use "head bobs" and dewlaps in a variety of ways in social interactions, such as greeting another iguana or to court a possible mate. The frequency and number of head bobs have particular meanings to other iguanas.

Green iguanas are hunted by predatory birds and their fear of these is exploited as a ploy to catch them in the wild. The sound of a hawk's whistle or scream makes the iguana freeze and it becomes easier to capture. 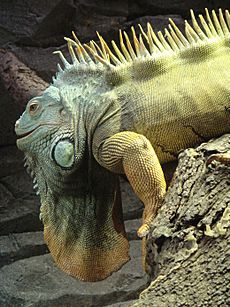 A male green iguana with spines and dewlap

Green Iguanas are primarily herbivores, with captives feeding on leaves such as turnip greens, mustard greens, dandelion greens, flowers, fruit, and growing shoots of upwards of 100 different species of plant. In Panama one of the green iguana's favorite foods is wild plum, Spondias mombin.

Although they will consume a wide variety of foods if offered, green iguanas are naturally herbivorous and require a precise ratio of minerals (2 to 1 calcium to phosphorus) in their diet. It is important for captive iguanas to have a variety of leafy greens along with fruits and vegetables such as turnip greens, collards, butternut squash, acorn squash, mango,and parsnip. Juvenile iguanas often eat feces from adults in order to acquire the essential microflora to digest their low-quality and hard-to-process vegetarian-only diet.

There is some debate as to whether captive green iguanas should be fed animal protein. There is evidence of wild iguanas eating grasshoppers and tree snails, usually as a byproduct of eating plant material. Wild adult green iguanas have been observed eating birds' eggs. Zoologists, such as Adam Britton, believe that such a diet containing protein is unhealthy for the animal's digestive system resulting in severe long-term health damage including kidney failure and leading to premature death. On the other side of the argument is that green iguanas at the Miami Seaquarium in Key Biscayne, Florida, have been observed eating dead fish and individuals kept in captivity have been known to eat mice without any ill effects. De Vosjoli writes that captive animals have been known to survive and thrive on eating nothing but whole rodent block, or monkey chow, and one instance of romaine lettuce with vitamin and calcium supplements. However, it is only recommended that captive iguanas not be fed lettuce or meat, and instead receive the vitamins and minerals they need via a purely herbivore diet.

All content from Kiddle encyclopedia articles (including the article images and facts) can be freely used under Attribution-ShareAlike license, unless stated otherwise. Cite this article:
Green iguana Facts for Kids. Kiddle Encyclopedia.