The Audubon Zoo is an American zoo located in New Orleans, Louisiana. It is part of the Audubon Nature Institute which also manages the Aquarium of the Americas, Audubon Louisiana Nature Center, Freeport-McMoran Species Survival Center, Audubon Park, and Audubon Coastal Wildlife Network. It covers 58 acres (23 ha) and is home to over 2,000 animals. It is located in a section of Audubon Park in Uptown New Orleans, on the Mississippi River side of Magazine Street. The zoo and park are named in honor of artist and naturalist John James Audubon who lived in New Orleans starting in 1821.

Some of the exhibits include lions, gorillas, orangutans, and the Louisiana swamp exhibit. It is also home to a rare white leucistic alligator with blue eyes. It is open year-round Wednesday through Sunday, except Mardi Gras, Thanksgiving, and Christmas Day. 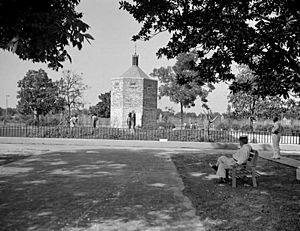 The site of the zoo has housed animal exhibits since the World Cotton Centennial 1884 Exhibition World's Fair. The current zoo was not built until the early 20th century. A flight cage has been in it since 1916. During the boom of the 1920s many additions were made; the sea lion pool with neo-classical columns from 1928 can still be seen today, as can a few art nouveau buildings later used as a reptile exhibit. 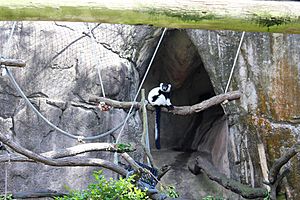 During the Great Depression a $400,000 expansion of the zoo was conducted by the Works Progress Administration. Many new cages were constructed, along with an artificial hill known as "Monkey Hill", built to show the children of relatively flat New Orleans what a hill looks like. Locals claim Monkey Hill to be the highest point in New Orleans, although another artificial hill in City Park competes for that title.

By the early 1970s, the zoo had fallen into a state of decay. The small prison-like brick and steel bar cages constructed by the WPA were no longer considered appropriate environments for many of the animals displayed within them. A study suggested that the zoo should be closed down unless the city could make a major commitment to upgrade it. City government, local businesses, and private citizens rallied in support of it, and in 1975 the city's voters approved a measure to finance its rebuilding. Zoo grounds were expanded from 14 to 50 acres (57,000 to 200,000 m2). By the end of the decade, the Audubon Zoo was already well on its way to becoming one of the finest in the United States. 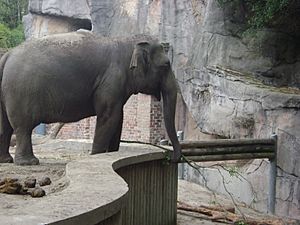 This is one of three Asian elephants at the zoo.

More improvements and expansions continued into the 21st century, making the Audubon Zoo popular not only with locals but also drawing substantial numbers of tourists visiting from other states and nations.

In 1987, an alligator nest was discovered with 18 freshly hatched babies with white hides—an extraordinary natural mutation called leucism (they are not albino). They received much attention when they went on display and became a symbol of the zoo.

In 1990, the Audubon Institute, which manages the zoo, opened the Aquarium of the Americas in the CBD at the edge of the French Quarter. Some of the white alligators were transferred to there, and a riverboat began service taking visitors between the facilities.

The WPA-era Monkey Hill, a favorite landmark of generations of New Orleans children, underwent extensive renovation in the early 21st century, including the addition of a waterfall for young children to play in, a rope web that goes to the summit (which now has statues of lions), and a 20-foot (6 m) high "safari outpost" at the base of the hill. For posterity's sake, a portion of it was left as grass, so that children can still roll down it. 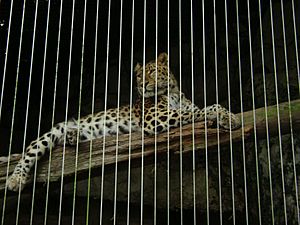 In 2005, Hurricane Katrina hit New Orleans, followed by severe consequences in the devastating aftermath of the storm. During the hurricane, zoo staff found refuge in the reptile house, which was apparently designed to withstand a major hurricane. Located on high ground atop an old natural river levee, it was not flooded. The majority of the animals survived—only three died—and the only major damage was downed trees. However, the zoo was short on food and other necessities in the days after the storm, and pumps were overheating.

The fact that the zoo sustained only minor damage can be attributed to disaster planning and its location on high ground. Zoo curator Dan Maloney was quoted as saying, "The zoo had planned for years for the catastrophic storm that has long been predicted for New Orleans."

For a period around 2011 the Lycée Français de la Nouvelle-Orléans (LFNO) used three rooms at the zoo as classrooms on a temporary basis.

On 14 July 2018, a jaguar escaped through the roof of its enclosure, killing six animals and injuring another three before being recaptured. The incident occurred before the zoo had opened. 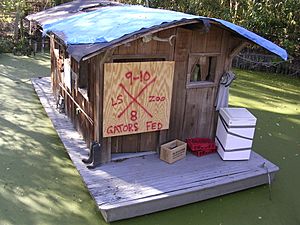 Swamp house after Hurricane Katrina, in 2007

This exhibit is primarily outdoors, housing many samples of animals native to southern Louisiana. These include black bears, raccoons, river otters, nutria, cottonmouth, copperhead, various colubrids, leucistic, or "white," alligators, and a number of normally pigmented American ones.

After Hurricane Katrina, it was thematically decorated to mimic the scenes seen around the city. There was a small refrigerator taped up outside of the front door, a blue tarp stretched over the roof, and a marking that indicated no casualties were found in it, rather, that the eight alligators that inhabit it were fed with the notion of the number 8 and "Gators Fed"

One of the newer and more famous residents of the Reptile Encounter exhibit is the Komodo dragon. Many other animals are also housed here, including the beaded lizard, Gila monster, green anaconda, reticulated python, gaboon viper, rattlesnake, caiman, and quite a few other reptiles and amphibians.

All content from Kiddle encyclopedia articles (including the article images and facts) can be freely used under Attribution-ShareAlike license, unless stated otherwise. Cite this article:
Audubon Zoo Facts for Kids. Kiddle Encyclopedia.