The sika deer (Cervus nippon) is a member of the deer family Cervidae. It lives in East Asia. It is found in mixed deciduous forests to the north, and mixed subtropical deciduous and evergreen forests to the south. 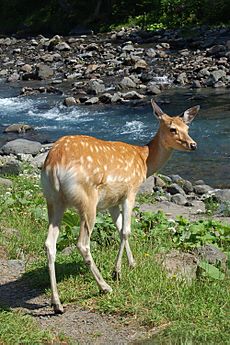 The sika deer is one of the few deer species that does not lose its spots upon reaching maturity. Spot patterns vary with region. The mainland subspecies have larger and more obvious spots, in contrast to the Taiwanese and Japanese subspecies, whose spots are nearly invisible. Many introduced populations are from Japan, so they also lack significant spots.

The color of the pelage ranges from mahogany to black, and white individuals are also known. During winter, the coat becomes darker and shaggier and the spots less prominent, and a mane forms on the back of the males' necks. They are medium-sized herbivores, though they show notable size variation across their several subspecies and considerable sexual dimorphism, with males invariably much larger than females. They can vary from 50 to 110 cm (20 to 43 in) tall at the shoulder and from 95 to 180 cm (37 to 71 in) in head-and-body length. The tail measures about 7.5–13 cm (3.0–5.1 in) long.

Sika stags have stout, upright antlers with an extra buttress up from the brow tine and a very thick wall. A forward-facing intermediate tine breaks the line to the top, which is usually forked. Occasionally, sika antlers develop some palmation (flat areas). Females carry a pair of distinctive black bumps on the forehead. Antlers can range from 28 to 45 cm (11 to 18 in) to more than 80 cm (30 in), depending on the subspecies. Stags also have distinctive manes during their mating period (rut). 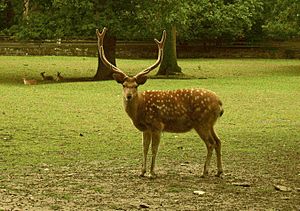 Sika deer can be active throughout the day, though in areas with heavy human disturbance, they tend to be nocturnal. Seasonal migration is known to occur in mountainous areas, such as Japan, with winter ranges being up to 700 m (2,300 ft) lower in elevation than summer ranges.

Lifestyles vary between individuals, with some occurring alone while others are found in single-sex groups. Large herds gather in autumn and winter. Males spend most years alone occasionally forming herds together. Females with fawns only form herds during birthing season. The sika deer is a highly vocal species, with over 10 individual sounds, ranging from soft whistles to loud screams. 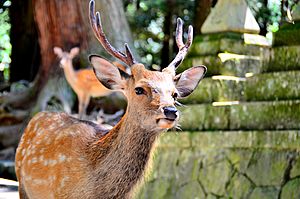 Sika males are territorial and keep harems of females during their rut, which peaks from early September through October, but may last well into the winter. Territory size varies with habitat type and size of the buck; strong, prime bucks may hold up to 2 ha (5 acres). Territories are marked by a series of shallow pits or "scrapes", which is digging holes (up to 1.6m in wide and 0.3m in deep) with forefeet or antlers, into which the males urinate and from which emanates a strong, musky odor. Fights between rival males for territorial disputes, which occur by using hooves and antlers, are sometimes fierce and long and may even be fatal. 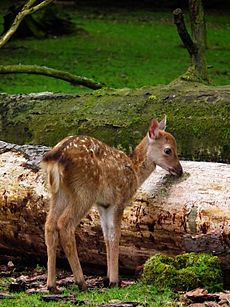 The sika deer may interbreed with the red deer, the closest relative; hybrid descendants may have adaptive advantages over purebred relatives.

In Nara Prefecture, Japan, the deer are also known as "bowing deer", as they bow their heads before being fed special shika senbei (鹿せんべいcode: ja is deprecated , called "deer cookies"). However, deer bow heads to signal that they are about to headbutt. Therefore, when a human 'bows' to a deer, the deer assume the same stance and may charge and injure the human. Deer headbutt both for play and to assert dominance, as do goats. Sika deer are found throughout the city of Nara and its many parks and temples like Tōdai-ji, as they are considered to be the messengers of the Shinto gods.

Sika deer are found in the temperate and subtropical forests of eastern Asia, preferring areas with dense understory, and where snowfall does not exceed 10–20 cm (3.9–7.9 in). They tend to forage in patchy clearings of forests. Introduced populations are found in areas with similar habitats to their native ranges, including Western and Central Europe, Eastern United States, and New Zealand.

All content from Kiddle encyclopedia articles (including the article images and facts) can be freely used under Attribution-ShareAlike license, unless stated otherwise. Cite this article:
Sika deer Facts for Kids. Kiddle Encyclopedia.