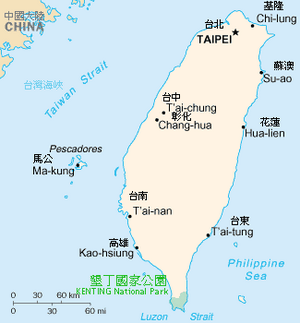 The meaning of "Kenting" is pathfinders or pioneers.

The park was the home of many Aboriginal cultures. Seventeen prehistoric sites have been found in the park. Most sites are over 4000 years old. The Puyama tribe, which is the main tribe in the area, the Ami tribe, and the Siraiya Makatau tribe lived in the area.

Kenting National Park was created in 1984 by Chiang Ching-kuo. The area had damage from farming and building, so it was created to protect the land.

In 2001, a Greek ship, the Amorgos, lost power while sailing to China close to the park. In 2010, the hull of the ship split. It spilt 1100 tonnes of oil which collected around the park's shoreline. It caused major damage to the sea and wildlife. Almost 4 kilometres (2.5 miles) of the shore was affected by the spill. It affected 200 bird species and 2200 plant species in the park. It killed many crabs, fish, and clams.

The park is in an area with a lot of tectonic activity.

A lot of whales used to spend the winter in the sea around the park. During the Japanese rule, whaling caused disappearances of the whales. There aren't any whales in the area now.

During the fall and the winter, a lot of migrating birds fly to the park to rest and feed. Almost 235 of the species of birds come to the park during this time. 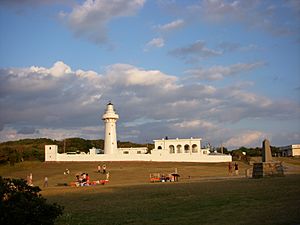 The Eluanbi Lighthouse, close to the south tip of Taiwan

Many people come to Kenting to do snorkelling, scuba diving, swimming, and hiking. There are also many nature parks, museums, and beaches in the area. They include the Sheding Nature Park, Eluanbi Lighthouse, the National Museum of Marine Biology and Aquarium, and the Jialeshui Beach.

All content from Kiddle encyclopedia articles (including the article images and facts) can be freely used under Attribution-ShareAlike license, unless stated otherwise. Cite this article:
Kenting National Park Facts for Kids. Kiddle Encyclopedia.