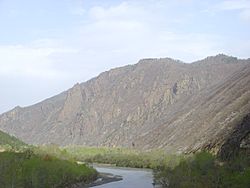 Since the easiest way to leave North Korea is through the China-North Korea border, many North Korean defectors have crossed this river to escape North Korea. Some have even escaped into Russia. However, it has become more difficult to escape the country since the government has sent more guards, more electric fences, and more traps on its borders.

All content from Kiddle encyclopedia articles (including the article images and facts) can be freely used under Attribution-ShareAlike license, unless stated otherwise. Cite this article:
Tumen River Facts for Kids. Kiddle Encyclopedia.