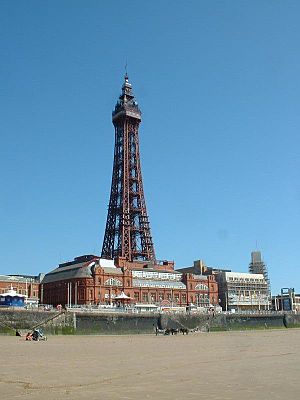 Blackpool tower, seen from the beach

Blackpool Tower is a tall structure in Blackpool, a North England seaside town.

It is one of the main tourist attractions in Blackpool. These include the tower itself, the Golden Mile, which is a row of arcades, the Irish Sea and beach, and Pleasure Beach Blackpool (a theme park).

The oldest part of the building is the old aquarium which was part of Dr Cockers' Menagarie and Aquarium since the 1870s. It was kept open to earn money while the tower building was built around it.

Since Merlin Entertainments started running the tower, the building has been repaired and new attractions have been added. The aquarium was removed to make way for a new attraction.

All content from Kiddle encyclopedia articles (including the article images and facts) can be freely used under Attribution-ShareAlike license, unless stated otherwise. Cite this article:
Blackpool Tower Facts for Kids. Kiddle Encyclopedia.