As bongos grow their horns appear. Both male and female bongos have horns.

Bongos are found in tropical jungles with dense undergrowth up to an altitude of 4,000 meters (13,000 feet) in Central Africa, with isolated populations in Kenya, and these West African countries: Cameroon, the Central African Republic, the Republic of the Congo, the Democratic Republic of Congo, the Ivory Coast, Equatorial Guinea, Gabon, Ghana, Guinea, Liberia, Sierra Leone, South Sudan. 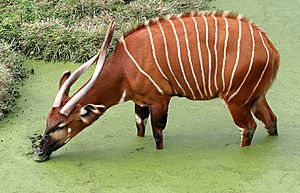 A bongo drinks from a swamp.

Historically, bongos are found in three disjunct parts of Africa: East, Central and West. Today, all three populations’ ranges have shrunk in size due to habitat loss for agriculture and uncontrolled timber cutting, as well as hunting for meat.

Bongos are one of the largest of the forest antelopes. In addition to the deep chestnut colour of their coats, they have bright white stripes on their sides to help with camouflage.

Both sexes have heavy spiral horns; those of the male are longer and more massive. All bongos in captivity are from the isolated Aberdare Mountains of central Kenya. 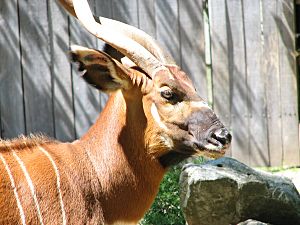 The side facial patination of an eastern bongo

The bongo sports a bright auburn or chestnut coat, with the neck, chest, and legs generally darker than the rest of the body. Coats of male bongos become darker as they age until they reach a dark mahogany-brown colour. Coats of female bongos are usually more brightly coloured than those of males. The eastern bongo is darker in color than the western and this is especially pronounced in older makes which tend to be chestnut brown especially on the front part of their bodies.

The pigmentation in the coat rubs off quite easily; anecdotal reports suggest rain running off a bongo may be tinted red with pigment. The smooth coat is marked with 10–15 vertical white-yellow stripes, spread along the back from the base of the neck to the rump. The number of stripes on each side is rarely the same. It also has a short, bristly, brown ridge of dorsal hair from the shoulder to the rump; the white stripes run into this ridge.

A white chevron appears between the eyes, and two large white spots grace each cheek. Another white chevron occurs where the neck meets the chest. The large ears are to sharpen hearing, and the distinctive coloration may help bongos identify one another in their dark forest habitats. Bongos have no special secretion glands, so rely less on scent to find one another than do other similar antelopes. The lips of a bongo are white, topped with a black muzzle. 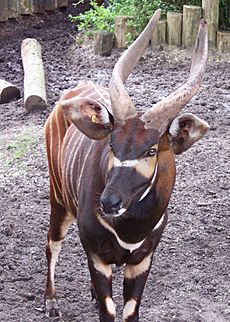 Bongos have two heavy and slightly spiralled horns that slope over their backs, and like many other antelope species, both male and female bongos have horns. Bongos are the only tragelaphids in which both sexes have horns. The horns of bongos are in the form of a lyre and bear a resemblance to those of the related antelope species of nyalas, sitatungas, bushbucks, kudus and elands.

Unlike deer, which have branched antlers shed annually, bongos and other antelopes have pointed horns they keep throughout their lives. Males have massive backswept horns, while females have smaller, thinner, and more parallel horns. The size of the horns range between 75 and 99 cm (29.5 and 39 in). The horns twist once.

Like all other horns of antelopes, the core of a bongo's horn is hollow and the outer layer of the horn is made of keratin, the same material that makes up human fingernails, toenails. and hair. The bongo runs gracefully and at full speed through even the thickest tangles of lianas, laying its heavy spiralled horns on its back so the brush cannot impede its flight. Bongos are hunted for their horns by humans. 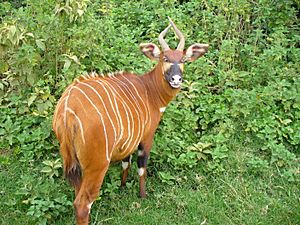 This female eastern bongo presents her hindquarters while looking over her shoulder to check for threats at Mt. Kenya Wildlife Conservancy.

Like other forest ungulates, bongos are seldom seen in large groups. Males, called bulls, tend to be solitary, while females with young live in groups of six to eight. Bongos have seldom been seen in herds of more than 20. Gestation is about 285 days (9.5 months), with one young per birth, and weaning occurs at six months. Sexual maturity is reached at 24–27 months. The preferred habitat of this species is so dense and difficult to operate in, that few Europeans or Americans observed this species until the 1960s. As young males mature and leave their maternal groups, they most often remain solitary, although rarely they join an older male. Adult males of similar size/age tend to avoid one another. Occasionally, they meet and spar with their horns in a ritualised manner and it is rare for serious fights to take place. However, such fights are usually discouraged by visual displays, in which the males bulge their necks, roll their eyes, and hold their horns in a vertical position while slowly pacing back and forth in front of the other male. They seek out females only during mating time. When they are with a herd of females, males do not coerce them or try to restrict their movements as do some other antelopes.

Although mostly nocturnal, they are occasionally active during the day. However, like deer, bongos may exhibit crepuscular behaviour. Bongos are both timid and easily frightened; after a scare, a bongo moves away at considerable speed, even through dense undergrowth. Once they find cover, they stay alert and face away from the disturbance, but peek every now and then to check the situation. The bongo's hindquarters are less conspicuous than the forequarters, and from this position the animal can quickly flee.

When in distress, the bongo emits a bleat. It uses a limited number of vocalisations, mostly grunts and snorts; females have a weak mooing contact-call for their young. Females prefer to use traditional calving grounds restricted to certain areas, while newborn calves lie in hiding for a week or more, receiving short visits by the mother to suckle.

The calves grow rapidly and can soon accompany their mothers in the nursery herds. Their horns grow rapidly and begin to show in 3.5 months. They are weaned after six months and reach sexual maturity at about 20 months. 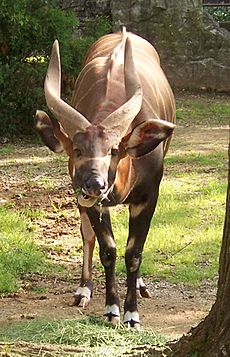 Bongos require salt in their diets, and are known to regularly visit natural salt licks. Examination of bongo feces revealed that charcoal from trees burnt by lightning is consumed. This behavior is believed to be a means of getting salts and minerals into their diets. This behavior has also been reported in the okapi. Another similarity to the okapi, though the bongo is unrelated, is that the bongo has a long prehensile tongue which it uses to grasp grasses and leaves.

Suitable habitats for bongos must have permanent water available. As a large animal, the bongo requires an ample amount of food, and is restricted to areas with abundant year-round growth of herbs and low shrubs.

Few estimates of population density are available. Assuming average population densities of 0.25 animals per km2 in regions where it is known to be common or abundant, and 0.02 per km2 elsewhere, and with a total area of occupancy of 327,000 km2, a total population estimate of around 28,000 is suggested. Only about 60% are in protected areas, suggesting the actual numbers of the lowland subspecies may only be in the low tens of thousands. In Kenya, their numbers have declined significantly and on Mt. Kenya, they were extirpated within the last decade due to illegal hunting with dogs. Although information on their status in the wild is lacking, lowland bongos are not presently considered endangered.

Bongos are susceptible to diseases such as rinderpest, which almost exterminated the species during the 1890s. Tragelaphus eurycerus may suffer from goitre. Over the course of the disease, the thyroid glands greatly enlarge (up to 10 x 20 cm) and may become polycystic. Pathogenesis of goiter in the bongo may reflect a mixture of genetic predisposition coupled with environmental factors, including a period of exposure to a goitrogen. Leopards and spotted hyenas are the primary natural predators (lions are seldom encountered due to differing habitat preferences); pythons sometimes eat bongo calves. Humans prey on them for their pelts, horns, and meat, with the species being a common local source for "bush meat". Bongo populations have been greatly reduced by hunting, poaching, and animal trapping, although some bongo refuges exist.

Although bongos are quite easy for humans to catch using snares, many people native to the bongos' habitat believed that if they ate or touched bongo, they would have spasms similar to epileptic seizures. Because of this superstition, bongos were less harmed in their native ranges than expected. However, these taboos are said no longer to exist, which may account for increased hunting by humans in recent times. 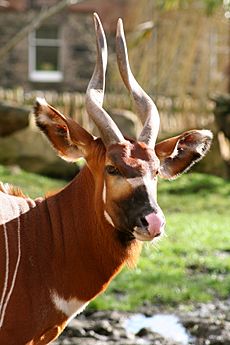 An international studbook is maintained to help manage animals held in captivity. Because of its bright colour, it is very popular in zoos and private collections. In North America, over 400 individuals are thought to be held, a population that probably exceeds that of the mountain bongo in the wild.

In 2000, the Association of Zoos and Aquariums (AZA) upgraded the bongo to a Species Survival Plan participant, which works to improve the genetic diversity of managed animal populations. The target population for participating zoos and private collections in North America is 250 animals. Through the efforts of zoos in North America, a reintroduction to the population in Kenya is being developed.

At least one collaborative effort for reintroduction between North American wildlife facilities has already been carried out. In 2004, 18 eastern bongos born in North American zoos gathered at White Oak Conservation in Yulee, Florida for release in Kenya. White Oak staff members traveled with the bongos to a Mt. Kenya holding facility, where they stayed until being reintroduced.

All content from Kiddle encyclopedia articles (including the article images and facts) can be freely used under Attribution-ShareAlike license, unless stated otherwise. Cite this article:
Bongo (antelope) Facts for Kids. Kiddle Encyclopedia.