The okapi, also known as the forest giraffe, Congolese giraffe, or zebra giraffe, is an artiodactyl mammal native to the northeast Democratic Republic of the Congo in central Africa. Although the okapi has striped markings reminiscent of zebras, it is most closely related to the giraffe. The okapi and the giraffe are the only living members of the family Giraffidae.

The okapi stands about 1.5 m (4.9 ft) tall at the shoulder and has a typical body length around 2.5 m (8.2 ft). Its weight ranges from 200 to 350 kg (440 to 770 lb). It has a long neck, and large, flexible ears. Its coat is a chocolate to reddish brown, much in contrast with the white horizontal stripes and rings on the legs, and white ankles. Male okapis have short, distinct horn-like protuberances on their heads called ossicones, less than 15 cm (5.9 in) in length. Females possess hair whorls, and ossicones are absent.

Okapis are primarily diurnal, but may be active for a few hours in darkness. They are essentially solitary, coming together only to breed. Okapis are herbivores, feeding on tree leaves and buds, grasses, ferns, fruits, and fungi. Rut in males and estrus in females does not depend on the season. In captivity, estrus cycles recur every 15 days. The gestational period is around 440 to 450 days long, following which usually a single calf is born. The juveniles are kept in hiding, and nursing takes place infrequently. Juveniles start taking solid food from three months, and weaning takes place at six months.

Okapis inhabit canopy forests at altitudes of 500–1,500 m (1,600–4,900 ft). The International Union for the Conservation of Nature and Natural Resources classifies the okapi as endangered. Major threats include habitat loss due to logging and human settlement. Extensive hunting for bushmeat, skin, and illegal mining have also led to a decline in populations. The Okapi Conservation Project was established in 1987 to protect okapi populations.

Strips cut from the striped part of the skin of an okapi, sent home by Sir Harry Johnston, were the first evidence of the okapi's existence to reach Europe

Although the okapi was unknown to the Western world until the 20th century, it may have been depicted since the early fifth century BCE on the façade of the Apadana at Persepolis, a gift from the Ethiopian procession to the Achaemenid kingdom.

For years, Europeans in Africa had heard of an animal that they came to call the African unicorn. The animal was brought to prominent European attention by speculation on its existence found in press reports covering Henry Morton Stanley's journeys in 1887. In his travelogue of exploring the Congo, Stanley mentioned a kind of donkey that the natives called the atti, which scholars later identified as the okapi. Explorers may have seen a fleeting view of the striped backside as the animal fled through the bushes, leading to speculation that the okapi was some sort of rainforest zebra.

When the British special commissioner in Uganda, Sir Harry Johnston, discovered some Pygmy inhabitants of the Congo being abducted by a showman for exhibition, he rescued them and promised to return them to their homes. The Pygmies fed Johnston's curiosity about the animal mentioned in Stanley's book. Johnston was puzzled by the okapi tracks the natives showed him; while he had expected to be on the trail of some sort of forest-dwelling horse, the tracks were of a cloven-hoofed beast. 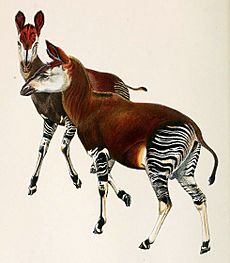 Illustration from an original painting by Sir Harry Johnston, based on preserved skins (1901)

Though Johnston did not see an okapi himself, he did manage to obtain pieces of striped skin and eventually a skull. From this skull, the okapi was correctly classified as a relative of the giraffe; in 1901, the species was formally recognized as Okapia johnstoni. 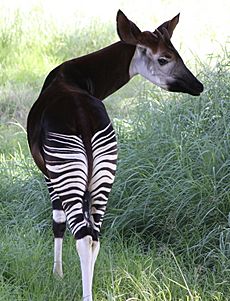 The okapi is a medium-sized giraffid, standing 1.5 m (4 ft 11 in) tall at the shoulder. Its average body length is about 2.5 m (8 ft 2 in) and its weight ranges from 200 to 350 kg (440 to 770 lb). It has a long neck, and large and flexible ears. The coat is a chocolate to reddish brown, in sharp contrast to the white horizontal stripes and rings on the legs, and the white ankles. The distinctive stripes resemble those of a zebra. These features serve as an effective camouflage amidst dense vegetation. The face, throat, and chest are greyish white. Interdigital glands are present on all four feet, and are slightly larger on the front feet. Male okapis have short, hair-covered horn-like structures called ossicones, less than 15 cm (5.9 in) in length, which are similar in form and function to the ossicones of a giraffe. The okapi exhibits sexual dimorphism, with females 4.2 cm (1.7 in) taller on average, slightly redder, and lacking prominent ossicones, instead possessing hair whorls.

The okapi shows several adaptations to its tropical habitat. The large number of rod cells in the retina facilitate night vision, and an efficient olfactory system is present. The large auditory bullae of the temporal bone allow a strong sense of hearing. The dental formula of the okapi is 0.0.3.33.1.3.3. Teeth are low-crowned and finely cusped, and efficiently cut tender foliage. The large cecum and colon help in microbial digestion, and a quick rate of food passage allows for lower cell wall digestion than in other ruminants. 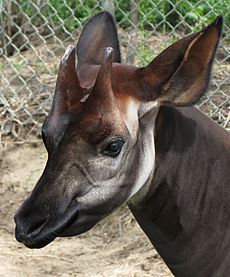 Head of a male okapi with damaged ossicones

The okapi is easily distinguished from its nearest extant relative, the giraffe. It is much smaller than the giraffe and shares more external similarities with bovids and cervids. Ossicones are present only in the male okapi, while both sexes of giraffe possess this feature. The okapi has large palatine sinuses (hollow cavities in the palate), unique among the giraffids. Morphological features shared between the giraffe and the okapi include a similar gait – both use a pacing gait, stepping simultaneously with the front and the hind leg on the same side of the body, unlike other ungulates that walk by moving alternate legs on either side of the body – and a long, black tongue (longer in the okapi) useful for plucking buds and leaves, as well as for grooming.

Okapis are primarily diurnal, but may be active for a few hours in darkness. They are essentially solitary, coming together only to breed. They have overlapping home ranges and typically occur at densities around 0.6 animals per square kilometre. Male home ranges average 13 km2 (5.0 sq mi), while female home ranges average 3–5 km2 (1.2–1.9 sq mi). Males migrate continuously, while females are sedentary. Males often mark territories and bushes with their urine, while females use common defecation sites. Grooming is a common practice, focused at the earlobes and the neck. Okapis often rub their necks against trees, leaving a brown exudate.

The male is protective of his territory, but allows females to pass through the domain to forage. Males visit female home ranges at breeding time. Although generally tranquil, the okapi can kick and butt with its head to show aggression. As the vocal cords are poorly developed, vocal communication is mainly restricted to three sounds — "chuff" (contact calls used by both sexes), "moan" (by females during courtship) and "bleat" (by infants under stress). Individuals may engage in Flehmen response, a visual expression in which the animal curls back its upper lips, displays the teeth, and inhales through the mouth for a few seconds. The leopard is the main natural predator of the okapi. 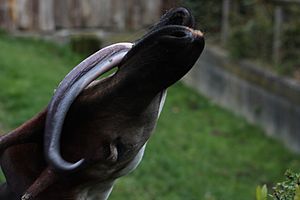 The long tongue of the okapi

Okapis are herbivores, feeding on tree leaves and buds, grasses, ferns, fruits, and fungi. They are unique in the Ituri Forest as they are the only known mammal that feeds solely on understory vegetation, where they use their 18-inch-long (46 cm) tongues to selectively browse for suitable plants. The tongue is also used to groom their ears and eyes. They prefer to feed in treefall gaps. The okapi has been known to feed on over 100 species of plants, some of which are known to be poisonous to humans and other animals. 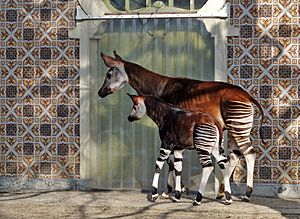 A female okapi with her calf at Antwerp Zoo

As in other ruminants, the infant can stand within 30 minutes of birth. Although generally similar to adults, newborn calves have false eyelashes, a long dorsal mane, and long white hairs in the stripes. These features gradually disappear and give way to the general appearance within a year.

The okapi's typical lifespan is 20–30 years.

The okapi is endemic to the Democratic Republic of the Congo, where it occurs north and east of the Congo River. It ranges from the Maiko National Park northward to the Ituri rainforest, then through the river basins of the Rubi, Lake Tele, and Ebola to the west and the Ubangi River further north. Smaller populations exist west and south of the Congo River. It is also common in the Wamba and Epulu areas. It is extinct in Uganda.

The okapi inhabits canopy forests at altitudes of 500–1,500 m (1,600–4,900 ft). It occasionally uses seasonally inundated areas, but does not occur in gallery forests, swamp forests, and habitats disturbed by human settlements. In the wet season, it visits rocky inselbergs that offer forage uncommon elsewhere. Results of research conducted in the late 1980s in a mixed Cynometra forest indicated that the okapi population density averaged 0.53 animals per square kilometre.

In 2008, it was recorded in Virunga National Park. 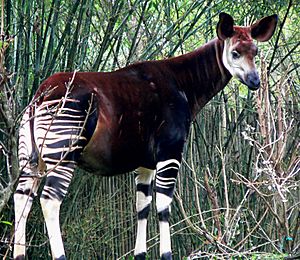 The IUCN classifies the okapi as endangered. It is fully protected under Congolese law. The Okapi Wildlife Reserve and Maiko National Park support significant populations of the okapi, though a steady decline in numbers has occurred due to several threats. Other areas of occurrence are the Rubi Tele Hunting Reserve and the Abumombanzi Reserve. Major threats include habitat loss due to logging and human settlement. Extensive hunting for bushmeat and skin and illegal mining have also led to population declines. A threat that has emerged quite recently is the presence of illegal armed groups around protected areas, inhibiting conservation and monitoring actions. A small population occurs north of the Virunga National Park, but lacks protection due to the presence of armed groups in the vicinity. In June 2012, a gang of poachers attacked the headquarters of the Okapi Wildlife Reserve, killing six guards and other staff as well as all 14 okapis at their breeding center.

The Okapi Conservation Project, established in 1987, works towards the conservation of the okapi, as well as the growth of the indigenous Mbuti people. In November 2011, the White Oak Conservation center and Jacksonville Zoo and Gardens hosted an international meeting of the Okapi Species Survival Plan and the Okapi European Endangered Species Programme at Jacksonville, which was attended by representatives from zoos from the US, Europe, and Japan. The aim was to discuss the management of captive okapis and arrange support for okapi conservation. Many zoos in North America and Europe currently have okapis in captivity.

Around 100 okapis are in accredited Association of Zoos and Aquariums (AZA) zoos. The okapi population is managed in America by the AZA's Species Survival Plan, a breeding program that works to ensure genetic diversity in the captive population of endangered animals, while the EEP (European studbook) and ISB (Global studbook) are managed by Antwerp Zoo in Belgium, which was the first zoo to have an Okapi on display (in 1919), as well as one of the most successful in breeding them.

In 1937, the Bronx Zoo became the first in North America to acquire an okapi. With one of the most successful breeding programs, 13 calves have been born there since 1991. The San Diego Zoo has exhibited okapis since 1956, and their first okapi calf was born in 1962. Since then, there have been more than 60 okapis born at the zoo and the nearby San Diego Zoo Safari Park, the most recent being Mosi, a male calf born on 21 July 2017 at the zoo. The Brookfield Zoo in Chicago has also greatly contributed to the captive population of okapis in accredited zoos. The zoo has had 28 okapi births since 1959.

All content from Kiddle encyclopedia articles (including the article images and facts) can be freely used under Attribution-ShareAlike license, unless stated otherwise. Cite this article:
Okapi Facts for Kids. Kiddle Encyclopedia.