Disney's Animal Kingdom is a theme park at the Walt Disney World Resort near Orlando, Florida, United States. It was the fourth park built there, and it opened on April 22, 1998. It is the largest Disney theme park in the world, covering more than 500 acres (202 ha). It is also the first Disney theme park to be themed around animal conservation, a philosophy once pioneered by Walt Disney himself. Disney's Animal Kingdom is accredited by the Association of Zoos and Aquariums, meaning they have met or exceeded the standards in Education, Conservation and Research.

Soon after the park opened, Disney advertised the park using the fictional word "nahtazu". It is pronounced "not a zoo". It was meant to state that the park is more than just a city zoo. Disney stopped using the word in January 2006.

The symbol of Disney's Animal Kingdom is The Tree of Life, a sculpted 14-story (145-foot-tall [44 m]), 50-foot-wide (15 m) tree. The tree is man-made. The leaves are made out of resin. Tourists can walk around the whole park to see all 325 animals carved in the bark of the tree.

In 2009, the park had around 9.59 million guests, ranking it the fifth-most visited amusement park in the United States and eighth-most visited in the world.

The park has seven themed areas.

The Oasis is the park's main entrance. It has the guest services center and some animal habitats. Guests can see muntjacs, spoonbills, ducks, wallabies and giant anteaters, among others. The main paths lead into the park, and onto Discovery Island.

A Rainforest Cafe is also at the entrance of the Oasis, but it is outside the park boundaries. Guests can eat at the restaurant without entering Disney's Animal Kingdom, while guests entering the restaurant from within the theme park are actually exiting the park and must show their tickets to go back into the park.

This is the "central hub" of Disney's Animal Kingdom, connecting almost all of the other sections of the park, except Rafiki's Planet Watch. The Tree of Life, the park's icon, is here, surrounded by animal enclosures with kangaroos, black crowned cranes, lemurs and others. The park's largest gift shops and two of its major restaurants are on Discovery Island, each with a different design theme, such as decorations based on nocturnal animals, insects and so forth. The island's other major draw is It's Tough to be a Bug!, a 4-D film starring Flik and Hopper from Disney·Pixar's A Bug's Life.

Camp Minnie-Mickey is themed as a summer camp. Here guests can meet the Disney characters such as Mickey Mouse, Minnie Mouse, Goofy and others. In the area's main theatre is Festival of the Lion King, a live stage show featuring acrobatics and musical performances inspired by The Lion King.

Set in the fictional east African village of Harambe, this area has many animal exhibits. Disney's story about Harambe is that it was once part of a Dutch colony, but a peaceful revolution made Harambe independent in 1963. Today, Harambe is the starting point for tourists and students who want to see Africa's animals in their natural habitats. 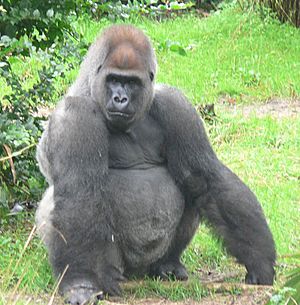 The Africa area has an exhibit of Silverback Gorillas

The village is the namesake of the Harambe Wildlife Preserve, the fictional home of Africa's main attraction, Kilimanjaro Safaris. Guests board an open-sided safari vehicle for a trip to see African animals freely roam through acres of savanna, rivers and rocky hills, including giraffes, hippos, African elephants and lions. On the nearby Pangani Forest Exploration Trail, visitors go into the forest in search of gorillas. Along the way, guests go on a nature walk through an African valley filled with Nile hippos, birds and fish.

The one section of the park not connected to Discovery Island, Rafiki's Planet Watch is instead connected to Africa. Guests board the Wildlife Express Train for the short trip to and from Planet Watch, which has three distinct areas. Guests first see Habitat Habit!, where they can see cottontop tamarins and learn about the efforts to protect these endangered primates in their natural homes. Along the way, guests can also learn how to provide animal habitats in and around their own homes.

Conservation Station shares the conservation efforts supported by the Walt Disney Company. It also gives a behind-the-scenes look into Disney's Animal Kingdom's animal care facilities, including a veterinary examination room complete with a two-way communications system so the veterinary staff can answer guest questions. Outside, Affection Section is a petting zoo with goats, sheep and other domesticated animals. 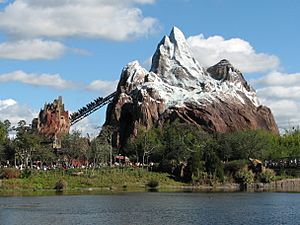 The mountains of Expedition: Everest.

Asia was the first area added to Disney's Animal Kingdom after the park opened. The Asia area opened in 1999. Like Africa, the section's attractions are part of a fictional place, the kingdom of Anandapur (which means "Place of many delights"). Anandapur is made up of two villages: the riverside village of Anandapur and Serka Zong, which is in the foothills of the Himalayan Mountains. Portraits of Anandapur's royal family, the Maharajah and his wife, can be found in most of the businesses within the two villages, and a map of the kingdom, featuring both villages and their location relative to the mountains and river can be found on the wall of the Disney Vacation Club kiosk located there. Much like Harambe, Disney legend states that Anandapur is now a center of animal research and tourism. At the Caravan Stage, these two "worlds" meet in Flights of Wonder, a live bird show where one of Anandapur's bird researchers educates a tour guide with a fear of birds about natural bird behaviors and the effects of habitat loss and conservation efforts on bird species, such as the Black Crowned Crane and American Bald Eagle.

The Maharajah Jungle Trek leads guests through the forests and ruins outside the village, which are home to many animal species, such as Komodo dragons, fruit bats, tapirs, and tigers. Nearby, Kali River Rapids is a river rapids ride along the fictional Chakranadi River through a rainforest, past an illegal logging operation and down a waterfall. Behind Anandapur is the Forbidden Mountain, the home of Expedition Everest, a roller coaster ride through the Himalayas.

DinoLand U.S.A. is inspired by the public's general interest in dinosaurs. The fictitious Dino Institute attracts those with a scientific interest in the long-extinct animals, while Chester and Hester's Dino-Rama recalls the many roadside attractions that were once scattered throughout the United States. Like the other areas of Disney's Animal Kingdom, there are animals on display.

These animals, such as the American Crocodile and Asian brown tortoise, have evolutionary links to the age of the dinosaurs. Other plant and animal species that have survived since the dinosaur era can be found along the Cretaceous Trail. At the edge of DinoLand U.S.A. is the "Theater in the Wild," which has Finding Nemo - The Musical, a live-action musical stage show based on the story of the Disney·Pixar feature film.

The Dino Institute is the home of DINOSAUR, a thrill ride trip through time to the Late Cretaceous Period. Just outside the Institute is "Dino-Sue", a casting of a Tyrannosaurus rex fossil that is the most complete dinosaur skeleton found so far. At the nearby Boneyard, children can play in a multi-leveled playground area with a mammoth fossil to be uncovered.

Chester and Hester's Dino-Rama, on the other hand, is about dinosaurs as fun. The TriceraTop Spin is a colorful ride for families, while Primeval Whirl is a spinning roller coaster for thrill-seekers. Throughout the area are carnival games and gift shops, as well as chances to meet Disney characters.

The area was sponsored by McDonald's until 2009 when the contract ran out.

All content from Kiddle encyclopedia articles (including the article images and facts) can be freely used under Attribution-ShareAlike license, unless stated otherwise. Cite this article:
Disney's Animal Kingdom Facts for Kids. Kiddle Encyclopedia.