The American crocodile (Crocodylus acutus) is a species of crocodilian found in the Neotropics. It is the most widespread of the four extant species of crocodiles from the Americas, with populations present from South Florida and the coasts of Mexico to as far south as Peru and Venezuela. Its scientific name, Crocodylus acutus, means "Pointy-snouted crocodile", for the shape of its snout.

The habitat of the American crocodile consists largely of coastal areas. It is also found in river systems, but tends to prefer salinity, resulting in the species staying in brackish lakes, mangrove swamps, lagoons, cays, and small islands.

Other crocodiles also have tolerance to saltwater due to salt glands underneath the tongue, but the American crocodile is the only species other than the saltwater crocodile to commonly live and thrive in saltwater. They can be found on beaches and small island formations without any freshwater source, such as some of the many cays and islets across the Bahamas and the Caribbean. They are also found in hypersaline lakes; one of the largest known populations inhabits the Lago Enriquillo.

American crocodiles feed mostly on fish, but large individuals may prey on larger animals, such as deer. The crocodile looks like it is a log, and hides beneath the surface of the water. When the deer comes down to the water to drink, the crocodile lunges out of the water, grabs the deer in its jaws, and pulls it underwater, where it drowns.

After the deer is dead, the crocodile will grab a piece of meat in its jaws and spin around in a "death roll". American crocodiles are a somewhat aggressive crocodile species, and have been known to attack humans. Attacks on humans are rare, but happen most often in Mexico. 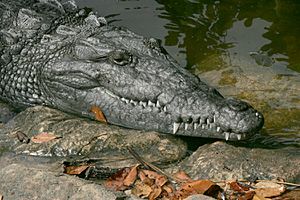 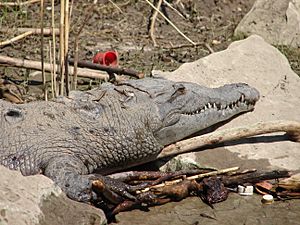 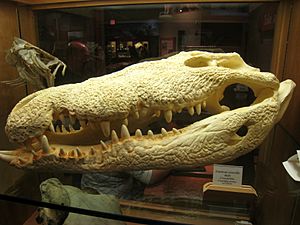 Like all crocodiles, the American crocodile is a quadruped, with four short, stocky legs, a long, powerful tail and a scaly hide with rows of ossified scutes running down its back and tail. Its snout is elongated and includes a strong pair of jaws. Its eyes have nictitating membranes for protection along with lacrimal glands, which produce tears.

The nostrils, eyes, and ears are situated on the top of its head, so the rest of the body can be concealed underwater for surprise attacks. Camouflage also helps it prey on food. The snout is relatively longer and narrower than that of the American alligator. 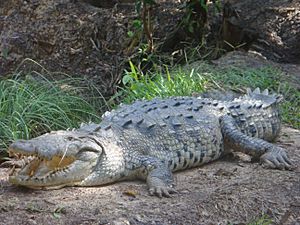 American crocodiles are also paler and more grayish than the relatively dark-hued American alligator. This crocodile species normally crawls on its belly, but it can also "high walk". Larger specimens can charge up to nearly 10 mph (16 km/h). They can swim at as much as 20 mph (32 km/h) by moving their bodies and tails in a twisting fashion, but they cannot keep up this speed. 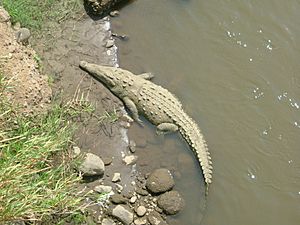 Two biologists working with the History Channel series MonsterQuest spotted and filmed an American crocodile they estimated to be 5 to 5.5 m (16 ft 5 in to 18 ft 1 in), deep within Everglades National Park in Florida. 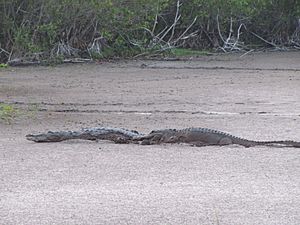 American crocodiles in the United States coexist with the American alligator, and are primarily found south of the latitude of Miami, in Everglades National Park, Florida Bay, Biscayne Bay, and the Florida Keys. 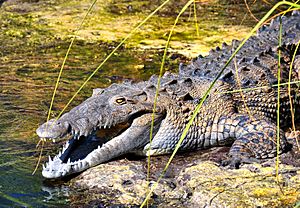 Some individuals wander northward to warm summer waters and have been sighted in Sarasota County and Palm Beach County. 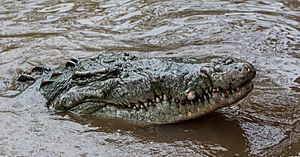 The snout of the American crocodile is broader than some specialized fish-eating crocodilians and the freshwater crocodile, allowing it to supplement its diet with a wider variety of prey. In addition the snout gets even broader and bulkier as the animal matures.

Prey species have ranged in size from the insects taken by young American crocodiles to full-grown cattle taken by large adults, and can include various birds, mammals, turtles, crabs, snails, frogs, and occasionally carrion.

In Haiti, hatchling and juvenile American crocodiles lived primarily off of fiddler crabs, making up 33.8% and 62.3% of the diet by weight, respectively.

Elsewhere, aquatic insects and their larvae and snails are near the top of the food list for American crocodiles at this very early age. Immature American crocodiles have a more varied diet that can include insects, fish, frogs, small turtles, birds and small mammals. 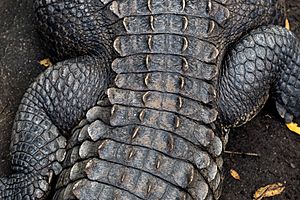 In Florida, bass, tarpon and especially mullet, large crabs, snakes, mammals that habit the riparian and coastal regions of the Everglades, such as opossums and raccoons appeared to be the primary prey of sub-adult and adult American crocodiles.

In Haiti, adults appeared to live largely off of various birds such as heron, storks, flamingos, pelicans, grebes, coots and moorhens, followed by marine fish including Tilapia and Cichlasoma, at times being seen to capture turtles, dogs and goats. 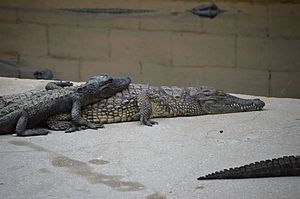 In February or March, females will begin to create nests of sand, mud, and dead vegetation along the water's edge. Nest location is crucial, and with the correct amount of vegetation, the eggs will develop within a small temperature range.

Because sex determination is temperature-dependent in crocodiles, slight changes in temperature may result in all-male or all-female clutches, which would possibly harm the health of the population.

About one month later, when it is time to lay, the female will dig a wide hole diagonally into the side of the nest and lay 30 to 70 eggs in it, depending on her size. After laying, the female may cover the eggs with debris or leave them uncovered. The white, elongated eggs are 8 cm (3.1 in) long and 5 cm (2.0 in) wide and have a number of pores in the brittle shell. 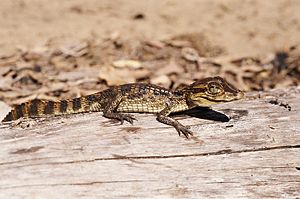 An American crocodile hatchling in Colombia

Crocodile eggs are somewhat brittle, but softer than bird eggs. Young of this species hatch after 75–80 days.

During the 75- to 80-day incubation period, the parents will guard the nest, often inhabiting a hole in the bank nearby. Females especially have been known to guard their nests with fiercely. But in spite of these precautions, American crocodile eggs sometimes fall prey to raccoons, coatis, foxes, skunks or other scavenging mammals (even coyotes in Mexico and American black bears in south Florida), as well as large predatory ants, crabs and vultures.

The hatchlings, which are 24 to 27 cm (9.4 to 10.6 in) in length, have been reported to actively hunt prey within a few days of hatching. It is not uncommon for the mother to care for her young even weeks after they have hatched, remaining attentive to their calls and continuing to provide transportation. About five weeks after hatching, the young American crocodiles disband in search of their own independent lives. 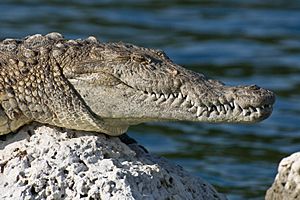 This species exists mostly in tropical areas with distinct rainy seasons, and the young hatch near the time of the first rains of the summer (July–August), after the preceding dry season and before the bodies of water where they live flood. During the hatching process, when the young American crocodiles are most vulnerable to predation, they will instinctively call out in soft, grunt-like croaks. These sounds trigger the female to attend to the nest, uncovering the eggs if they have been covered. Then she will aid the hatchlings in escaping their eggs and scoop them up with her mouth, carrying them to the closest water source. 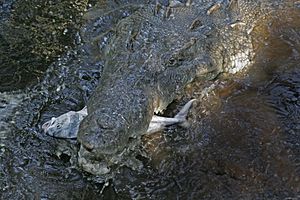 Due to hide hunting, pollution, loss of habitat, and removal of adults for commercial farming, the American crocodile is endangered in parts of its range. In 1972, Venezuela banned commercial crocodile skin harvesting for a decade, as a result of 1950s and 1960s over-hunting.

One thousand to 2,000 American crocodiles live in Mexico and Central and South America, but populations are data deficient. The American crocodile is considered a vulnerable species, but has not been assessed since 1996. 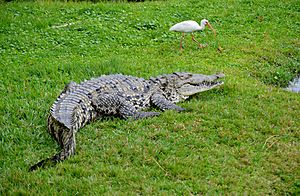 It has an estimated wild population of 500 to 1,200 in southern Florida. On March 20, 2007, the United States Fish and Wildlife Service declassified the American crocodile as an endangered species, downgrading its status to "threatened".

The reptile remains protected from illegal harassing, poaching, or killing under the federal Endangered Species Act. In southern Florida, 67.8% of American crocodile mortality was attributed most likely to road collisions (found dead by the road). 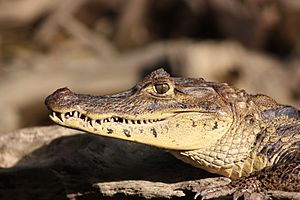 American crocodiles are dangerous to humans; attacks in Mexico, Costa Rica, and Panama are not unprecedented.

Crocodiles are, as a general rule, more aggressive than alligators, at least towards humans.

All content from Kiddle encyclopedia articles (including the article images and facts) can be freely used under Attribution-ShareAlike license, unless stated otherwise. Cite this article:
American crocodile Facts for Kids. Kiddle Encyclopedia.