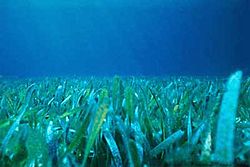 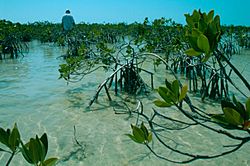 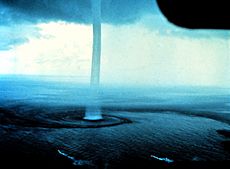 A waterspout off the Florida Keys

Florida Bay is the large shallow lagoon between the southern end of the Florida mainland (the Florida Everglades) and the Florida Keys, a long series of small islands. The Bay is significant for its ecology of sea grass and the organisms that live there.

Nearly all of Florida Bay is included in Everglades National Park. The southern edge, along the Florida Keys is in the Florida Keys National Marine Sanctuary. Outside the Bay is the northern part of the Keys, and outside them is the Florida Reef, the only barrier coral reef in North America.

The Bay has the largest known seagrass bed in the world. Sea grass beds contain many species from various phyla. Seagrass herbivory is important in the food chain, and eaten by a number of animals, some of them rare. Species that feed on sea grass include green turtles, dugongs, manatees, fish, geese, sea urchins and crabs. The mangrove swamps in the shallow areas are also quite extensive.

Florida Bay is a model for the conditions which produced limestones on many of the continental shelves of the world. It is a kind of carbonate 'factory'.p144

In the Florida Bay a type of flowering plant called sea grass is in abundance. Also in abundance is white, milky water full of calcium carbonate. This is mainly formed by Melobesia, a small red alga which lives on the sea grass.p151 Also, the organisms produce huge amounts of slime, which is a polysaccharide. There is good reason to think the slime is produced by the algae to control the way their carbonate skeletons are formed.p139 As a side-effect the slime limits the amount of carbonate which goes into solution in the water, so most of it gets deposited on the bottom.p155

Waterspouts are a feature of the area. There are as many as 500 waterspouts per year. They are common from June to October, but can occur at other times.

All content from Kiddle encyclopedia articles (including the article images and facts) can be freely used under Attribution-ShareAlike license, unless stated otherwise. Cite this article:
Florida Bay Facts for Kids. Kiddle Encyclopedia.