Sarasota County is located in Southwest Florida on the Gulf Coast. At the 2020 US census, the population was 434,006. Its county seat is Sarasota and its largest city is North Port. Sarasota County is part of the North Port–Sarasota–Bradenton, FL metropolitan statistical area. 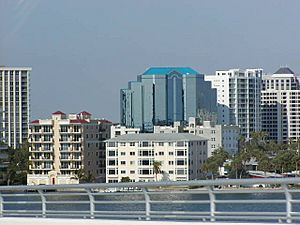 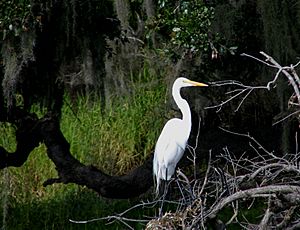 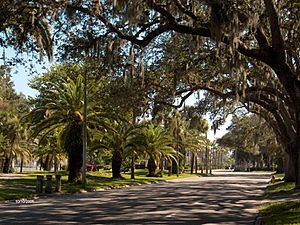 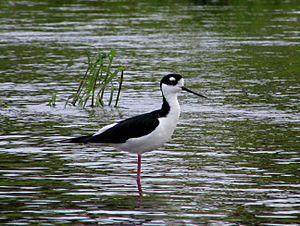 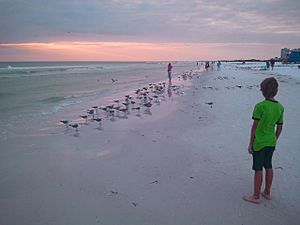 Sarasota County was created in 1921. After acquisition by the United States as a territory and once Florida obtained state status, the area now included in the county had been governed by Hillsborough County, then Manatee County as the state was divided into smaller and smaller governmental organizations. Manatee County was carved up to allow the creation of three more counties as well.

Although the name was associated with the area from the beginning of European contacts the origin of the name, Sarasota, is unknown. Some believe a fanciful story created for a popular early twentieth-century pageant held in Sarasota, that it was named after the daughter of famous explorer Hernando de Soto's daughter Sara.

According to the Florida League of Cities, the name first appeared in print as "Zarazote" on a 1763 land grant map.

Joseph Daniel Anderson was one of the pioneers of the Sarasota area. He established his homestead in the Forked Creek area in 1886 and became an early leader in what now is southern Sarasota County (having been Manatee County from 1855 until 1921).

The following is a transcript from a Sarasota County historical marker that was erected in a park dedicated to Anderson on Manasota Key.

"After the Civil War, many Georgians moved their families to Southern Florida. Joseph Daniel "Jody" Anderson, born in Georgia in 1867, was a child when his father moved to the Tampa/Sara Sota area. In 1884, Joseph became the head of the Anderson family. Two years later, he moved his family to Southern Manatee County. He homesteaded the land in the Mystic River (Forked Creek) Valley. In 1890 he married Helen Alice Johnson of Sarasota. They had eleven children. Eight survived.

With only hand tools, Anderson converted the Florida wilderness into an agricultural industry. This fertile land produced vegetables, sugar cane and citrus. In the vast Myakka/Pinedale area, he raised his cattle and swine. He and brother Moses "Lee" prospered in ranching until the Range Law Act curtailed the right to use this land for grazing.

Sleds (later wagons) were used to move the farm produce, fruit and cattle to Lemon Bay where they were transferred to draft boats and transported to ships at Boca Grande. Some of the wagons were rafted across the bay to Manasota Beach where the produce was ferried to Cuban smacks and later to American schooners.

Anderson pioneered commercial fishing in North Lemon Bay which teemed with schools of mullet and other fish. The Andersons fished with nets made of cotton and flax twine over which they poured a heavy lime solution to prevent rot. Their base of operation included land storage facilities on the shore and on the beach (Manasota) to salt, dry and pack the fish in barrels. Upon the arrival of run boats with ice from Tampa, the Andersons could ship fresh fish and produce.

Joseph Daniel "Jody" Anderson was a quiet family man who never sought publicity. However, before Sarasota County was organized, he served as deputy sheriff and game warden in the Pinedale/Manasota area. The Anderson family built the area's first school (Pinedale) of which Jody was trustee. He also organized the first church in the area. Anderson actively supported the creation of Sarasota County from Manatee County and in 1922, became the first elected county commissioner from District 4. After the death of his first wife, he married Mary Ethel Morgan with whom he raised four more children. Joseph Daniel Anderson died in 1939."

In addition to local parks there are several preserve areas including: 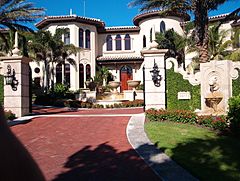 Some areas of Sarasota County, such as Casey Key near Nokomis, are very wealthy.

Sarasota County is home to Ed Smith Stadium, where the Baltimore Orioles currently have spring training. The Orioles also have minor league facilities at Twin Lakes Park. On January 2017, the Braves announced a formal agreement to move their Spring Training home to North Port, FL.

As of January 2018[update], the top private employers for Sarasota County are as follows:

As of October 2018[update], the top employees for Sarasota County, including public sector jobs, are as follows:

Sarasota County residents may obtain library cards for free and valid library cards may be used to check out materials at all ten Sarasota County libraries. Manatee and Charlotte County residents, as well as library users from any of the Tampa Bay Library Consortium libraries may register as reciprocal borrowers and check out materials in Sarasota County. Non-resident cards are available for purchase and offer the same privileges as resident cards.

The library system provides a variety of services which include adult, teen and children's materials. Computers for public use are available at all nine Sarasota County Libraries and free wireless access in the libraries is provided by the Sarasota County Government. The library system has licensing to the Cloud Library, OverDrive, Inc. and Freegal Music. Ask a Librarian, the on-line Florida librarian reference system is available through the Sarasota County Public Library System. Sarasota County residents have access to the Pinellas Talking Book Library as well as a Books-by-Mail service. The Selby Public Library has been a selective depository in the Federal Depository Library Program and receives almost 50% of the government publications distributed through the program. Additionally, the Sarasota County Library System is an organization member of the Florida Library Association.

The first library, which was established in 1907 by the Sarasota Town Improvement Society. County libraries have been established in response to community demands and needs.

The first libraries were autonomous with the Head Librarians reporting directly to the County Administrator. Sarasota Public Library was managed by Betty Service, the Englewood library by Harriet Ives, and Venice by Jean McGuire. Joan Hopkins directed and coordinated library services for the rapidly growing population. She directed the establishment of Gulf Gate Public Library, North Port Public Library, Frances T. Bourne Jacaranda Public Library and the new downtown Sarasota library, and laid the groundwork for building future libraries in the county.

All content from Kiddle encyclopedia articles (including the article images and facts) can be freely used under Attribution-ShareAlike license, unless stated otherwise. Cite this article:
Sarasota County, Florida Facts for Kids. Kiddle Encyclopedia.