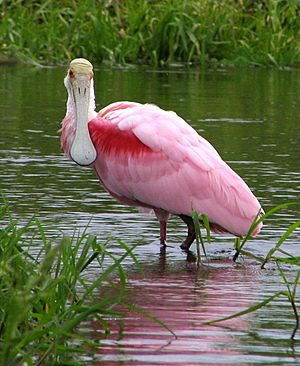 Myakka River State Park is a Florida State Park, that is located nine miles (14 km) east of Interstate 75 in Sarasota County and a portion of southeastern Manatee County on the Atlantic coastal plain. This state park consists of 37,000 acres (150 km2), making it one of the state's largest parks. It is also one of the oldest parks in the state. It was delineated in the 1930s by the Civilian Conservation Corps. A small portion (1,920 acres or 7.8 km2) of the park was the gift of the family of Bertha Palmer to the state. The park is named after the Myakka River.

A karst sinkhole named Deep Hole is located on the northwest bank of the Myakka River in the Wilderness Preserve. The sink is 41 meters deep though no evidence of a spring was found by a 2011-2012 research team. 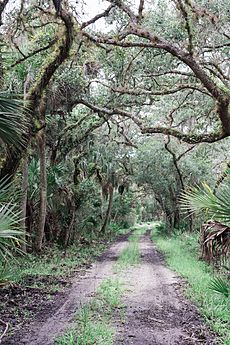 The park in summer

The park is noted for its wildlife and some of the rare birds seen only in Florida, such as the roseate spoonbill, frequent the park. Native flora flourishes in the park. There are many species of fish, amphibians, reptiles, and mammals to learn about and enjoy watching as well.

Myakka River State Park has an excellent system of hiking trails. Walking trails crisscross the eastern side of the park.

Horseback riding and biking is permitted on certain designated trails and roads in the park. This part of the park is dominated by expanses of very low vegetation, fields of palmetto, that make a transition to islands, or hammocks, of tall pine and oak trees.

A good portion of the park is accessible by automobile. Myakka River State Park's main road, a 6.5-mile drive between the North and South ends, leads visitors to a boardwalk out to the river and a lake that is excellent for bird watching.

The main drive is also popular with cyclists, runners, and skaters. Bicycle traffic can be heavy, especially on weekends and holidays.

A short walk from the main road reveals Myakka's Canopy walkway, a novel suspension bridge and tower providing researchers and visitors with views of the forest canopy and a spectacular above-the-treetops view of the entire park.

Picnic areas, canoeing, boat tours, and developed campsites are available. The park even has five cabins that were built not with logs, but with the trunks of native sabal palms.

All content from Kiddle encyclopedia articles (including the article images and facts) can be freely used under Attribution-ShareAlike license, unless stated otherwise. Cite this article:
Myakka River State Park Facts for Kids. Kiddle Encyclopedia.