Southwest Florida is the region along the southwest Gulf coast of the U.S. state of Florida. The area is known for its beaches, subtropical landscape, and winter resort economy.

Definitions of the region vary, though its boundaries are generally considered to put it south of the Tampa Bay area, west of Lake Okeechobee, and mostly north of the Everglades and to include Manatee, Sarasota, Charlotte, Lee, and Collier counties. For some purposes, the inland counties of DeSoto, Glades, and Hendry, and the thinly populated mainland section of Monroe County, south of Collier, are also included.

The region includes four metropolitan areas: the North Port-Bradenton-Sarasota MSA, the Cape Coral-Fort Myers MSA, the Naples-Marco Island MSA, and the Punta Gorda MSA. The most populous county in the region is Lee County (661,000 population), and the region's largest city is Cape Coral with a population of 165,831 as of 2013. 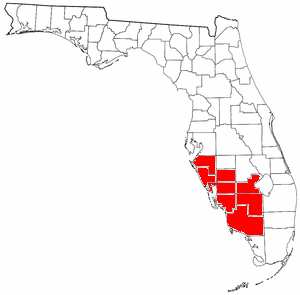 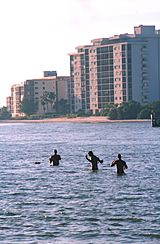 Southwest Florida was largely ignored by commercial developers until the late 1800s, and as such, lacks much of the heavier development present in other parts of Florida, such as that found in the central or southern regions of the state. In recent years however, there has been a major real estate boom focusing on downtown Fort Myers (high-rise residential condominiums); southern Lee County (commercial development and high-technology); eastern Collier County (residential development); and eastern parts of Bradenton

Overall, the region notably suffers from urban sprawl; however, numerous efforts in recent years have been made to remedy this situation, especially as the urbanized area of the coastal counties pushes eastward into agricultural land and the sensitive Everglades.

Inland counties (DeSoto, Hendry and Glades Counties) are notably rural, with the primary economic driver being agriculture. Important products grown in this area include tomatoes, beef, sugarcane, and citrus products including oranges. Agricultural harvesting in Southwest Florida employs approximately 16,000 seasonal workers, 90 percent of which are thought to be migrants. [1]

Southwest Florida is served by several major highways, including the Tamiami Trail (U.S. 41) and the Interstate 75 freeway, both of which connect the area to Tampa to the north, and Greater Miami–Ft. Lauderdale to the east. Long-term cooperative infrastructure planning is coordinated by the Southwest Florida Regional Planning Council (web site), and in heavily populated Lee County, the Metropolitan Planning Organization.

The following table shows the airports that serve the Southwest Florida area with commercial flights:

The Port of Manatee provides a full range of port services for commercial, industrial and cruise ship purposes.

Tourism is a major economic driver in the area. In addition, many seasonal residents live in the area during the winter months, as temperatures in south Florida stay very moderate during that time of year. 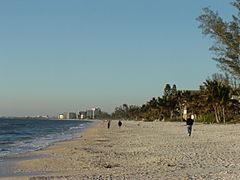 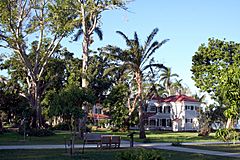 Communities listed have a population greater than 30,000 according to the 2000 census. 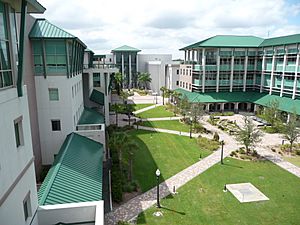 Florida Gulf Coast University (FGCU) is a public university located just south of the Southwest Florida International Airport in South Fort Myers in Lee County, Florida. The university belongs to the 12-campus State University System of Florida. FGCU competes in the ASUN Conference in NCAA Division I sports. FGCU is accredited by the Commission on Colleges of the Southern Association of Colleges and Schools to award associate's, 51 different types of bachelor's, 29 different master's, and 6 types of doctoral degrees.

Florida is the traditional home for Major League Baseball spring training, with teams informally organized into the "Grapefruit League." As of 2004[update], Southwest Florida hosts the following major league teams for spring training:

All content from Kiddle encyclopedia articles (including the article images and facts) can be freely used under Attribution-ShareAlike license, unless stated otherwise. Cite this article:
Southwest Florida Facts for Kids. Kiddle Encyclopedia.