Arcadia is a city and county seat of DeSoto County, Florida, United States. The population was 7,637 as of the 2010 census, with an estimated population of 7,722 in 2014. Arcadia's Historic District is listed on the National Register of Historic Places. 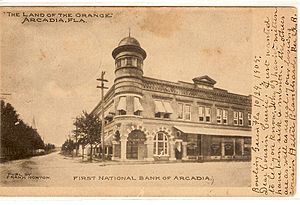 First National Bank of Arcadia pictured in this 1905 postcard 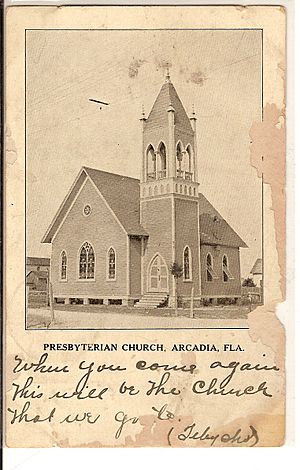 Presbyterian Church pictured in this 1907 postcard

According to The Atlas of Florida, "The Rev. James Madison ("Boss") Hendry (1839–1922) named the town in honor of Arcadia Albritton (1861–1932), a daughter of Thomas H. and Fannie (Waldron) Albritton, pioneer settlers. Arcadia had baked him a cake for his birthday and he appreciated it so much that he named the city after her."

During the late 19th century Arcadia was the county seat of what would become many counties. In 1921 legislation enacted called for Arcadia to remain the county seat of DeSoto County and resulted in the creation of the present-day counties of Charlotte, Hardee, Glades and Highlands. Prior to this breakup Arcadia's population had grown considerably, with over 1,000 permanent residents and 3,000 square miles (7,800 km2) for ranching.

On Thanksgiving Day in 1905 the town was destroyed by a large-scale fire that originated from a mid-town livery stable. The fire was exacerbated because the town did not have a working water system or fire department. The estimated monetary damage was $250,000, but there was no loss of life. Much of the business district was not spared. It would be years before the town recovered.

Oak Street is the "main street" in Arcadia. The downtown is far more elaborate than neighboring counties' downtown areas, as Arcadia is older and was their county seat prior to the formation of their present counties. Arcadia is also home to many early 20th century homes, houses of worship and several historic public buildings.

From 1917 to 1922, Arcadia was the home of Carlstrom Field, a grass airfield of the U.S. Army Air Service named for deceased aviation pioneer Victor Carlstrom. Carlstrom Field was used for pilot training both during and after World War I. In May 1941 the site again became an airfield for military primary flight training, operated by the Embry–Riddle Aeronautical Institute (now Embry–Riddle Aeronautical University). Carlstrom Field, one of several satellite fields in the Fort Myers area, also trained pilots for the Royal Air Force until its closing in 1945.

There were 2,289 households out of which 34.3% had children under the age of 18 living with them, 40.9% were married couples living together, 20.1% had a female householder with no husband present, and 33.0% were non-families. 25.7% of all households were made up of individuals and 12.5% had someone living alone who was 65 years of age or older. The average household size was 2.75 and the average family size was 3.22.

Arcadia Municipal Airport is a public-use airport located 1 mile (1.6 km) southeast of the central business district. A new fixed-base operator has been contracted for the day-to-day operations of the airport. The airport has a deep history of aviation, with the old Carlstrom & Dorr training fields in DeSoto County.

Arcadia Municipal Airport hosts an annual Aviation Day event in the month of March. Currently the event consists of a static display of aircraft, biplane rides, helicopter rides, and a skydiving demonstration, but bigger plans are in the works.

Arcadia hosts DeSoto County's annual fair usually in the month of January. While traditional aspects of a fair or carnival are provided, the event also presents livestock shows consisting of swine and cattle, which are presented by the local FFA and 4-H.

Arcadia is also the home of three rodeos. These events, which are managed by the local rodeo association, occur during the month of March, the Fourth of July holiday, and in the fall. From the profits of these events many local charities, college scholarships and causes receive funding.

Arcadia is one of the largest groupings of antique dealers in the state, all located conveniently in the downtown area. The local dealers' association sponsors a "4th Saturday Antique Fair" each month from 8 am to 3 pm, bringing an additional 60 to 120 independent dealers in for the event.

The climate in this area is characterized by hot, humid summers and generally mild to cool winters. According to the Köppen Climate Classification system, Arcadia has a humid subtropical climate, abbreviated "Cfa" on climate maps.

All content from Kiddle encyclopedia articles (including the article images and facts) can be freely used under Attribution-ShareAlike license, unless stated otherwise. Cite this article:
Arcadia, Florida Facts for Kids. Kiddle Encyclopedia.