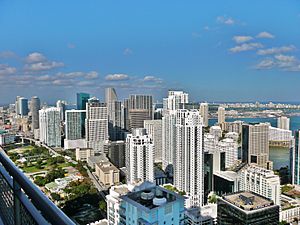 The urban neighborhood of Brickell in Downtown Miami contains the largest concentration of international banks in the U.S.

Cities in the Miami metropolitan area include Miami itself, Homestead, Hialeah and Miami Beach.

All content from Kiddle encyclopedia articles (including the article images and facts) can be freely used under Attribution-ShareAlike license, unless stated otherwise. Cite this article:
Miami metropolitan area Facts for Kids. Kiddle Encyclopedia.