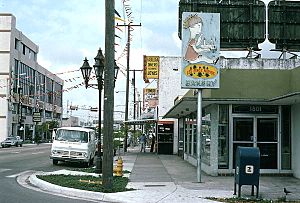 Street view of corner bakery, circa 1978 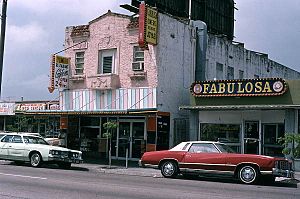 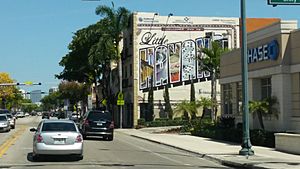 Little Havana (Spanish: Pequeña Habana) is a neighborhood of Miami, Florida, United States. Home to many Cuban exiles, as well as many immigrants from Central and South America, Little Havana is named after Havana, the capital and largest city in Cuba.

Little Havana is noted as a center of social, cultural, and political activity in Miami. Its festivals, including the Calle Ocho Festival, Viernes Culturales/Cultural Fridays, the Three Kings Parade and others, have been televised to millions of people every year on different continents. It is also known for its landmarks, including Calle Ocho (SW 8th Street/Tamiami Trail), and its Walk of Fame (for famous artists and Latin personalities, including Celia Cruz, Willy Chirino, and Gloria Estefan), the Cuban Memorial Boulevard, Plaza de la Cubanidad, Domino Park, the Tower Theater, José Martí Park, the Firestone/Walgreens Building, St. John Bosco Catholic Church, Municipio de Santiago de Cuba and others.

Little Havana is the best known Cuban exile neighborhood in the world. It is characterized by its street life, restaurants, music and other cultural activities, small business enterprises, political passion, and great warmth among its residents.

In 2015, Little Havana was included in the National Trust for Historic Preservation’s annual list of 11 Most Endangered Places. In 2017, the Trust declared it a national treasure.

Originally a lower-middle-class Southern and a thriving Jewish neighborhood in the 1930s. The name "Little Havana" emerged in the 1960s as the concentration of Cubans in the area grew sharply. Little Havana is the name affixed to a sprawling neighborhood lying immediately west of Downtown Miami. It stretches west from the Miami River for several miles. This sobriquet was applied to the Shenandoah and Riverside neighborhoods in the 1960s, following the beginnings of a vast influx of Cuban refugees there. Little Havana is famous as the cultural and political capital of Cuban Americans, and the neighborhood is a center of the Cuban exile community.

As of 2011, Little Havana has the highest concentration of Hispanics (98%) in Miami. Within the Hispanic population, the Cuban population has experienced a substantial decrease from 84% in 1979 to 58% in 1989; however, a group of Hispanics from other countries, especially those from Nicaragua, Honduras, and other Central American countries has substantially increased since the late-1990s.

A Florida Atlantic University study surveyed locals who agreed that the neighborbood is bordered approximately by the following :

As of 2000, Little Havana had a population of 49,206 residents, with 19,341 households, and 11,266 families residing in the neighborhood. The median household income was $15,213.16. The ethnic makeup of the neighborhood was 85.08% Hispanic or Latino of any race (mainly Cubans, but also many Nicaraguans and Hondurans, as well as other Latinos), 3.79% Black or African American (not including Afro-Cubans, Afro-Nicaraguans, Afro-Hondurans, and other Afro-Latinos), 10.14% Non-Hispanic White, and 0.96% of other races. 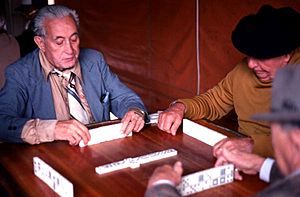 Cuban men playing dominos in Little Havana's famous Máximo Gómez Park. Dominos is a popular game in Cuban culture, and the park is famous for its many domino players who meet daily in the park.

Viernes Culturales (English: Cultural Fridays) is an artistic, cultural, and social arts and culture fair that takes place on the last Friday of each month in the historic Little Havana neighborhood of Miami in the heart of Calle Ocho (8th St. SW between 14th and 17th Avenues).

The event consists of outdoor musical performances on a stage and along the sidewalks of Calle Ocho, art exhibits along the sidewalk and in plazas and open spaces, visits to art galleries and cultural centers, cuisine tasting at participating restaurants, and films, art exhibits, and educational programs at the historic Tower Theatre. Free walking tours, led by Miami historian Dr. Paul George leave from the Tower Theater at 7pm each festival. 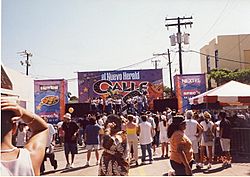 Calle Ocho is where different ethnic communities wear colors or flags representing pride in their heritage. Flags from Colombia to Nicaragua to Puerto Rico to Costa Rica and even Ireland flood the streets. Foods from different countries are usually sold, and popular music like reggaeton, salsa, bachata and merengue can be heard through the festival.

In 1977 tensions among Miami’s different ethnic groups were running high. Eight Cuban-Americans, mostly from the Kiwanis of Little Havana, were trying to come up with ideas to address the situation. They considered a bicycle race on SW Eighth Street (Calle Ocho). It was turned down because the organizers feared that it would pit one ethnic group against another. Willy Bermello came up with the idea of doing something similar to the block parties and street festivals of Philadelphia. Calle Ocho was born.

The festival takes place between 27th Ave and 4th Ave along Southwest 8th Street. Over 30 stages and hundreds of street vendors participate in the live music street festival now in its 4th decade. Calle Ocho earned an entry in the Guinness Book of World Records when 119,986 people formed the world's longest conga line on March 13, 1988.

In 2010, the Florida legislature identified the Calle Ocho-Open House 8 festival as the official state festival. 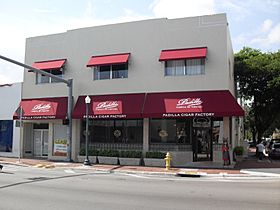 Padilla Cigar Factory, one of the cigar factories on Calle Ocho 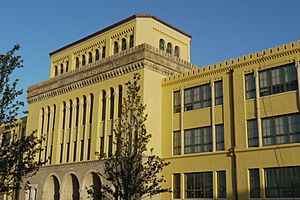 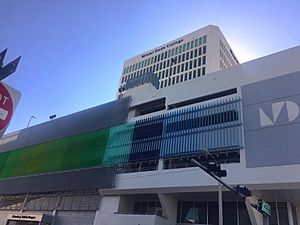 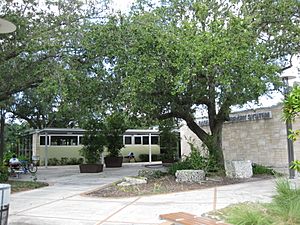 All content from Kiddle encyclopedia articles (including the article images and facts) can be freely used under Attribution-ShareAlike license, unless stated otherwise. Cite this article:
Little Havana Facts for Kids. Kiddle Encyclopedia.