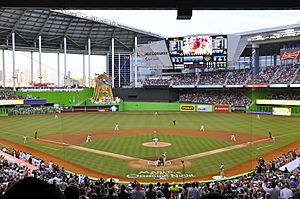 Marlins Park is a baseball park in the Miami, Florida neighborhood of Little Havana that is home to the Miami Marlins of Major League Baseball. Before Marlins Park opened in 2012, the team, then known as the Florida Marlins, played home games at the venue now known as Hard Rock Stadium. Marlins Park is located on the former site of the Orange Bowl Stadium.

All content from Kiddle encyclopedia articles (including the article images and facts) can be freely used under Attribution-ShareAlike license, unless stated otherwise. Cite this article:
Marlins Park Facts for Kids. Kiddle Encyclopedia.