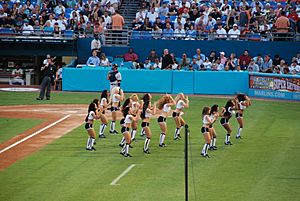 The Miami Marlins are an American professional baseball team based in Miami, Florida. The Marlins compete in Major League Baseball (MLB) as a member club of the National League (NL) East division. Their home park is Marlins Park. Though one of only two MLB franchises to have never won a division title (the other is the Colorado Rockies), the Marlins have won two World Series championships as a wild card team.

The team began play in the 1993 season as the Florida Marlins and played home games from their inaugural season to the 2011 season at Joe Robbie Stadium, which they shared with the Miami Dolphins of the National Football League (NFL). The stadium was later called Pro Player Park, Pro Player Stadium, Dolphin Stadium, Dolphins Stadium, Land Shark Stadium, and Sun Life Stadium during their tenancy. Since the 2012 season, they have played at Marlins Park in downtown Miami, on the site of the former Orange Bowl in Little Havana, Florida. The new park, unlike Sun Life Stadium (which was criticized in its baseball configuration for poor sight lines in some locations), was designed foremost as a baseball park. The new park's name is a temporary one until naming rights are purchased. Per agreement with the city and Miami-Dade County (which owns the park), the Marlins officially changed their name to the "Miami Marlins" on November 11, 2011. They also adopted a new logo, color scheme, and uniforms.

The Marlins have the distinction of winning a World Series championship in both seasons they qualified for the postseason, doing so in 1997 and 2003 — both times as the National League wild card team. They defeated the American League (AL) champion Cleveland Indians in the 1997 World Series, which was notable for shortstop Édgar Rentería driving in second baseman Craig Counsell for the series-clinching run in the 11th inning of the seventh and deciding game. The 2003 season was notable for the firing of manager Jeff Torborg after 38 games. The Marlins were in last place in the NL East with a 16–22 record at the time. Torborg's successor, 72-year-old Jack McKeon, led them to the NL wild card berth in the postseason; they defeated the New York Yankees four games to two in the 2003 World Series.

The Marlins have a wild card berth for 2020.

All content from Kiddle encyclopedia articles (including the article images and facts) can be freely used under Attribution-ShareAlike license, unless stated otherwise. Cite this article:
Miami Marlins Facts for Kids. Kiddle Encyclopedia.