Kids Encyclopedia Facts
This page is about the city. For the adjacent town, see Beloit (town), Wisconsin.

Twelve men in Colebrook, New Hampshire created the "New England Emigrating Company" in October 1836 and sent Dr. Horace White to find a suitable region of Wisconsin in which to settle. The level fields and the water power of Turtle Creek and the "unlimited gravel" in the area around what is now Beloit fixed the site of the intended village and farms. White purchased the land. At the same time as the Colebrook settlers, six families from Bedford, New Hampshire arrived and settled in the region. They said that the Rock River Valley had a "New England look", which made them feel at home. The village was platted in 1838 and was planned with wide streets which built on the New England model.

Beloit was originally named New Albany (after Albany, Vermont) in 1837 by its founder, Caleb Blodgett. The name was changed to Beloit in 1838. The name Beloit was coined to be reminiscent of Detroit.

Beloit lays claim to such inventions as the speedometer, Korn Kurls, which resemble Cheetos, are credited with the founding of the snack food industry.

Beloit's 1889 Water Tower Place began demolition in 1935, which was halted because of the cost. A historic pump station is located nearby.

The Fairbanks Flats were built in 1917 to house the rush of African Americans moving to the area from the Southern United States.

Pearsons Hall of Science was designed by the architectural firm Burnham and Root for Beloit College to use as a science center.

Downtown Beloit and the riverfront

Downtown Beloit is the historical economic, cultural and social center of the community. Located north of the confluence of the Rock River and Turtle Creek, the downtown is anchored by a core of historic buildings and the Ironworks office and industrial campus. Beloit's riverfront park system, mainly Riverside Park, extends north of the downtown along the east bank toward the Town of Beloit.

Downtown Beloit is one of two inaugural members of the Wisconsin Main Street designation.

The city is located adjacent to the Town of Beloit, Town of Turtle, and the Illinois municipality of South Beloit.

Most of Beloit's development is occurring on the east side, adjacent to Interstates 39/90 and Interstate 43, where the city annexed rural land for the extensive Beloit Gateway Industrial Park, as well as in the newly revitalized downtown located along the Rock River.

There were 13,781 households of which 36.5% had children under the age of 18 living with them, 39.6% were married couples living together, 18.3% had a female householder with no husband present, 6.4% had a male householder with no wife present, and 35.7% were non-families. 29.4% of all households were made up of individuals and 11.2% had someone living alone who was 65 years of age or older. The average household size was 2.57 and the average family size was 3.16.

Beloit has a council-manager system of government, with seven council members, each elected for two year terms. Four members are elected in even years and three in odd years. City council elections are held annually in April. The city council establishes policies for the city and appoints a city manager to implement those policies. The current city manager, Lori S. Curtis Luther, was appointed on June 1, 2015.

† indicates Beloit is home to the company's world headquarters.

Downtown Beloit is a dense cluster of mostly small shops and boutiques. The area has been recognized for increased investment and renewal since the 1990s. Upscale downtown condominiums and hotels were introduced post-2000 with the construction of the Hotel Hilton Apartments (2001), the Beloit Inn (now the Ironworks Hotel) (2003), Heritage View (2005), and the Phoenix Project (2013).

From the 1990s to 2011, downtown Beloit has received direct public and private investment totaling more than $75 million. In 2011, Beloit was a Great American Main Street Award winner. In 2012, Beloit was listed #17 on Travel and Leisure's list of America's Greatest Mainstreets.

The School District of Beloit serves more than 7,400 students in six primary schools, four intermediate schools, and one high school, with alternative programming and charter schools. Beloit Memorial High School is the city's public high school. The Roy Chapman Andrews Academy, a project-based charter school, is part of the School District of Beloit and serves grades 6 through 12. 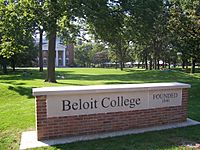 Beloit College, a private liberal arts college with undergraduate enrollment around 1,300, is located in the city. The campus has a number of prehistoric Indian mounds.

Blackhawk Technical College, a public technical school, has a campus in downtown Beloit.

Beloit is home to a professional minor league baseball team, the Beloit Snappers. The Snappers are a part of the Oakland Athletics organization. 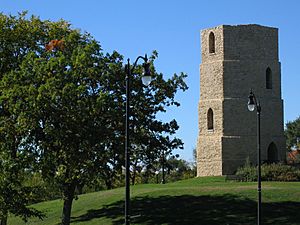 All content from Kiddle encyclopedia articles (including the article images and facts) can be freely used under Attribution-ShareAlike license, unless stated otherwise. Cite this article:
Beloit, Wisconsin Facts for Kids. Kiddle Encyclopedia.