Danica Sue Patrick (born March 25, 1982) is an American former professional racing driver. She is the most successful woman in the history of American open-wheel racing - her victory in the 2008 Indy Japan 300 is the only win by a woman in an IndyCar Series race.

Beloit, Wisconsin, where Patrick was born in 1982.

Born to a working-class family in Beloit, Wisconsin, Patrick began karting as a kid at the age of ten. Later she achieved early success by winning her class in the World Karting Association Grand National Championship three times in the mid-1990s.

She dropped out of high school with her parents' permission in 1998, and moved to the United Kingdom to further her career.

Patrick competed in Formula Vauxhall and Formula Ford before returning to the United States in 2001 due to a lack of funding. In 2002, she competed in five Barber Dodge Pro Series races for Rahal Letterman Racing.

Patrick later raced in the Toyota Atlantic Series for the next two years. Her best effort was third in the championship standings for the 2004 season where she became the first woman to win a pole position in the series.

Patrick driving for Rahal Letterman Racing at the 2006 Indianapolis 500

She was named the Rookie of the Year for both the 2005 Indianapolis 500 and the 2005 IndyCar Series.

She improved over the next two years with Rahal Letterman Racing in 2006 and later Andretti Green Racing in 2007. In 2008, Patrick followed up this victory to place sixth overall in the drivers' standings.

She improved on this to secure fifth the following season, which saw her finish a career-high third at the Indianapolis 500, the best performance by any woman at the race.

Patrick's overall form declined during 2010, but she still managed two second-places at oval tracks before leaving IndyCar after the 2011 season to focus on stock car racing full-time.

Patrick began racing stock cars in 2010 in the NASCAR Nationwide Series (now Xfinity Series) with her best result coming in the form of a fourth-place finish at Las Vegas Motor Speedway in 2011. She placed a career-high tenth in the 2012 season standings and was the second woman to clinch a pole position in the Nationwide Series after Shawna Robinson in 1994.

She stopped racing full-time after the 2017 season, but competed at the 2018 Daytona 500 and the 2018 Indianapolis 500 before officially retiring. 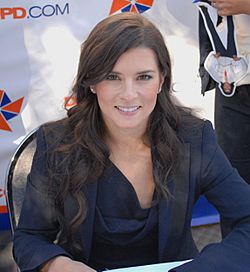 She has been a magazine cover model for FHM, Sports Illustrated, TV Guide and ESPN: The Magazine and ranked highly on beauty lists and in polls, about female athletes. People magazine named her one of the most beautiful people in the world in 2006.

Patrick has featured on sports power and popularity lists. Bloomberg Businessweek ranked her the 50th and 88th most powerful person in the world of sports in 2008 and 2010, respectively. Time magazine named her a candidate for the 100 most influential people in the world in 2009 and 2010.

Patrick promotes health-conscious lifestyles and partnered with Williams Sonoma to campaign for No Kid Hungry, an organization working to end childhood hunger in the United States.

Danica is a role model for young girls. She said there were a lot of people who doubted her because she was a girl, but you just have to ignore that and keep at it. She says you can still do "girly" things like like manicures, pedicures, shopping, getting your hair done and do things like being a successful race-car driver as well.

In 2005, Patrick married physical therapist Paul Edward Hospenthal, whom she met at his office in 2002 when she was recovering from a hip injury she sustained during a yoga session. They divorced in 2013.

From November 2012 to December 2017, she was in a relationship with fellow driver Ricky Stenhouse Jr.

Patrick was in a relationship with NFL quarterback Aaron Rodgers from February 2018 to July 2020.

All content from Kiddle encyclopedia articles (including the article images and facts) can be freely used under Attribution-ShareAlike license, unless stated otherwise. Cite this article:
Danica Patrick Facts for Kids. Kiddle Encyclopedia.