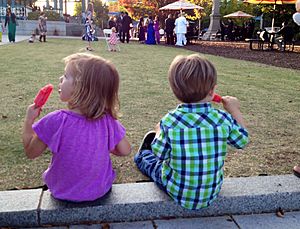 The Popsicle is a popular brand of ice pop in the United States and Canada. In these countries, the name has come to mean an ice pop of any brand. It is a type of snack that is made of flavored ice on a wooden stick. The brand name includes more than 30 different versions of the snack.

The Popsicle ice pop was accidentally invented in 1905 by 11-year-old Frank Epperson. Epperson left a mixture of powdered soda and water and a stirring stick in a cup on his porch. That night San Francisco went through unusually low temperatures, and Epperson awoke the next morning to find a frozen pop that would eventually become a favorite American snack.

At first, Epperson named his frozen snack the "Epsicle", and it became popular with his school friends. In 1923, while running a lemonade stand at an amusement park in Oakland, California, Epperson realized that he could earn money from his invention. Epperson changed the name of his treat to "Popsicle", after his children always asked for "Pop’s ’sicle", and signed up for a patent. The patent for frozen ice on a stick was issued August 19, 1924.

Around 1925, Epperson sold the popsicle rights to the brand name Popsicle to the Joe Lowe Company in New York. By 1928, Epperson had earned royalties on more than 60 million Popsicle ice pops.

All content from Kiddle encyclopedia articles (including the article images and facts) can be freely used under Attribution-ShareAlike license, unless stated otherwise. Cite this article:
Popsicle Facts for Kids. Kiddle Encyclopedia.