Jason Aldine Williams (born February 28, 1977 in Macon, Georgia) is an American country music singer and guitarist. Aldean has won two CMA awards in 2011 for "Musical Event of the Year" with "Don't You Wanna Stay" featuring Kelly Clarkson and "Album of the Year" for My Kinda Party.

Aldean is married to Jessica Ussery and they were wed on August 4, 2001. He resides with her and their two daughters Keeley and Kendyl in Nashville, Tennessee. 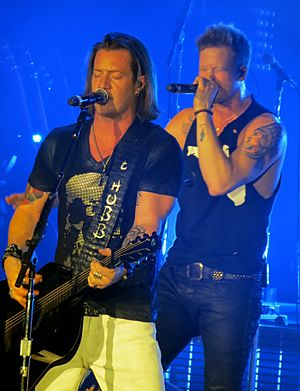 All content from Kiddle encyclopedia articles (including the article images and facts) can be freely used under Attribution-ShareAlike license, unless stated otherwise. Cite this article:
Jason Aldean Facts for Kids. Kiddle Encyclopedia.