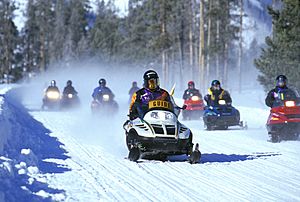 A snowmobile, also known as a motor sled, motor sledge, skimobile, snowscooter, Ski-Doo, or snowmachine, is a motorized vehicle designed for winter travel and recreation on snow. It is designed to be operated on snow and ice and does not require a road or trail, but most are driven on open terrain or trails. Snowmobiling is a sport that many people have taken on as a serious hobby.

Early snowmobiles used simple rubber tracks, but modern snowmobiles' tracks are usually made of a Kevlar composite construction. Originally, snowmobiles were powered by two-stroke gasoline internal combustion engines and since the mid-2000s four-stroke engines have also entered the market.

The second half of the 20th century saw the rise of recreational snowmobiling, whose riders are called snowmobilers or sledders. Recreational riding is known as snowcross/racing, trail riding, freestyle, boondocking, ditchbanging and grass drags. In the summertime snowmobilers can drag race on grass, asphalt strips, or even across water (see Snowmobile skipping). Snowmobiles are sometimes modified to compete in long-distance off-road races.

In northern North America, historically, isolated communities depended on dog sledding and snowshoeing as their primary method of transportation for hunting during the winter months. The Ski-Doo allowed trappers to travel greater distances faster, allowing them to expand their hunting grounds. Prospectors, mining companies, foresters, backcountry cabin owners, the Royal Canadian Mounted Police and Canadian Army also found snowmobiles very effective because they were the most economical method of transportation of small loads.

Snowmobiling near Martin Lake, Northwest Territories, Canada for a winter picnic in February.

Joseph-Armand Bombardier's tests of Ski-Dog proved that snowmobiling was fun, and snowmobiling became a new form of outdoor recreation. People who once sat dormant throughout winter were now given the opportunity in more outdoor activities. 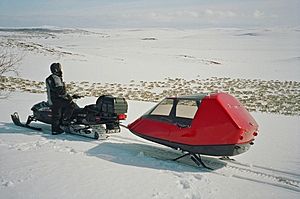 Snowmobiles are used by reindeer herders

According to the International Snowmobile Manufacturers Association, snowmobilers in Canada and the United States spend over $28 billion on snowmobiling each year. This includes expenditures on equipment, clothing, accessories, snowmobiling vacations (lodging, fuel, and food), maintenance and others. Often this is the only source of income for some smaller towns, such as Bralorne, British Columbia, that rely solely on tourism during the summer and winter months. Once a booming gold mining town, Bralorne is now a very small town with a population of 60, and it is relatively inaccessible by car in the winter. The economy relies on visits from snowmobilers, who contribute to the economy by spending money on gas, food, and hotels.

All content from Kiddle encyclopedia articles (including the article images and facts) can be freely used under Attribution-ShareAlike license, unless stated otherwise. Cite this article:
Snowmobile Facts for Kids. Kiddle Encyclopedia.