Hastings is a city in Dakota and Washington counties, in the U.S. state of Minnesota, near the confluence of the Mississippi, Vermillion, and St. Croix Rivers. Its population was 22,154 at the 2020 census. It is the county seat of Dakota County, which contains most of the city; a small part extends into Washington County along the Mississippi River's north bank. It is named for the first elected governor of Minnesota, Henry Hastings Sibley.

The advantages of Hastings' location that led to its original growth are that it is well-drained, provides a good riverboat port, and is close to a hydropower resource at the falls of the Vermillion River. Other sites closer to the river confluence are either too swampy (Dakota County) or too hilly (Washington County and Pierce County, Wisconsin).

U.S. Highway 61 and Minnesota State Highways 55 and 316 are three of Hastings's main routes.

The area around Hastings was first settled by a military detachment sent from Fort Snelling to guard a blocked shipment of supplies in the winter of 1820. A Lieutenant William G. Oliver camped in an area that would come to be known as Oliver's Grove, and in 1833 a trading post was opened there. After the Treaty of Mendota of 1851 opened the area for white settlement, Oliver's Grove was surveyed and incorporated as a city in 1857, a year before Minnesota's admission to the union. That same year Hastings was named the county seat of Dakota County. The name "Hastings" was drawn out of a hat from suggestions placed in it by several of the original founders.

In the mid-19th century Hastings, the nearby city of Prescott, Wisconsin, and the adjacent township of Nininger were areas of tremendous land speculation, billed by Ignatius L. Donnelly as a potential "New Chicago". The Panic of 1857 put an end to this dream. The speculation and Panic caused the cities' growth to be less than expected given their location at the confluence of two significant rivers; today, their combined population is approximately 25,000, and all that remains of Nininger is a few buildings.

Hastings is the site of the second-oldest surviving county courthouse in the state (after Stillwater), finished in 1871 at a cost of $63,000. The county administration began the process of moving to a new facility in 1974, and in 1989 the City of Hastings purchased the old building. It was rededicated in 1993 as City Hall. 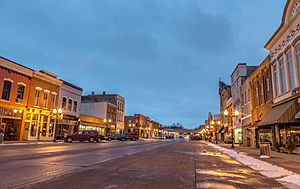 In 1895 a spiral bridge was built over the Mississippi River, designed to slow down horse-drawn traffic as it entered downtown. The novel design became a tourist attraction, but the bridge was demolished in 1951 because it could not handle modern vehicles.

In 1930, the Army Corps of Engineers completed Lock and Dam No. 2 at Hastings, part of the canal lock systems on the Mississippi that stretch from Minneapolis to St. Louis. Lock and Dam No. 2 is the site of the nation's first commercial, federally licensed hydrokinetic power facility, a partnership between the City of Hastings and Hydro Green Energy, LLC of Westmont, IL.

Hastings had its name affixed to two major Minnesota railroads, the Hastings & Dakota Railway and the Stillwater & Hastings Railway.

In 1867 civic leaders William LeDuc, John Meloy, Stephen Gardner, E. D. Allen, and P. Van Auken—with financial backing from investors John B Alley, Oliver Ames, William Ames and Peter Butler—incorporated the Hastings & Dakota Railway with the goal to "cross the Rocky Mountains and meeting the Pacific Ocean". During the 1870s the H&D was completed from Hastings all the way to the South Dakota border at Ortonville. During this time, the H&D became part of the Chicago, Milwaukee & St. Paul Railroad (Milwaukee Road) and become known as the H&D Division of the Milwaukee Road. The H&D also built the famous "Lake Street Depression" in Minneapolis, which gave the H&D two districts around Minneapolis and St. Paul: the south district from Hastings to Cologne via Chaska, and the north district from Hastings to Cologne via St. Paul/Minneapolis. While the H&D never made it to the Pacific on its own, the H&D Division became the mainline of the Milwaukee's Coast Extension to Seattle, which the Milwaukee completed in 1909.

In 1880 a new branch line called the Stillwater & Hastings was built between the two cities, which funneled logging and agriculture products from Stillwater to Hastings, allowing Hastings to become an important railroad switching hub. In 1882 the Milwaukee Road gained control of the S&H and operated it as a profitable branch line. The Milwaukee abandoned the entire S&H line in 1979, one year short of its 100th year of service. 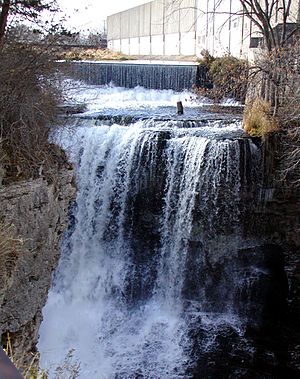 The falls of the Vermillion River

Today, the entire north H&D district remains intact from Minneapolis to Ortonville—except for the Lake Street Depression—and is operated by the Twin Cities & Western Railroad from Minneapolis to Hanley Falls and by BNSF Railway between Hanley Falls and Ortonville. Nearly all of the south H&D district was abandoned over time, with the last section between Shakopee and Cologne abandoned in the early 1970s. The Canadian Pacific Railway spur from downtown Hastings to the ConAgra mill atop the Vermillion Falls is all that remains of the south H&D district. The old H&D trestle over the Vermillion River at Hastings — which was replaced four different times — is now part of a bicycle path. The H&D bridge over the Minnesota River at Chaska remained until 1995, when it was removed by the Army Corps of Engineers as the Chaska levees were rebuilt. 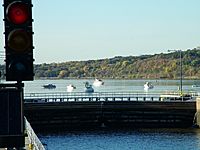 Boats lined up at Lock and Dam No. 2, Hastings, Minnesota

The busiest route in Hastings is U.S. Highway 61, which in Hastings is also known as Vermillion Street. Highway 61 is a four lane thoroughfare that cuts through the eastern side of the city in a north–south direction. Following Highway 61 north out of Hastings takes you over the Mississippi River via the Hastings High Bridge to Cottage Grove and eventually the city of Saint Paul, and taking Highway 61 south brings you to Red Wing. The current bridge, which carries 32,000 vehicles per day and is the busiest two−lane bridge in the state of Minnesota, Construction started on a new four lane bridge in late 2010 and was scheduled to be completed 31 May 2013.

The other major route in Hastings is Minnesota State Highway 55; the main east–west roadway. Highway 55 is also a four lane highway that enters the city from the west and cuts through the middle of town where it eventually comes to an end at Highway 61. Highway 55 is a major commuter route for residents of Hastings, taking them northwest to Eagan and eventually to the city of Minneapolis.

Highway 316 is a 10-mile highway that starts at Highway 61 in southern Hastings and heads southeast to Welch Township. It acts as a more direct shortcut between two points of Highway 61. Highway 316 is located just west of the Mississippi River. Highway 316 and adjacent Highway 61 are both part of the Great River Road. Highway 316 is also known as Red Wing Boulevard and Polk Avenue at various points throughout its route.

Highway 291 (Minnesota Veterans Home Highway) is a short, one mile roadway on the east side of Hastings that lies host to a Minnesota Veterans Home. Highway 291 is also known as East 18th Street and Le Duc Drive in Hastings. The roadway crosses the Vermillion River. On the same site of the Veterans Home are two drug and alcohol facilities; the first a sub-acute hospital called Dakota County Receiving Center, otherwise known as Dakota County Detox Center. The center was the first of its kind in Dakota County founded in the early 1970s by Bruce Foster. The other is the Cochran Halfway House.

Other routes that lead into Hastings are Dakota County Roads 42 (northwest side of town), 46 (southwest), 47 (southwest) and 54 (east).

Hastings is not served by the Metro Transit public transportation bus routes, but preliminary studies are underway to bring commuter rail to Hastings via the Red Rock Corridor. Amtrak trains pass through, but do not stop in Hastings (Prospective passengers must go north to St. Paul or south to Red Wing to board).

All content from Kiddle encyclopedia articles (including the article images and facts) can be freely used under Attribution-ShareAlike license, unless stated otherwise. Cite this article:
Hastings, Minnesota Facts for Kids. Kiddle Encyclopedia.