Fort Snelling is a former military fortification and National Historic Landmark in the U.S. state of Minnesota on the bluffs overlooking the confluence of the Minnesota and Mississippi Rivers. The military site was initially named Fort Saint Anthony, but it was renamed Fort Snelling once its construction was completed in 1825.

The U.S. Army supported slavery at the fort by allowing its soldiers to bring their personal enslaved people. These included African Americans, Dred Scott and Harriet Robinson Scott who lived at the fort in the 1830s as enslaved people. In the 1840s the Scotts sued for their freedom, arguing that having lived in “free territory” made them free leading to the landmark case Dred Scott v. Sandford. Slavery ended at the fort just before Minnesota statehood in 1858.

The fort served as the primary center for Government forces during the Dakota War of 1862. It also was the site of the encampment where the eastern Dakota and Ho-chunk non-combatants awaited riverboat transport in their forced removal from Minnesota when the hostilities ceased. The fort served as a recruiting station for the Civil War, Spanish American War, and both World Wars before being decommissioned a second time in 1946. It then fell into a state of disrepair until the lower post was restored to its original appearance in 1965. At that time all that remained of the original lower post were the round and hexagon towers. Many of the important buildings of the upper post remain today with some still in disrepair.

The historic fort is in the unorganized territory of Fort Snelling within Hennepin County, bordering Ramsey and Dakota counties.

There are now multiple government agencies that own portions of the former fort with the Minnesota Historical Society administering the Historic Fort Snelling site. The Minnesota Department of Natural Resources administers Fort Snelling State Park at the bottom of the bluff. Fort Snelling once encompassed the park's land. It has been cited as a "National Treasure" by the National Trust for Historic Preservation. The historic fort is in the Mississippi National River and Recreation Area, a National Park Service unit.

Lieutenant Zebulon Pike in 1805 acquired Pike's Purchase for the United States, comprising 100,000 acres (400 km²) of land in the area. Significant settlement began in the late 1810s. Following the War of 1812, the United States Department of War built a chain of forts and installed Indian agents between Lake Michigan and the Missouri River. These forts primarily protected the northwestern territories from Canadian and British encroachment. The Army founded Fort Saint Anthony in 1819.

Colonel Josiah Snelling commanded the 5th Infantry Regiment (United States). Its soldiers constructed the original Fort Saint Anthony from 1820 to 1824. During construction, most soldiers lived at Camp Coldwater, which provided drinking water to the fort throughout the 19th century. The post surgeon began recording meteorological observations at Fort Saint Anthony in January 1820, beginning one of the longest near-continuous weather records in the country. Upon its completion in 1825, the Army renamed the fort as Fort Snelling in honor of its commander and architect. 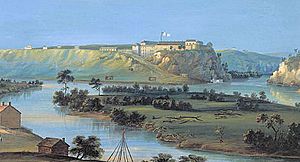 The soldiers at the northwestern frontier outposts tried to restrict commercial use of the rivers to United States citizens, keep American Indian lands free of white settlement until treaties permitted it, enforce law and order, and protect legitimate travelers and traders. At Fort Snelling, the garrison also attempted to keep the peace between the Dakota people.

Colonel Snelling suffered from chronic dysentery, and bouts of the illness made him susceptible to anger. Recalled to Washington, he left Fort Snelling in September 1827. Colonel Snelling died in summer 1828 from complications due to dysentery and a "brain fever". 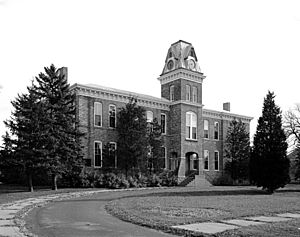 John Marsh, a native of Danvers, Massachusetts, came to the fort during the early 1820s. At the fort, he set up the first school for children of the officers. He also developed a good relationship with the local Sioux tribe, and developed a dictionary for the Sioux language. He had been studying medicine at Harvard for two years before deciding to leave school without earning a degree. He used this opportunity to "read medicine" under the tutelage of the post physician, Dr. Purcell. The physician died before Marsh completed the two-year course, so he still had no medical degree.

In 1830 Fort Snelling was the birthplace of John Taylor Wood, who later became known as a lieutenant in the Confederate navy, serving on board the Merrimack at the Battle of Hampton Roads.

John Emerson purchased the slave Dred Scott in Saint Louis, Missouri, but he later worked and lived at Fort Snelling during much of the 1830s, having brought Dred and his wife Harriet Scott with him. The Missouri Compromise made slavery illegal in Minnesota Territory. Emerson took the Scotts back to Missouri, a slave state, where they sued for their freedom and that of their daughters, because they had been held illegally in a free territory. A longstanding precedent of "once free, always free" was overturned in this case, and the United States Supreme court case of Dred Scott v. Sandford (1857) ruled that the Missouri Compromise was unconstitutional and that African Americans had no standing under the constitution.

Career Army officer and artist Seth Eastman had two tours here, the second a lengthy one in the 1840s when he commanded the fort. He did many paintings and drawings of the Dakota and other Native American peoples while here, and helped record their customs and lives. He was commissioned by Congress to illustrate the six-volume study of Indian Tribes of the United States by Henry Rowe Schoolcraft, which was published 1851-1857 with hundreds of his works. 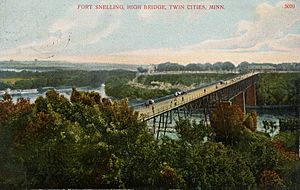 As the towns of Minneapolis and Saint Paul, Minnesota were developed in this area and increased in population, there was less need for a forward frontier military post in the region. The Army sold Fort Snelling to Franklin Steele in 1858 for $90,000. (Fortunately for Steele, the deal included 8000 acres (32 km²) later annexed into south Minneapolis.) 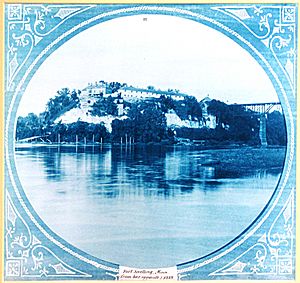 During the American Civil War, Franklin Steele leased Fort Snelling back to the War Department for use as an induction station. More than 24,000 recruits from Minnesota were trained here. During the Dakota War of 1862, the Army used it as the base of a concentration camp, holding hundreds of Dakota women, children, and elders as captives on the river flats below the fort through the winter of 1862–63. Hundreds died there. After the war, Steele leased the land around Fort Snelling to settlers, and Minneapolis began to expand into the fort's surroundings.

The United States Army assigned a garrison to Fort Snelling. The fort dispatched forces to protect the interests of the colonizers on the frontier from the Dakota people, westward to the Rocky Mountains. Soldiers from Fort Snelling fought in the Indian Wars and the Spanish–American War of 1898. 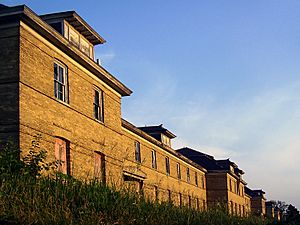 Through World War II, the War Department chose Fort Snelling as the location for the Military Intelligence Service Language School to teach the Japanese language to Army personnel. The War Department constructed scores of buildings for housing and teaching, and the school processed 300,000 soldiers. The school was relocated to Monterey, California after the war, in June 1946.

The War Department decommissioned Fort Snelling on 14 October 1946, and various federal agencies took parcels from the grounds of the old fort. The majority of the structures fell into disrepair. In 1960, it was listed as a National Historic Landmark, citing its importance as the first major military post in the region, and for its later history in the development of the United States Army.

The Minnesota Historical Society has converted the area of the original walled fort into an educational establishment, rebuilt to resemble its original appearance, and staffed during the spring, summer and early fall with costumed personnel interpreting life at the early post. Although restoring and re-creating the original fort assures its survival as a historical artifact for the foreseeable future, many briefly used buildings of the fort gradually fell into serious disrepair and neglect. In May 2006, the National Trust for Historic Preservation added Upper Post of Fort Snelling to its list of "America's Most Endangered Places". Some restoration on historic Fort Snelling continues, and crews removed the flagpole from the iconic round tower and placed it in the ground, a change since its opening as a historic fort.

The fort is located on Fort Snelling Unorganized Territory, an unincorporated area and division of Hennepin County lying just east of the city of Richfield. It is also adjacent to the cities of Minneapolis, Bloomington, Saint Paul (across the Mississippi River), and Mendota Heights (across the Minnesota River). The fort is located at the eastern end of the territory, near the confluence of the Mississippi River with the Minnesota River. 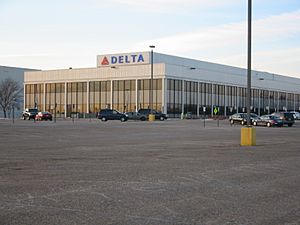 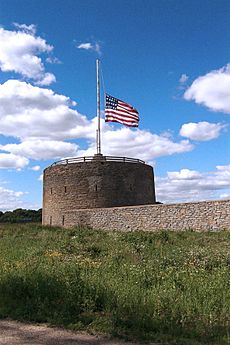 View of the Round Tower. The flag is at half-mast because former American President Ronald Reagan had died just prior to the day the photograph was taken.

Delta Air Lines Building C is located on the property of Minneapolis–St. Paul International Airport and in Fort Snelling. Delta uses it for northern and regional operations.

Prior to its disestablishment, Republic Airlines (1979–1986) had its headquarters in Building C. At various times both Mesaba Airlines and MAIR Holdings had their headquarters in the Fort Snelling UT.

All content from Kiddle encyclopedia articles (including the article images and facts) can be freely used under Attribution-ShareAlike license, unless stated otherwise. Cite this article:
Fort Snelling Facts for Kids. Kiddle Encyclopedia.