Fort Snelling State Park is a state park of the U.S. state of Minnesota, at the confluence of the Mississippi and Minnesota rivers. For many centuries, the area of the modern park has been of importance to the Mdewakanton Dakota people who consider it the center of the earth. The state park, which opened in 1962, is named for the historic Fort Snelling, which dates from 1820. The fort structure is maintained and operated by the Minnesota Historical Society. The bulk of the state park preserves the bottomland forest, rivers, and backwater lakes below the river bluffs. Both the state and historic fort structure are part of the Mississippi National River and Recreation Area, a National Park Service site.

As of 2005, the park hosts 400,000 visitors annually and contains the restored fort, a visitor center, 18 miles (29 km) of cross-country skiing trails, 18 miles (29 km) of hiking trails, and 5 miles (8.0 km) of biking trails. These trails connect the park to the Minnesota Valley National Wildlife Refuge, Minnehaha Park, and regional trail systems like the Grand Rounds Scenic Byway and the Big Rivers Regional Trail. Minnesota State Highway 55 crosses over the park on the Mendota Bridge, and many jets taking off and landing at the Minneapolis–Saint Paul International Airport fly directly over the park. 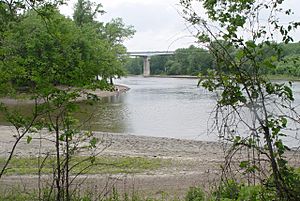 Confluence of the Mississippi and Minnesota Rivers

At the beginning of historical times, Mdewakanton Dakota lived in this area. The confluence of the Mississippi and Minnesota rivers was to them the center of the world. In 1805 Lieutenant Zebulon Pike met with the Mdewakanton on the island between the two rivers and negotiated the purchase of land along the blufftops. The treaty site is now known as Pike Island. Details of Fort Snelling, which was built between 1820 and 1825 on the land Pike acquired, are contained in its own entry.

The soldiers from Fort Snelling had gardens, livestock, bakery, and boat storage sheds in the low river valley. After the Dakota War of 1862, over 1600 Dakota men, women, and children were forcibly confined in a camp in this area through the winter of 1862–1863, before being expelled to Nebraska. Over the winter, approximately 300 died due to malnutrition, disease, and exposure.

During the 1950s, the state government had planned to build a freeway interchange and bridge over the site of the fort, prompting concerned locals and Russell W. Fridley, director of the Minnesota Historical Society, to call a meeting to examine how to preserve the fort. Eventually, the state agreed to build a tunnel underneath the fort, thus preserving the old structures. In 1960, A.R. Nichols, a landscape architect, submitted plans for a 2,400-acre (9.7 km2) park on the site. Based on a much earlier plan, this design would become the basis for the final form of the park. This caught the interest of Thomas C. Savage who wrote State Parks director U.W. Hella. Hella urged Savage to form an association of interested citizens which became the Fort Snelling State Park Association, putting money and public relations effort into the promotion of the park's establishment. While there was widespread support for preserving the old fortifications, some local landowners were not enthused about plans to purchase additional lands, claiming that the price the government proposed to pay was not adequate. In response, the Park Association began to raise funds privately to buy out at least some of the owners. A second consideration was whether or not the federal government would grant the actual fort property to the state as surplus land. 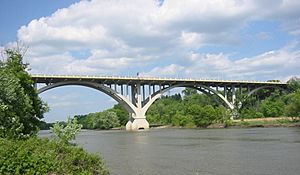 Most of the park lies in bottomland below busy highways and flight paths.

On the last day of the 1961 legislative session, a $65,000 appropriation was made and the park's boundaries were set (on a much smaller scale than can be seen today) so as to acquire the federal land. On October 29, the federal government donated 320 acres (1.3 km2) of land, including portions of the fort, to the State of Minnesota under the 1944 Surplus Property Act. The park was officially opened on June 3, 1962.

The restoration of the fort had begun as early as 1957, and with the establishment of the park, such efforts received new momentum. Old plans were found in the National Archives and the state legislature granted regular appropriations to fund the project until 1979. Limestone to match the original building material was taken from lands owned by the City of Saint Paul and the Webb Publishing Company. Eventually, the remaining half of the fort, which had been occupied by the Department of Veterans Affairs was also donated to the park and restoration of the entire fort could proceed. Structures including walls, the round tower, barracks, the commandant's house, gatehouse, magazine, school, and others were either restored or rebuilt to 19th-century condition. Workers went so far as to recreate the rough trowel tuckpointing of the original stone blocks. Controversially, WPA murals from the 1930s were removed from the interior of the tower.

All content from Kiddle encyclopedia articles (including the article images and facts) can be freely used under Attribution-ShareAlike license, unless stated otherwise. Cite this article:
Fort Snelling State Park Facts for Kids. Kiddle Encyclopedia.