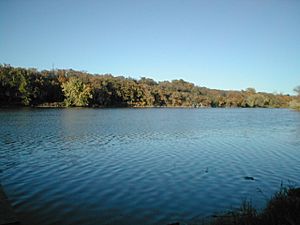 View of the Minnesota River from Memorial Park; southeast of Granite Falls, MN.

The Minnesota River is a river in the United States. It is in the northern United States, in the state of Minnesota. It is a tributary of the Mississippi River. It is about 534 km long.

The source of the river is a lake in western Minnesota. The lake is called Big Stone Lake. The lake is on the border between the state of Minnesota and the state of South Dakota. From its source, the Minnesota flows southeast. At Mankato, it turns northeast. It joins the Mississippi just south of the cities of Saint Paul and Minneapolis.

The Minnesota River was formed after the last ice age in North America.

All content from Kiddle encyclopedia articles (including the article images and facts) can be freely used under Attribution-ShareAlike license, unless stated otherwise. Cite this article:
Minnesota River Facts for Kids. Kiddle Encyclopedia.