Mankato is a city in Blue Earth, Nicollet, and Le Sueur counties in the State of Minnesota. The population was 41,044 according to 2015 US census estimates, making it the fifth largest city in Minnesota outside of the Minneapolis–Saint Paul metropolitan area. The county seat of Blue Earth County, it is located along a large bend of the Minnesota River at its confluence with the Blue Earth River. Mankato is across the Minnesota River from North Mankato. Mankato and North Mankato have a combined population of over 53,000, according to the 2010 census. It completely encompasses the town of Skyline. North of Mankato Regional Airport, a tiny non-contiguous part of the city is located within Le Sueur County. Most of the city of Mankato is located within Blue Earth County.

Mankato is the larger of the two principal cities of the Mankato-North Mankato metropolitan area, which covers Blue Earth and Nicollet counties and had a combined population of 94,149 at the 2010 census. Mankato was designated a Metropolitan Statistical Area by the U.S. Census Bureau in November 2008.

The area was long settled by various cultures of indigenous peoples. After European colonization began on the East Coast, pressure from settlement and other Native American tribes caused different peoples to migrate into the area. By the mid-nineteenth century Dakota language–speaking four divisions of the Dakota Sioux were the primary indigenous group in the territory. 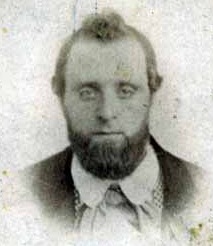 Mankato Township was not settled by European Americans until Parsons King Johnson in February 1852, as part of the nineteenth century migration of people from the east across the Midwest. New residents organized the city of Mankato on May 11, 1858. The city was organized by Henry Jackson, Parsons King Johnson, Col. D.A. Robertson, Justus C. Ramsey, and unnamed others. A popular story says that the city was intended to have been named Mahkato, but a typographical error by a clerk established the name as Mankato. According to Upham, quoting historian Thomas Hughes of Mankato, "The honor of christening the new city was accorded to Col. Robertson. He had taken the name from Nicollet's book, in which the French explorer compared the 'Mahkato" or Blue Earth River, with all its tributaries, to the water nymphs and their uncle in the German legend of Undine.'...No more appropriate name could be given the new city, than that of the noble river at whose mouth it is located." While it may or may not be true that the city was intended to be called Mahkato, the Dakota called the river Makato Osa Watapa (meaning "the river where blue earth is gathered." The Anglo settlers adapted that as the Blue Earth River. Notwithstanding the above history of the name for town of Mankato - Dakota word for Blue Earth, according to Frederick Webb Hodge, in his "Handbook of American Indians North of Mexico," Volume 1, page 801, the town was named after the older of the two like-named chiefs of the Mdewakanton division of the Santee Dakota, whose village stood on or near the site of the present town.

Ishtakhaba, also known as Chief Sleepy Eye, of the Sisseton band of Dakota Indians was said to have directed settlers to this location. He said the site at the confluence of the Minnesota and Blue Earth Rivers was well suited for building and for river traffic, and yet safe from flooding. 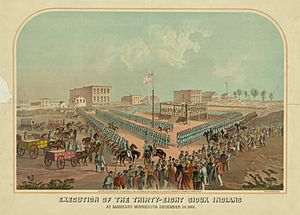 Execution of the thirty-eight Sioux Indians at Mankato Minnesota, December 25, 1862

On December 26, 1862, the US Army carried out the largest mass execution in U.S. history at Mankato following the Dakota War of 1862. Thirty-eight Dakota Native Americans were hanged for their parts in the uprising. A military tribunal had sentenced 303 to death. President Lincoln reviewed the record and pardoned 265, believing they had been involved in legitimate defense against military forces. Episcopal Bishop Henry Benjamin Whipple had urged leniency in the case, but his position was not politically popular in Minnesota. Lincoln's intervention was not popular at the time. Two commemorative statues are located on the site of the hangings (now home to the Blue Earth County Library and Reconciliation Park). 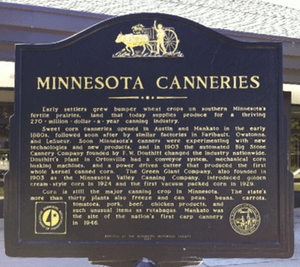 Mankato has a humid continental climate, type Dfa (hot summer subtype). Winters are cold, with snow cover (continuous most winter seasons) beginning typically between mid-November and mid-December, ending in March most years. However, Mankato often receives less snow than areas to its north and east. For example, Minneapolis, 75 miles northeast of Mankato, averages over 54 inches of snow per winter season, compared to Mankato's seasonal average of 35 inches. The coldest month, January, has an average monthly temperature around 14 degrees F. A significant hazard during winter is dangerously low wind-chill temperatures, as Arctic air outbreaks rush into the area from Canada, borne on high winds; this can bring ground blizzard conditions, especially in nearly rural areas. Summers are warm, with occasional but usually brief hot, humid periods, often interspersed with pushes of cooler air from Canada, often preceded by showers and thunderstorms. The warmest month, July, has an average monthly temperature around 73 degrees F. Precipitation falls year round, but falls mostly as snow from December to February, sometimes March, and as showers and thunderstorms during the warmer season, from May to September. Mankato's average wettest months are from June to August, with frequent thunderstorm activity. Mankato lies on the northern fringe of the central United States' main tornado belt, with lower risk than in Iowa and Missouri to the south. The highest-risk months for severe thunderstorms and (rarely) tornadoes, are May through July. However, a very unusual early tornado swarm affected areas within 20 miles of Mankato on March 29, 1998, when an F3 tornado hit St. Peter, 13 miles to Mankato's north.

There were 14,851 households out of which 22.5% had children under the age of 18 living with them, 35.0% were married couples living together, 9.0% had a female householder with no husband present, 3.7% had a male householder with no wife present, and 52.2% were non-families. 30.9% of all households were made up of individuals and 9.4% had someone living alone who was 65 years of age or older. The average household size was 2.35 and the average family size was 2.91.

There were 12,367 households out of which 23.6% had children under the age of 18 living with them, 36.7% were married couples living together, 8.8% had a female householder with no husband present, and 51.0% were non-families. 32.2% of all households were made up of individuals and 9.9% had someone living alone who was 65 years of age or older. The average household size was 2.31 and the average family size was 2.90. 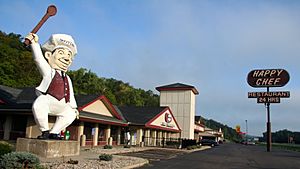 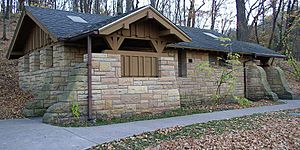 Public transportation in Mankato is provided by the Mankato Transit System. The city is served by Mankato Regional Airport which has no commercial flights. Under MnDOT's 2015 State Rail Plan, Mankato is listed as a Tier 1 Corridor for regional rail service from Minneapolis and/or St. Paul.

The following routes are located within the city of Mankato.

All content from Kiddle encyclopedia articles (including the article images and facts) can be freely used under Attribution-ShareAlike license, unless stated otherwise. Cite this article:
Mankato, Minnesota Facts for Kids. Kiddle Encyclopedia.